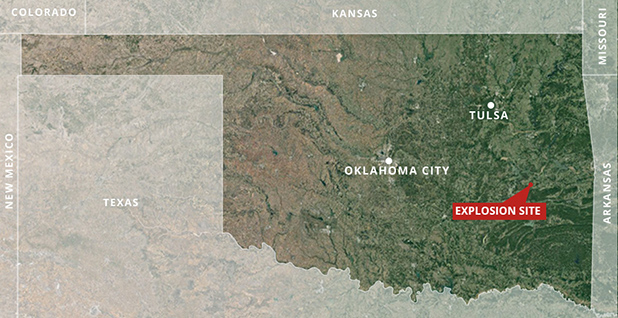 The operator of the Oklahoma well that burned in January, killing five men, was trying to save money and impress investors with a risky drilling method, say attorneys for the dead men’s families.

"It’s error after error after error," said David Rumley, a Corpus Christi, Texas, attorney representing the families of two of the men who died in the fire. "This entire thing could have been prevented if these companies had done what they were supposed to do."

Lighter drilling mud, in addition to being cheaper, created a bigger flare at the site, which was used to persuade investors that the well was more productive, Rumley said.

And a control room door was broken and blocked, he said. It could have let them escape to safety, but instead, the bodies of the workers were found stacked up against it.

The accusations, based on more than a dozen depositions taken by the plaintiff attorneys, are included in amended lawsuits filed this week in Pittsburg County, Okla., against Red Mountain, rig owner Patterson-UTI Energy Inc. and other companies.

The filings contain the most cohesive explanation yet for the blaze, which was the deadliest oil disaster since the 2010 Deepwater Horizon explosion in the Gulf of Mexico and one of the worst oil field accidents in U.S. history (Energywire, Jan. 24).

A federal workplace safety investigation led the Occupational Safety and Health Administration (OSHA) to seek penalties against employers involved, but the agency did not offer a cause for the accident. OSHA did not issue any citations for a blocked control room door. State regulators finished their investigation without pointing to a cause or taking any punitive action.

The U.S. Chemical Safety Board has issued an update of its investigation, detailing what happened the day of the fire, but it hasn’t made any findings about the cause. The agency plans to issue a final report by the middle of next year (Energywire, Aug. 17).

An attorney for Red Mountain Energy declined comment. A representative of Patterson-UTI did not respond to a request for comment. Rumley said the two companies are each blaming the other as the case heads toward a mediation session within the month.

Drilling "mud" is thick fluid used to cool the drill bit and control pressure inside the well. Other companies drilling in the same area used significantly heavier mud, according to the suit, which lists the names of about 30 nearby wells where heavier mud was used.

As Red Mountain planned the well, service companies sent proposals that involved using heavier mud, which also involved spending more money, according to the suits. Once drilling was underway, the drilling engineer shot drone footage of the 40-foot flare and put it to music ("Thunder," by Imagine Dragons) to market to investors. Lighter mud created a bigger flare, and a bigger flare implied more production.

The night before the fire, a Patterson crew member asked Red Mountain’s on-site manager to use heavier mud, according to the suit, urging him to "mud up."

Red Mountain instructed its company men to "keep the mud weight in their back pocket," the suit says.

The next day was Jan. 22. Red Mountain’s well site was in Pittsburg County, near Quinton, Okla., about 100 miles southeast of Tulsa.

The crew pumped the oil-based mud into the bore as it withdrew the long string of drill pipe, according to the CSB report. As the bit assembly came out of the hole, gas and mud began flowing out of the well, and it ignited in less than a minute. The rig burned for about eight hours.

Rig workers are trained to head to the control room, or "doghouse," as a safe place when things go wrong, Rumley said. The doghouse is supposed have a purging system to remove gases, and the back door is supposed to be a path to safety. But the purge system wasn’t working in Patterson’s doghouse, and the "non-operational" door hadn’t been fixed. Patterson has long had a troubled worker safety record.

The CSB reported that two other workers tried to activate the well’s blowout preventer after the fire started, using another set of controls, but it didn’t fully close.

Red Mountain went back and completed the well after the fire using heavier drill mud, Rumley said (Energywire, May 18).

Beyond damages, the lawsuits seek punitive damages in the form of 25 percent of the net worth of Patterson, Red Mountain and other companies named.

"The only way you can punish a company is to hit it in the pocketbook," said Rumley, who also disputes Patterson’s assurance to investors that the company has adequate insurance to cover losses from the fire.