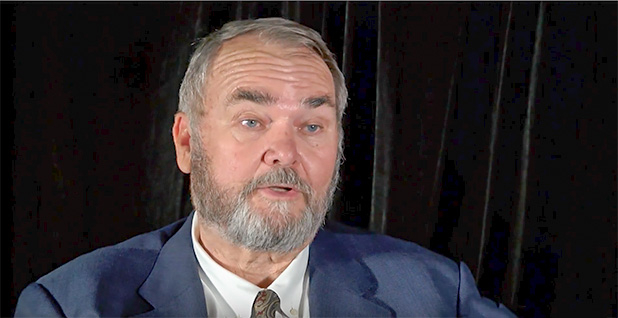 EPA officials and an Oklahoma oil industry executive quietly collaborated on a plan to scrutinize uncertainty in climate science.

Newly released emails show that Randy Foutch, CEO of Tulsa-based Laredo Petroleum Inc., pitched EPA Administrator Scott Pruitt last year on an academic effort to assess the accuracy of climate models. Pruitt’s staff subsequently consulted with Foutch and officials at the University of Texas, Austin, Energy Institute, where Foutch sits on an advisory board, according to emails recently released to the Natural Resources Defense Council under a Freedom of Information Act request. The effort came as Pruitt publicly played up the uncertainties in climate science and pushed a separate "red team, blue team" effort aimed at poking holes in established climate research.

Foutch sent an email to Pruitt in April 2017, suggesting the agency could help develop a study that would assess climate models that are used to make future predictions about global warming. That email was sent to Andy Miller, a career employee and EPA’s associate director for climate in the Office of Research and Development to inquire about Foutch’s idea. Miller spent months communicating directly with Foutch about climate models and the study, the emails show.

"On April 20, 2017, Mr. Randy Foutch (CEO of Laredo Petroleum) sent an email to Administrator Pruitt suggesting an academic-based study of climate model accuracy be undertaken, and seeking guidance on how to submit a proposal for such a study," he wrote. "Mr. Foutch’s email was forwarded to me to respond on behalf of the Administrator."

Over the course of the next year, officials from EPA and the university talked about how the effort might take shape.

"[A]t various points we discussed with the EPA (by phone many months ago, and also in person in April) the possibility of convening a group of experts from around the nation (or world) to look at climate modeling through the lens of uncertainty," said Michael Webber, deputy director of the Energy Institute and a mechanical engineering professor. "The scope of such an effort varied in our conversations from something as simple as a one-off meeting to something as grand as a multi-year, multi-million dollar collective effort."

Under Pruitt, EPA has worked to reshape the way the agency uses science and has reworked its science advisory boards to amplify industry voices. These emails show how Pruitt’s staff worked with the oil and gas industry to develop new research that could ultimately be used to attack regulations. Climate models are used to predict future conditions under climate change, such as sea-level rise, heat waves and drought intensity; the projections also inform government policies and regulations. Those who reject established climate science have long turned to model accuracy as a way to infuse doubt into the field of research.

Webber said his university would be uniquely positioned to conduct a new analysis of climate models.

"[W]e work closely with government agencies, industry, and environmental groups, so we thought we could provide safe harbor for an intellectual conversation," he wrote in response to emailed questions. "If industry hosted such a gathering, then environmental groups might be suspicious; if government hosts the meeting then industry might be suspicious; and so forth. But the idea was that if UT brought people together, we could play the role of a fair arbiter or mediator."

The effort appears to be stalled, at least for now. Webber said the university doesn’t have many climate modeling experts and couldn’t conduct a rigorous study on its own. EPA officials did not comment on the specifics of the effort, other than to say that "there is no study underway or being discussed."

Emails show that EPA officials participated in a conference call about the climate initiative in January 2018 with UT Austin Energy Institute officials, as well as energy executives serving on the school’s advisory board. The call included: Ron Hulme, CEO of Parallel Resource Partners, a private equity firm focused on the oil and gas sector; Jack Randall, managing partner of Jefferies Randall & Dewey Inc. and director of XTO Energy; and Jack Broodo, business president of feedstocks and energy at Dow Chemical Co.

Richard Yamada, Pruitt’s deputy assistant administrator for the Office of Research and Development, was also on the call. Yamada previously worked for Republicans on the House Science Committee who have spent years targeting the work of federal climate scientists. At EPA, Yamada has helped advance a number of the committee’s priorities, including the proposed science transparency rule that would restrict the type of research the agency is allowed to use in crafting regulations.

Miller, the EPA career official, wrote that an objective of the call was to find an area of common ground between scientists and industry.

"I conveyed these perspectives to Mr. Foutch in a subsequent conversation, and we agreed that a core problem is a lack of trust between the scientific and practitioner communities," he wrote in a summary sent to other EPA officials in advance of a phone call with the institute. "Mr. Foutch and I also agreed with many of the people I had talked with that providing an opportunity for frank discussions between these two communities could be a step toward an expanded dialog across what has become a highly politicized and seemingly impenetrable barrier. We also agreed that the perspectives of both communities were critical if any progress was to be made on the issue of climate change."

EPA officials were careful to characterize the effort as being independent of Pruitt’s proposed "red team" climate debate. After communicating for months, EPA officials and Foutch agreed to pause their project, which Miller referred to a "climate dialog," because of the media attention of the climate science debate that Pruitt was planning. But as the "red team" project stalled after pressure from the White House late last year, Miller and Foutch revived the project.

The Energy Institute at UT Austin has been criticized in the past for close connection to the oil and gas industry and for producing research aligned with industry claims. In 2012, the school produced a groundwater study that showed no pollution from hydraulic fracturing, or fracking. The Public Accountability Initiative, a nonpartisan watchdog research group, claimed that study had relied on misleading, selective language that yielded industry-friendly talking points not supported by the research itself.

The Energy Institute report only focused on the process of fracking itself, not other aspects such as disposal of wastewater. The institute professor who wrote the report was also a paid member of an energy company board, the Public Accountability Initiative noted in its analysis of the report.

Foutch had told EPA officials that he was affiliated with the University of Texas.

"Following my reply to Mr. Foutch, he contacted me directly and we began a series of discussions about such a study," Miller wrote in an email. "Mr. Foutch noted that, in addition to his position as CEO, he was also the Vice Chair (now Chair) of the Advisory Board for the University of Texas-Austin Energy."

Foutch did not respond to a request for comment for this story.

Andrew Rosenberg, director of the Center for Science and Democracy at the Union of Concerned Scientists, warned that a valid analysis of climate studies should not be led by EPA, but rather by NOAA or NASA.

What’s more, if a federal agency wanted to conduct a study of this nature, it should put out a proposal, not talk to only one academic institution, he said. More notable and strange, he said, is that the entire process originates with a fossil fuel company executive.

"There is nothing wrong with doing studies on certain kinds of precision on either climate models or any other kind of models, and that’s being done all the time by lots of different places. What seems a little odd is that there is this immediate response to fossil fuel industry people who are trying to get the EPA, which is obviously a government agency, to do specifically this study related to an institute that they advise," he said.

EPA’s Miller mentioned in the emails that he reached out to researchers at NOAA, the National Academy of Sciences and EPA to "gather additional perspectives on this idea." The emails do not reveal those perspectives because his summary was redacted before they were publicly disclosed.