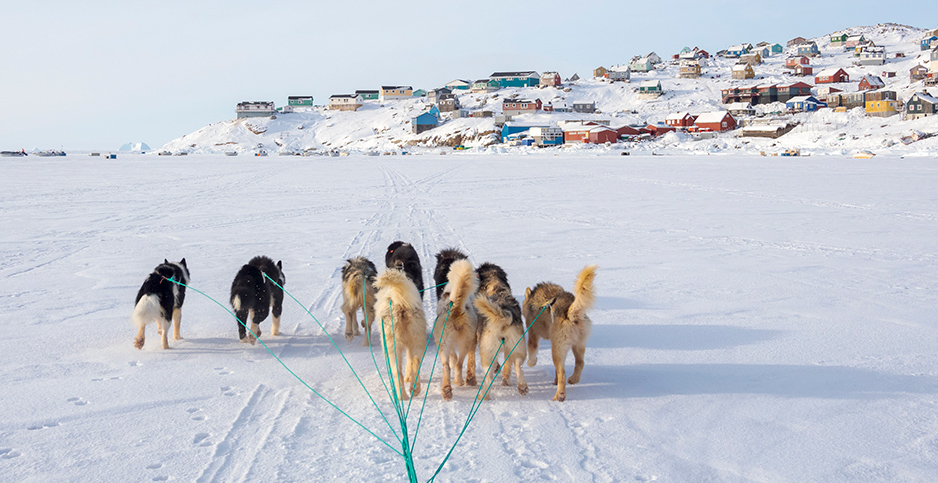 A team of sled dogs approaches a village in northern Greenland. New research shows that Arctic ice is melting faster than anticipated by scientists. Martin Zwick/Newscom

Sea ice in the coastal Arctic may be thinning far faster than scientists believed.

Ice in places like the Kara, Laptev and Chukchi seas, which border parts of Siberia and Alaska, appears to be shrinking nearly twice as fast as estimates have suggested, according to a study released yesterday.

That’s likely because previous research didn’t completely account for a key variable in the Arctic: the influence of climate change on snow.

Measuring sea ice thickness is a tricky business. Unlike sea ice extent — the amount of ocean covered by ice at any given time — the thickness can’t be measured by looking at satellite images.

Instead, scientists use special satellite instruments to send out radar pulses, which hit the ice, bounce back and tell them the height of the ice that’s poking out from the surface of the water. This information helps them calculate the thickness of the ice.

The whole process is "a bit like shouting at a wall a long way away and waiting for the echo to come back," said Robbie Mallett, a Ph.D. student at University College London and the new study’s lead author.

But there’s a catch.

As snow builds up, it can weigh down the ice, causing it to sit lower in the water. That means scientists must account for the amount of snow on top in order to accurately estimate the thickness of the ice.

Until recently, many research groups were using a snow map developed with data collected by drifting stations scattered across the ocean. The map tells scientists how deep the snow is at different times of the year in different parts of the Arctic.

The trouble is that the data is decades old.

The map doesn’t really account for changes in the sea ice over time, particularly changes caused by Arctic warming.

"When it was developed, the Arctic was mostly covered with multi-year ice," said Nathan Kurtz, a NASA sea ice expert who commented on the new research for E&E News.

Multi-year ice has survived more than one season, and it’s typically much thicker than first-year ice. But in the last few decades, research suggest, the warming Arctic has seen much of its multi-year ice disappear. The younger ice that remains hasn’t had as much time to accumulate snow.

That means the older snow map may not reflect all the realities of the new, warmer Arctic.

The new study uses a more dynamic snow model to estimate ice thickness in the coastal Arctic seas. It finds that ice thickness tends to fluctuate much more dramatically from one year to the next than previous studies have suggested.

It also finds that ice is getting thinner over time — and that these thinning trends are much steeper than previous research indicated.

Sea ice thickness is a less talked-about trend than sea ice extent. But thinner, more fragile ice could have serious implications for both the Arctic climate system and human activities in the Arctic Ocean.

Thinner ice breaks more easily, melts faster in the summer and allows more sunlight to reach the water below. It may accelerate Arctic warming and cause ice extent to shrink even faster. It may make shipping and oil drilling easier, but ice fishing and hunting more difficult, particularly for Indigenous communities.

Sea ice thickness also helps inform climate models, which make projections about how the Arctic will change in the future. That means it’s important that the data is accurate.

The new study shows the importance of using up-to-date snow measurements. And it demonstrates how different snow maps produce different results in specific regions of the Arctic.

But it’s not the first to point out the issue.

About a decade ago, scientists began modifying the older snow map to update it for a warmer Arctic with younger ice, Kurtz said.

"It seemed to work reasonably well, but still kind of limited," he said. "When we get better techniques, better model data, it’s better to start moving towards that."

NASA, for instance, has developed its own model that it’s using in studies conducted by ICESat-2, a satellite mission investigating polar climate change, including the height and thickness of the world’s ice. It’s similar to the snow model used in Mallett’s new study, according to Kurtz, the NASA scientist.

At the same time, a 2019 special report from the Intergovernmental Panel on Climate Change pointed out that there’s still little data available about the depth of snow on sea ice. It’s a key limitation on estimates of sea ice thickness, the report suggested.

But there are some trends that are fairly obvious. Arctic sea ice, on average, has gotten thinner over the last few decades as older ice has disappeared and younger ice has taken its place.

While scientists are working on improving their estimates of exactly how fast the ice is thinning and where, better snow data is a step in the right direction, Mallett said.

"It’s possible that for the sea ice enthusiasts that do track sea ice thickness, it’s about to be a lot more interesting," he said.