O’Malley — ‘The planet would literally burn up’ under Clinton 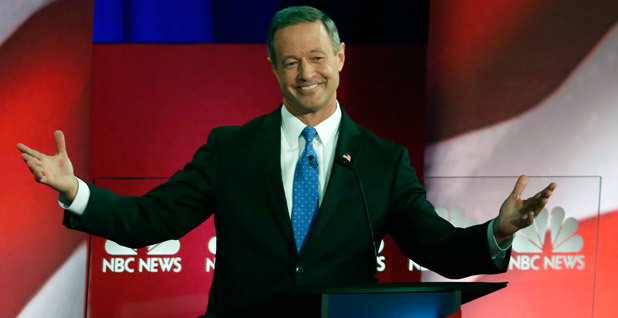 Former Maryland Gov. Martin O’Malley is polling weak among Democratic presidential contenders but is hitting his opponents hard on climate change ahead of the Iowa primaries. Photo courtesy of AP Images.

Former Maryland Gov. Martin O’Malley accused Hillary Clinton of failing to pursue action against climate change adequately, saying in an interview with ClimateWire that the planet would "literally burn up" under her plan.

The assertion comes as O’Malley scrambles for footing in a presidential primary race that has left him with almost imperceptible polling results one week before Iowa caucusgoers cast the first decision of 2016.

His comments indicate he sees climate change as a potentially pivotal issue that he can use to attract passionate voters in the progressive wing of the Democratic Party. He’s also betting that Iowans see him as a leader on an issue that all three candidates are describing as a threat to the nation.

O’Malley acknowledged that he needs a surprising finish in Iowa to help rescue his flagging campaign. That success in part depends on the assumption that Democratic voters are intensely aware of specific climate actions offered by him, Clinton and Sen. Bernie Sanders of Vermont.

Clinton proposed a goal in July to install 500,000 solar panels by 2020, expanding the presence of rooftop photovoltaic technology sevenfold. That fits into her broader plan to provide 33 percent of the nation’s electricity with renewable power by 2027.

Unlike O’Malley and Sanders, Clinton is not proposing a nationwide carbon price, the favored policy of many economists and environmental organizations. O’Malley seized on that and suggested that Clinton is sparing large commercial sources of emissions from federal action.

"I also believe that under her climate plan, the planet would literally burn up," O’Malley said. "I mean, her plan is a voluntary solar panel plan for residential energy. That’s only about one-third of our energy consumption."

The sharpening rhetoric signals the arrival of the campaigns’ closing arguments before the Iowa caucuses next Monday. Clinton holds a narrow lead at about 49 percent, according to an average of polls calculated by RealClearPolitics. Sanders has staged a steady climb upward over the fall, putting him 6 or 7 percentage points behind the former secretary of State. A CNN/ORC survey last week showed Sanders leading Clinton by 8 points. O’Malley is at about 6 percent.

"Will she support a carbon tax?" the campaign asked in a statement aimed at raising doubts about the strength of Clinton’s commitment.

John Podesta, chairman of Clinton’s campaign and a former adviser to President Obama, struck back in a post on Medium that provided a list of Clinton’s objectives. Podesta’s involvement also conveys Clinton’s effort to be seen as the successor to Obama’s landmark climate policies.

The candidates have good reason to sell themselves as the top climate protector, said Karlyn Bowman, a senior fellow at the American Enterprise Institute. She pointed to polling in September in which 23 percent of Democratic likely voters said the issue is extremely important to them in the election.

"You want to activate those voters because they can be really important on Election Day," she said. "At the margins in close elections, you’ve really got to pay attention to these small [categories of] votes."

O’Malley said Iowans are interested in rising temperatures because of the impacts they’re seeing on agriculture and other aspects of rural life. He also said they have a sophisticated understanding of the economics around renewable energy.

Iowa is third among states in renewable energy generation, and 27 percent of its electricity came from wind power in 2013, according to the U.S. Energy Information Administration.

O’Malley acknowledges that Sanders’ climate objectives are similar to his. He explains this by saying Sanders "copied much in our climate plan." There are differences between the candidates. O’Malley says his plan goes further by proposing that the nation could derive 100 percent of its electricity from non-emitting sources by 2050.

"He was very late arriving, I think, with his climate plan," O’Malley said of Sanders. "And that wasn’t lost on people in Iowa, where I’ve spent more time. A lot of the climate activists, people that care about this issue the most, are with us."

He added, "So I believe that we have a better plan than what he has. And once more, I have executive experience from having been a governor, so I understand these issues of decoupling [utility rates] and of the issues of doing solar carve-outs and the other things that have to happen at a state level."

Campaign spokespeople for Clinton and Sanders did not respond to requests for comment.

‘Huge difference’ between O’Malley and Clinton

Others don’t see consequential differences between the candidates’ positions.

"I think all three of the Democratic candidates, quite frankly, are very strong on the climate change issue," said Sen. Ben Cardin (D-Md.). "I know the governor is very sincere, and I know he really feels deeply on it, and I think that’s important."

"I think across the board our candidates are really strong on that," he said. "On the other side, the Republican candidates are so awful that they even conditioned their interlocutors to not bring up the subject, so we now have debates in which there’s never a question on climate change."

In response, O’Malley suggested that establishment Democrats were overlooking lapses in Clinton’s plan because she’s the front-runner.

"They probably haven’t compared them," O’Malley said. "There’s a huge difference between my plan and that of Secretary Clinton. I mean, just on their face and the goals that they set. But look, the establishment, they … ah, how do I say this in a positive way? Individual voters get the same vote that every member of Congress gets in a presidential campaign."

There’s also a practical reason for Clinton to adopt a more limited proposal, said Larry Hamilton, a professor at the University of New Hampshire. She’s running a primary campaign that’s designed to resonate with the more centrist electorate of a general election.

It also insulates her against attacks from the eventual Republican nominee, he said.

"They’re advocating much more detailed plans," Hamilton said of Sanders and O’Malley. "It’s practical, but all that stuff could boomerang against them in the general election, because the idea of increasing the price on anything could be poison."