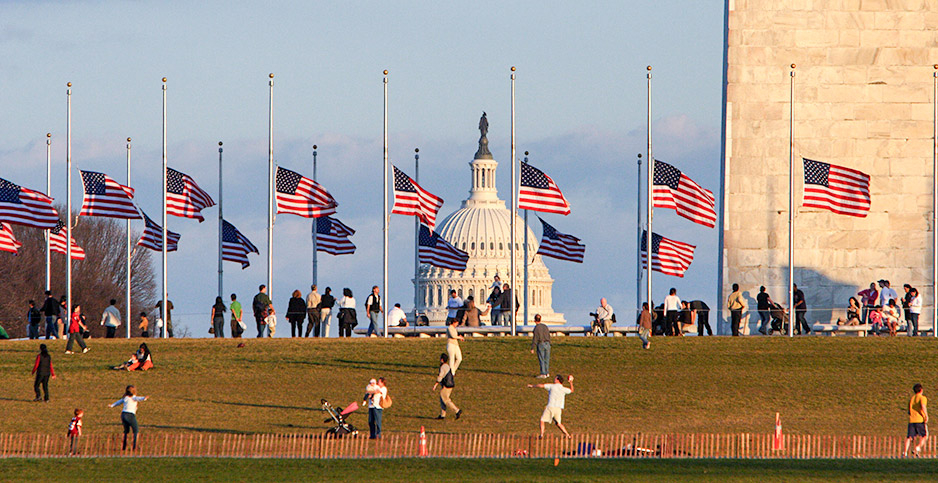 Flags fly at half-staff on the National Mall in this 2007 file photo. ehpien/Flickr

Newly released emails show how the National Park Service struggled hard to respond to the death of Sen. John McCain on Aug. 25, uncertain of how to fly its flags to honor the Arizona Republican.

The confusion began early Aug. 27, when reporters started calling Park Service personnel to ask why flags at the Washington Monument were flying at half-staff while they were at full staff at the White House.

At 2:01 p.m. that day, an Interior Department official forwarded on a notice from the Department of Homeland Security, saying, "*****FLAG ACTION NOTIFICATION (NATIONAL)**** PLEASE DISREGARD – CANCELLED."

"Good afternoon all, Please cancel the half staffing notification that was sent out this morning," said Dante Jeffries, program manager at Interior.

But Jeffries would soon correct himself. In a 2:09 p.m. email, he said, "I am sorry for the confusion, please keep the flag at half-staff."

The move to keep the flags at full staff after McCain’s death was seemingly at the direction of the White House. One Park Service official said as much the morning of Aug. 27.

"I talked to Jenny and she said they normally get notified by the WH and the WH is saying full staff. So they are still looking in to it," wrote Chelsea Sullivan, who works in NPS’s communications office.

The exchanges are contained in 139 pages of emails obtained by E&E News in a request made under the Freedom of Information Act.

E&E News filed a similar FOIA request with the Department of Homeland Security, where its National Protection and Programs Directorate gives notice to agencies on how their flags should be presented. DHS turned over eight pages of emails that were heavily redacted and gave little sense of how that department handled the confusion over flags.

"Inspectors, Back to half staff," said one email, forwarding a message that included President Trump’s proclamation to lower flags in McCain’s honor issued the afternoon of Aug. 27 after the day’s earlier confusion.

The emails show NPS workers across the country — in Washington, Denver, Atlanta and Omaha —- scrambling to keep pace with the conflicting signals from the Trump administration.

The White House first lowered the flags Aug. 25 and then raised them the morning of Aug. 27, only to lower them again later in the day after a public outcry.

Dee Carden, from ABC’s assignment desk, was one of the first to raise questions: "Does the National Park Service follow a certain protocol?"

A reporter from HuffPost asked what guidance NPS had received: "Heard from one employee who said they got three emails with notes to lower, not lower, then lower."

Matthew Alexander, a producer for "The Rachel Maddow Show," wrote: "Was this order canceling the prior order a mistake?"

As the number of queries grew, the Park Service sought to portray the issue as business as usual.

Barnum replied to Alexander with what would become the agency’s response of the day: "Matthew, in response to your question, the National Park Service, like other federal agencies, follows government-wide ‘flag action notifications’ provided by the U.S. Department of Homeland Security National Protection and Program Directorate. These notifications direct actions to be taken with flags that fly at federal buildings and sites."

As the confusion grew, NPS workers sought advice on how to respond to calls from the public.

"We’ve been getting calls all morning," wrote Jenny Anzelmo-Sarles, a spokeswoman for the National Capital Region.

Alexandra Picavet, chief of communications with the Midwest Region, asked Barnum if NPS should craft a "one or two line response" to explain the situation to the public.

"I have never seen one of these before," she wrote.

At one point, Mike Litterst, chief of communications for the National Mall and Memorial Parks, sent press queries to Heather Swift, the chief spokeswoman for Interior Secretary Ryan Zinke.

And he followed up with Anzelmo-Sarles, telling her not to comment to reporters for now.

"Jeremy and I just spoke; we’ll have no response until he gets direction from the Department," Litterst wrote.

Trying to find a solution, Gasser turned to The New York Times, sending Barnum part of a story that outlined what usually happens.

"The United States flag code provides for the lowering of the American flag on the day of the death of a member of Congress and the following day," Gasser wrote in the email, quoting the newspaper.

Later, at 3:45 p.m., Lisa Mendelson, an acting regional director, sent an email to superintendents after she had consulted with P. Daniel Smith, the NPS acting director.

"We are trying to ensure consistency in flag flying. I just spoke with Dep Dir Dan Smith — he conveyed that flags should remain half-staff this afternoon and overnight (for those that fly 24 hours.) Tomorrow, barring any other direction, flags should be flown full mast."

After receiving a final order from the White House at 4:01 pm, the Park Service announced that it would fly its flags at half-staff until the evening of Sept. 2, the day of McCain’s interment.

Click here to read the National Park Service’s emails on lowering flags in honor of McCain.