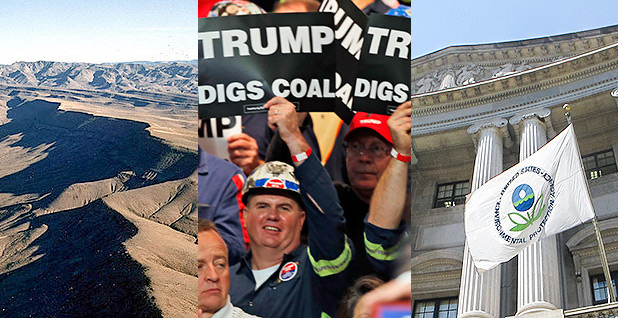 Congressional leaders reached a bipartisan deal last night to fund the government through the rest of the year that avoids steep cuts for U.S. EPA and renewable energy programs sought by the Trump administration.

The bill would also provide a long-sought, permanent fix to guarantee health care benefits for retired union coal miners and their widows. It does not contain many of the policy riders sought by Republicans to ease environmental regulations.

Lawmakers need to approve the $1.017 trillion deal by the end of the week and avoid a federal shutdown when current, stopgap funding expires late Friday. The legislation would provide funds for the final five months of the fiscal year, which runs through Sept. 30.

Appropriators have spent months negotiating the omnibus package, which will include all 11 remaining fiscal 2017 spending bills. In advance of the deal, federal agencies have been operating under fiscal 2016 spending levels with little flexibility in making budget changes.

"It is time we complete this essential work. It is a solid bill that reflects our common values and that will help move our nation forward," said House Appropriations Chairman Rodney Frelinghuysen (R-N.J.) in a statement.

The largely level spending for the agency is a far cry from the steep cuts the Trump White House was pressing for. The administration’s blueprint for next year would cut EPA appropriations by a third and shed more than 3,000 jobs.

Similarly, Congress does not seem eager to address the Trump administration’s push to make steep cuts to energy research and development, including for cleaner power sources.

The measure would provide $2.1 billion for DOE’s Office of Energy Efficiency and Renewable Energy, a $17 million increase over current spending. And it would give the Advanced Research Projects Agency-Energy (ARPA-E), which President Trump wants to eliminate, $306 million. Fossil energy research and development would get $668 million.

The National Oceanic and Atmospheric Administration, which the administration has targeted over its climate research spending, would receive $5.68 billion, a $90 million reduction.

However, NOAA’s Ocean and Atmospheric Research programs would see a small increase to $477.7 million, with climate research funded at $158 million. The legislation also includes $75 million for a new ocean survey vessel and $329 million for new polar weather satellites.

The bill does not include any money for the international Green Climate Fund. But it also does not prohibit such spending, Democratic appropriators said in their summary of the proposal.

The National Park Service, Bureau of Land Management, and Fish and Wildlife Service would see slight funding increases. Overall, the Interior Department would get $12.3 billion, $42 million more than enacted levels.

The legislation also includes $56 million for the park maintenance backlog and a nonprofit foundation to help BLM with its mission. The omnibus would provide $400 million for the Land and Water Conservation Fund, $50 million less than enacted levels.

The Office of Surface Mining Reclamation and Enforcement would get $253 million, including abandoned coal mine dollars, roughly the same as enacted levels.

The legislation has another pot of more than $100 million for reclamation that also helps economic development in coalfield communities.

The agreement does provide President Trump the $25 billion boost he had sought for the Defense Department, although $2.5 billion of those funds will require him to first give Congress a plan for defeating the so-called Islamic State group.

The omnibus does not contain any money for building the wall along the U.S.-Mexico border, a Trump priority that has been widely panned by environmentalists. Instead, the measure will spend $1.5 billion for technology, repairs to existing infrastructure and personnel to enhance security along the nation’s southern border.

In a victory for backers of federal research, the National Institutes of Health will see its funding increased by $2 billion to around $34 billion. Earlier this year, the administration had proposed more than $1 billion in cuts for the medical research agency. The National Science Foundation would see its budget largely frozen at $7.47 billion.

Democrats signaled they were likely to get behind the omnibus and sought to portray it as refutation of many of President Trump’s policy proposals.

"This agreement is a good agreement for the American people, and takes the threat of a government shutdown off the table," said Senate Minority Leader Chuck Schumer (D-N.Y.) in a statement noting that "poison pill" policy riders were dropped in the final agreement.

Democrats did agree to some existing or less controversial riders, like the prohibition on changing the definition of fill material under the Clean Water Act and reiterating the law’s limits in agricultural areas.

The legislation does not seem to include construction of an emergency road through the Izembek National Wildlife Refuge in Alaska, a priority for top appropriator Sen. Lisa Murkowski (R-Alaska), chairwoman of the Energy and Natural Resources Committee.

And even though lawmakers had said the bill would include fresh funding for the Yucca Mountain nuclear waste disposal site, the fate of such dollars is unclear in summaries and legislative text.

House Minority Leader Nancy Pelosi (D-Calif.) said Democrats got 160 GOP riders dropped from the bill and pressed for more than $1 billion for coal miners’ benefits. She, however, stopped short of endorsing the deal, saying it will need to be reviewed by the full caucus in the coming days.

The White House also has yet to officially endorse the deal, although the administration has been involved with the budget talks. The House Rules Committee is meeting tomorrow to set debate parameters for the legislation.

Click here to read the bill and spending summaries.