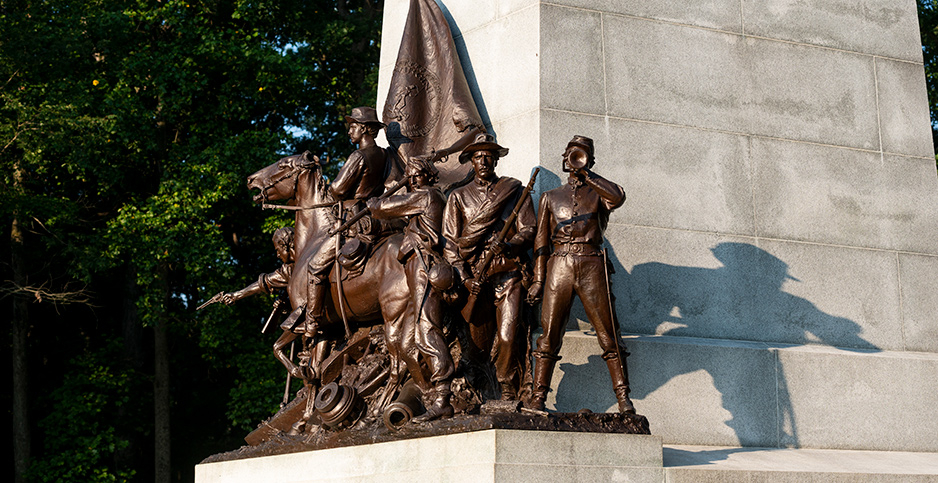 A push to ban Confederate symbols at national parks in a year-end spending bill may not pan out this Congress.

Over the summer, against the backdrop of nationwide protests against police brutality against Black individuals and a large-scale reckoning on race relations in America, the House was able to quietly pass an agency spending bill calling for the renaming and removal of national park assets honoring Confederate figures.

But the lack of debate or public controversy surrounding the inclusion of these policy riders at the time never guaranteed they would eventually get signed into law — especially now, with the outgoing president furious with a similar provision in the latest defense authorization.

As congressional negotiators work toward an agreement on a massive fiscal 2021 omnibus spending package, there is radio silence about the fate of the Confederate provisions included in the House-passed Interior-Environment bill.

These provisions would force the National Park Service to remove "all physical Confederate commemorative works, such as statues, monuments, sculptures, memorials, and plaques."

Additional language in the House measure would bar NPS from spending money on buying or displaying a Confederate flag "with the exception of specific circumstances where the flags provide historical context."

The legislation would also require the Interior secretary to submit to Congress "an inventory" of all assets bearing Confederate names under the agency’s jurisdiction.

The Senate’s draft Interior-Environment spending bill, released in recent weeks, did not contain these provisions.

And senior appropriators in both parties and chambers are refusing to comment on ongoing discussions about how to merge the two versions.

Talks are at a delicate juncture: Friday was supposed to be the deadline to pass legislation averting a government shutdown across all federal departments, though the Senate is expected tomorrow to clear a one-week, stopgap spending bill to buy negotiators some more time (see related story).

Ned Adriance, spokesman for Sen. Tom Udall of New Mexico — the top Democrat on the Senate Interior-Environment Appropriations Subcommittee — said only that "there are a number of important issues that need to be resolved in order to finalize the Interior bill, and Sen. Udall is working hard to ensure the final product is one that he and Democrats can support."

Several sources told E&E News they were hearing few grumbles for or against the riders, usually a clear sign that something is a nonissue in these types of legislative negotiations. This could be a good thing for the riders’ survival.

In July, when the House debated the Interior-Environment spending bill, the only members who brought up the provisions were Democrats, who praised their inclusion (E&E News PM, July 24).

Republicans who ended up opposing the larger bill, including House subcommittee ranking member David Joyce of Ohio, cited dozens of reasons for not liking the legislation — none of them having to do with the Confederate imagery bans.

It was the opposite scenario from 2015, when a Democratic amendment to bar Confederate flags from national parks caused such upheaval among Southern conservatives that Republicans, who held the House majority at the time, chose to pull the Interior-Environment appropriations bill from the chamber floor hours before a scheduled vote on final passage rather than let the public relations nightmare play out any longer.

But ignoring the riders is not the same as supporting them. And without strong Republican support, Democrats could have a hard time making the case for them to make the final cut.

Democrats are contending with a volatile White House, with President Trump threatening to veto the fiscal 2021 National Defense Authorization Act over language requiring the renaming of military bases that honor Confederate figures.

Trump hasn’t said he would veto an omnibus spending bill that puts further restrictions on Confederate imagery on public lands. The president does, however, have a track record of opposing the renaming and removal of Confederate monuments, contending extremists want to rewrite history.

He has tweeted his disappointment the NDAA would target national monuments — confusing the language in the defense bill relating to military bases with that of the Interior-Environment measure that addresses national parks (E&E Daily, Dec. 4).

"A provision is in the NDAA for the renaming, or even desecration, of National Monuments in National Parks," he tweeted last week. "This is not what our Country wants!"

In another tweet, Trump said the defense legislation must, among other things, "preserve our National Monuments." The House already passed the NDAA, and the Senate may follow suit as soon as today.

The White House press office and the Office of Management and Budget would not say whether Trump would issue a veto threat on the omnibus if it includes Confederate imagery prohibitions in the Interior-Environment title. The Interior Department also declined to comment on the veto question.

One administration aide, however, referred E&E News to its statement of administrative policy from over the summer regarding a section of the House’s Defense appropriations bill, where a provision would have had the same effect as the NDAA’s requirement that military bases honoring Confederate soldiers must change their names.

"President Trump has been clear in his opposition to politically motivated attempts like this to rewrite history and to displace the enduring legacy of the American Revolution with a new left-wing cultural revolution," the policy statement reads.

There is increasing suspicion among some congressional aides that Democrats might let it go this time, restricting for now their fight against memorializing the Confederacy to the NDAA — a "must-pass" measure that almost always passes with strong bipartisan support, unlike an omnibus that can alienate fiscal conservatives.

After all, Democrats might argue, they could have another chance next year with President-elect Joe Biden in the Oval Office.