Omnibus, taxes in limbo as leaders near COVID-19 deal 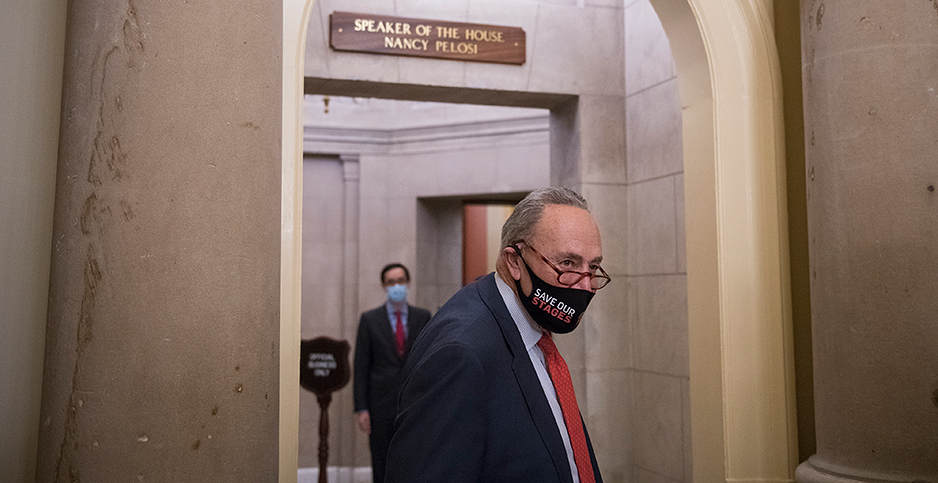 Top House and Senate lawmakers are citing progress following late-night talks on a COVID-19 relief deal, with the fate of an omnibus spending package and a rumored agreement on tax extenders hanging in the balance.

McCarthy also sounded an optimistic tone. "I think we’ve built a lot of trust. I think we’re moving in the right direction," he said last night. I think there’s a possibility of getting it done. So we’re finalizing out to see if it’s possible. Let us keep working."

The two sides were trading offers late into the night on COVID-19, hours after McConnell announced that the 116th Congress won’t adjourn until there’s an accord.

"We are going to stay here until we get a COVID package, no matter how long it takes," McConnell told reporters.

Schumer said only that the two sides were "getting closer" to an agreement as he left the Capitol last night.

The expected vehicle for a relief deal remains the 12 fiscal 2021 spending bills, which were very close to being finalized last night and could be released today, a House aide said. Those bills will need to be in place by this Friday to avoid a government shutdown when current spending runs out at midnight.

Appropriators have said for weeks that they were near a deal for fresh agency spending, and that has not changed in recent days.

If Congress falters, lawmakers would need to pass another stopgap. One option could be a very short-term funding measure that would buy leaders a few extra days to negotiate and then move the package over during the weekend or early next week.

Measures that could ride on the omnibus include:

Lobbyists said that House and Senate tax writers have agreed to a tax extenders package, but a decision on whether to include it in a COVID-19 relief package will be up to the leaders of both parties.

Details were scant, although modifications of the phase-down schedule for the renewable and investment tax credits have been under discussion in recent days, as has a change in the "start construction" date of the so-called 45Q incentive for carbon capture and sequestration.

One lobbyist said yesterday that it appears the tax-writing committees "either have a solid deal, or they have something that’s the next closest thing to a solid deal that could be pasted into a larger package."

"And another thing we know is that they do not intend to merely process a rubber stamp one year for everybody that expires in 2020," the lobbyist added.

The driver for the push is broad bipartisan support for legislation that would make the current federal excise tax rates for alcohol beverage producers permanent, thereby heading off an increase that would otherwise kick in Jan. 1.

Senate Finance Chairman Chuck Grassley (R-Iowa) said yesterday that the craft beverage fix "for sure will be extended," while signaling that other unnamed incentives are under consideration for a broader agreement.

"I think there is quite a drive to do more than just a one-year extension," Grassley told reporters on a conference call.

Energy tax incentives have not really been in play in stimulus talks, despite the inclusion of a broad clean energy tax title in the $1.5 trillion infrastructure package, H.R. 2, that the House passed in July.

As talks continue on COVID-19 relief, two members of the bipartisan Senate group that is pushing a $908 billion pandemic package said yesterday that leaders have signaled that $748 billion of the plan would likely be incorporated into whatever deal that emerges.

Maine Republican Sen. Susan Collins said that "some version" of the plan was likely to be included in a final deal.

However, the fate of a second bipartisan proposal from the group that includes $160 billion in emergency aid for state and local governments as well as liability provisions is unclear.

McConnell yesterday reiterated his call for dropping the two most contentious sticking points until the next Congress and administration, but Schumer repeatedly declined to comment on whether Democrats were willing to punt on state and local funds — a top priority for months.

"On state and local, everyone knows my position," he said. "It has broad bipartisan support."