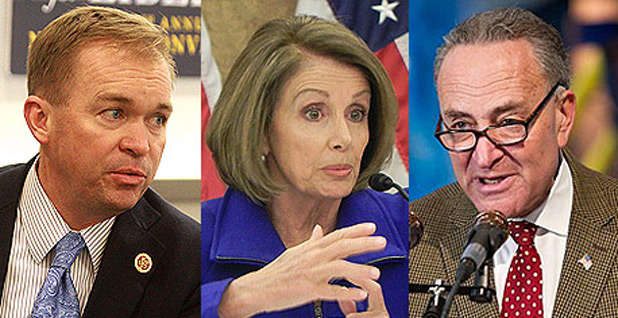 Office of Management and Budget Director Mick Mulvaney called on Congress to cut spending for the rest of the current fiscal year but ran into opposition from their own party and Democratic leaders Rep. Nancy Pelosi of California and Sen. Chuck Schumer of New York. Photos byGage Skidmore/Flickr (Mulvaney), Medill DC/Flickr (Pelosi), Bill Ingalls/NASA (Schumer).

Coming in at 1,665 pages, the fiscal 2017 omnibus package that Congress hopes to clear this week could be the biggest bill lawmakers move this year.

The House Rules Committee is meeting to discuss it later today, with the full House likely to vote as soon as tomorrow. The Senate would take it up soon after.

The legislation offers some good news for environmentalists, energy research and bipartisanship, but it also sends a warning to the Trump administration and reflects continuing Republican antipathy toward the Paris climate deal.

Here are some winners and losers:

Greens: Environmentalists celebrated because lawmakers rejected President Trump’s proposed cuts to U.S. EPA and some federal climate change efforts and urged Congress to put up a fight against future anti-environment riders. "The worst parts of Trump’s proposals have been fended off thanks to massive public pressure on Congress that culminated in hundreds of thousands marching in D.C. and across the country on Saturday," said Sierra Club Executive Director Michael Brune. The group said the spending deal still favored polluters, but it may be the best it could have gotten under Trump and a Republican Congress.

Sen. Joe Manchin: After a six-year fight, the United Mine Workers of America and its congressional allies secured more than $1 billion for health care coverage for more than 20,000 retired miners and widows. Manchin, a West Virginia Democrat, was the measure’s loudest champion and is certain to tout the victory as he fights for re-election in 2018. Manchin, however, has been unable to secure a similar pension rescue, and House Speaker Paul Ryan (R-Wis.) cheered potential Senate hopeful Rep. Evan Jenkins (R-W.Va.) for his work on the issue.

Appropriators: After months of promising they could reach a bipartisan deal, and amid calls from conservatives and the president for deep cuts, appropriators delivered a bill with fresh spending for numerous agencies. That’ll be a tough act to repeat for fiscal 2018, with the White House expected to be more aggressive in pushing its priorities. But in an era of intense partisanship, they showed there is still room for deal making.

Biomass: Environmentalists were frustrated with the inclusion of a provision that would allow forest biomass to be considered carbon-neutral, a move long supported by paper and wood manufacturers. Backers call the rider a key step toward biomass gaining acceptance as a renewable energy. Critics warn it emits high levels of carbon and encourages deforestation.

DOE boosters: Several Energy Department research efforts would see modest funding increases for the coming year. Despite calls by the White House for its eventual elimination, the Advanced Research Projects Agency-Energy would get a $15 million boost to $306 million. The Office of Science, the main source of funds for the national laboratories, would get a small increase to $5.4 billion. And energy efficiency programs would get a $40 million boost to $761 million.

Great Lakes: Congress is not interested in ending the Great Lakes Restoration Initiative program that the Trump administration believes would be better left to states. The program received level funding of $300 million with support from a large bipartisan group of Great Lakes lawmakers. They are likely to keep the program under federal control for the foreseeable future.

Payments in lieu of taxes: Negotiators provided a modest boost to $465 million for the federal payment program that is popular with Western lawmakers who use the aid to help shore up state and local budgets. Trump has said he wants the plan scaled backed, but Congress seems unwilling to give up the popular perk.

President Trump: The self-proclaimed master negotiator, who wrote a book called "The Art of the Deal," came up short in his first round of spending talks with Congress. He dropped his demand for border wall money and saw his push for steep domestic cuts ignored, and in the end lawmakers largely shut him and his agenda out of the talks. Congressional leaders seemed eager to send the White House a message: They still control the federal pursue strings.

Paris Agreement: The deal does not include any money for the United Nations’ Green Climate Fund, but advocates noted it would not explicitly prohibit such spending. It’s an indication that Trump and the Republican Congress intend to honor the Paris Agreement and climate pledges "only in the breach," said Paul Bledsoe, a former Clinton White House aide who is now a senior fellow on energy at the Progressive Policy Institute. While the United States may be "staying in," it may not do much to comply.

Energy tax breaks: Democrats made a late push to include orphaned renewable energy tax credit extensions in the omnibus, but that effort came up short as it did two years ago on another wrap-up spending bill. Talk of incentives may return if Congress makes good on its promise for a broad rewrite of the federal tax code this year.

Land conservation: The Interior Department’s Land and Water Conservation Fund took a $50 million cut over current funding to $400 million. While the LWCF has enjoyed some bipartisan support, the reduction could embolden critics who want an overhaul of the program before they agree to extend it when its current authorization runs out at the end of fiscal 2018.

Fusion: Funding for DOE’s fusion energy office would fall by about 13 percent, to $380 million. Appropriations for construction of the International Thermonuclear Experimental Reactor — an international project with more than 30 countries under construction in France to demonstrate fusion at scale — would fall by more than half, from $115 million to $50 million. The bill stipulates DOE "may" provide an additional $50 million.

Sanity and sleep: Why is it that these budget deals and their multiple pages of provisions are always announced after midnight?

Correction: A previous version of this story misstated the percentage cut to DOE fusion research funds in the omnibus spending bill.