On anniversary of Biden’s EJ order, is Justice40 delivering? 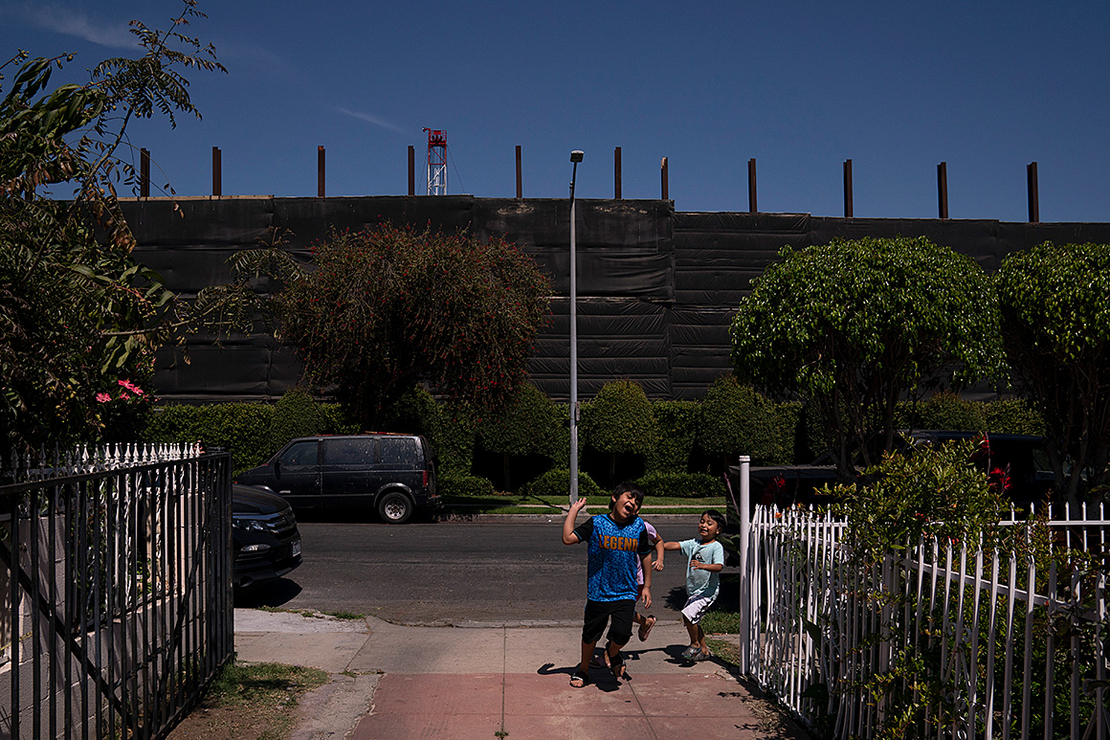 Children play outside their home near an oil drill site enclosed by tall fences in Los Angeles in June 2021. AP Photo/Jae C. Hong

Today is the one-year anniversary of Justice40, President Biden’s landmark environmental justice commitment to funnel an unprecedented level of federal investment to communities injured by decades or centuries of neglect.

In an executive order released only one week after he took office, the president promised that disadvantaged communities would see 40 percent of the total benefits of climate and infrastructure spending — an influx of capital that would go toward redressing past imbalances that have left marginalized communities without basic services and disproportionately exposed to harms from pollution and climate change.

But one year later, the White House and federal agencies are still struggling to set Justice40 in motion. It is unclear how, or if, it is being applied to spending already underway, including from last year’s Covid-19 recovery bill and the $1.2 trillion infrastructure law that could prove to be Biden’s largest legislative achievement.

In a fact sheet celebrating today’s anniversary, the White House referenced billions of dollars in federal funds — including infrastructure package spending — which it said was “being reimagined and transformed to maximize benefits to disadvantaged communities through the Justice40 Initiative.”

“Over the past year, senior administration leaders have worked tirelessly to secure historic and long overdue investments in environmental justice,” the White House said.

But as money from the infrastructure bill begins to roll out, the White House Office of Management and Budget is still reviewing 20 plans from departments and agencies for how to implement Justice40.

These deal with issues central to how the 40 percent commitment would be applied, including how to quantify and account for the benefits for and who would get them.

In total, CEQ says Justice40 will cover hundreds of programs across the 20 federal agencies.

To be sure, the infrastructure bill includes money for issues of particular concern to communities of color — like access to clean water and public transportation, and resources to clean up Superfund and brownfield sites that threaten health and quality of life.

But Justice40 makes — or at least appears to make — a very specific promise: that underserved communities will experience 40 percent of the good achieved through federal climate and clean energy spending.

It’s a commitment that requires an accounting, and the accounting system is still being built.

Peggy Shepard, a co-chair of the White House Environmental Justice Advisory Council (WHEJAC), told E&E News in a recent interview that the administration had assured its members that 40 percent of the infrastructure bill’s benefits would flow to disadvantaged communities.

“You know, we were certainly told by [the White House Council on Environmental Quality] that those monies are subject to Justice40,” said Shepard, who serves as executive director of the New York-based nonprofit We Act for Environmental Justice. “When we raise that question, we’re told that there is a preliminary guidance and that Justice40 is going forward. And that, yes, those monies will be targeted to front-line communities. That’s what we’re being told.”

Asked how Justice40 figured in early infrastructure bill spending like the $2.2 billion in expenditures the Army Corps of Engineers announced last week, CEQ pointed E&E News to its interim guidance for Justice40 and to an executive order issued on Nov. 15, 2021, one week after the bipartisan package passed Congress, that promises the bill’s funding would be spent “equitably.”

It provides a working definition for the kinds of communities that would be targeted for the funding commitment and some general guidelines to agencies for the programs that would be covered and requirements for stakeholder consultation. It also establishes 21 pilot projects to test drive Justice40 implementation.

But departments and agencies are left to propose their own methodologies for how to satisfy the commitment, and that’s what they’ve done through the submissions now at OMB.

Shepard said those haven’t all been shared with the EJ advisory council. But the few departments that have briefed one of the council’s subcommittees, including the Transportation and Energy departments, have offered formulas for implementation that vary widely — including what a “benefit” is.

“All of the agencies have looked at these things differently and have different methodologies, which CEQ seems to say is fine,” Shepard said.

CEQ is preparing to release a scorecard next month that would evaluate agency plans for Justice40. And the White House’s final implementation guidance, along with a new geospatial screening tool CEQ is developing with the U.S. Digital Service, could bring more uniformity to the program.

But that work has gone into overtime. The final guidance and the screening tool were originally intended to be completed last year, according to the interim guidance. The screening tool, which is the first of its kind on the federal level, has been shared with experts in a beta form, and they have expressed concerns about it.

Meanwhile, agencies and departments are already making plans for how to put infrastructure bill dollars to work quickly, and the Covid-19 recovery money has been substantially spent.

“I don’t want to do financial autopsy after the fact, when we have an administration that has different priorities and we’re forgotten about yet again,” Lopez-Nunez said.

She and other advisory council members have raised concerns about the administration’s focus on “benefits” from climate and clean energy spending, rather than offering a more concrete — and easier to quantify — commitment. They say a set proportion of appropriated dollars could accrue to targeted communities.

“It opens this up to loopholes and creative accounting, which we see in government a lot, as you know,” Lopez-Nunez said, with “programs that might actually harm communities being counted as a benefit to communities.”

The Department of Transportation, which will play a hefty role in implementing the infrastructure bill, has a history of funding freeways that bifurcate communities of color for the benefit of suburban commuters. Would the benefits from those kinds of projects be counted toward Justice40 because of their proximity to front-line neighborhoods?

“How do you know that that’s what a community wants, and not necessarily what somebody behind an office desk decided would benefit a community?” Lopez-Nunez said.

Mallory, in remarks yesterday at a public meeting of the EJ advisory council, compared implementing Justice40 to “steering a giant cargo ship in a new direction.”

“But make no mistake: through the bureaucratic machinery of guidance documents and program reviews, we are turning that ship on a new course,” she said.

“It’s still a work in progress,” said Michele Roberts, national co-coordinator at the Environmental Justice Health Alliance for Chemical Policy Reform. “But the thing is that it has been created, and you have credible people working on that.”

But Cecilia Martinez, the career-long environmental justice advocate Biden tapped for that post, left the White House this month even as work continues on crucial elements of Justice40. CEQ says Martinez gave notice weeks in advance, but it took many outside the government by surprise.

The White House has yet to say who will fill that position or replace David Kieve, the recently departed CEQ official who conducted outreach to the environmental justice community. And some EJ advisory council members say the administration has been slow to fill environmental justice jobs at CEQ and other agencies.

For example, EPA has yet to fill an environmental justice lead position that was proposed as part of the fiscal 2022 budget last year. An EPA spokesperson told E&E News that the agency plans to discuss the idea with OMB and congressional committees.

CEQ says that, even with the departure of Martinez and Kieve, there are six staff members devoted to environmental justice and numerous others who work on it as part of their portfolio. There were none during the Trump administration.

“Every one of us is sharply focused on keeping the president’s promises on environmental justice,” she said.

But Nicky Sheats, who directs the Center for the Urban Environment at New Jersey’s Kean University and is an EJ advisory council member, said the administration needs more expert staff.

“I appreciate the all-of-government approach, but I think there needs to be a core there, a team of people that are just devoted to EJ,” Sheats said. “When they go to sleep at night and when they wake up in the morning their last thought and their first thought is about EJ — how are they going to implement EJ within the government? Because I think that’s a huge job.”

Correction: A previous version of this story had one reference to “two-thirds” of benefits. The Biden administration’s Justice40 commitment is that underserved communities will receive 40 percent of the overall benefits from climate, clean energy, infrastructure and related programs across the federal government. The story also previously included an incorrect affiliation for Michele Roberts.