On Kodiak Island, flywheels are in and diesel is 99.8% out 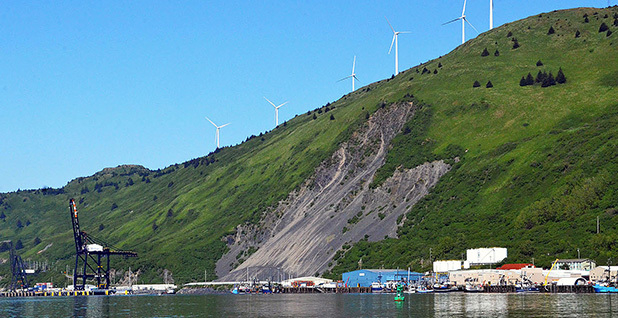 KODIAK, Alaska — Darron Scott, CEO of the Kodiak Electric Association, unlocked the door to a small building on a gravel road along Chiniak Bay and pointed to two innocuous metal boxes tucked into a corner beyond a bank of computers.

"Those are the flywheels," Scott said, turning on a computer screen to follow the ebb and flow of the system’s electrical output.

More than a mile down the coast, a 340-foot-tall electric crane operated by Matson Inc. shipping company lifted a series of heavy metal cargo containers from the shore and transferred them onto the deck of a waiting ship.

Each time the regenerative crane raised a container into the air, it pulled electricity from the flywheel energy storage system. As it lowered its load, electricity flowed back to the flywheels.

"It’s sort of like a Toyota Prius," Scott explained. "When you hit the brake [on the car], you actually make power, which goes back into the battery.

"Well, the crane does the same thing," he said. "When the crane drops the load, it will actually inject power back into the flywheels, which helps speed them back up again. The flywheel has just enough time to get recharged as the crane gets ready to pick up the next box for the next lift."

KEA’s two flywheels can each store up to 1 megawatt of electricity. That’s enough power to lift a heavy cargo container from the dock and move it to the ship.

Matson’s $10 million electric gantry crane, which looks like a giant praying mantis perched along the island coast, began operations in Kodiak just this winter. The new machine is twice the size as the rusty, 40-year-old diesel-powered machine that it replaces.

Company officials say the new crane, the largest in Alaska, is designed to accommodate the new generation of wider container ships. The process of loading a vessel can take four to eight hours, depending on the size of the shipment and the weather conditions, according to Scott.

KEA was initially reluctant to agree to provide power to the shipping company’s energy-gobbling electric crane. After all, the cooperative’s electric grid is designed to supply energy to the region’s 13,000 residents, as well as the city’s small businesses, massive fish processing plants and U.S. Coast Guard Air Station Kodiak. It also serves the island communities of Chiniak, Pasagshak and Port Lions.

On an average day, KEA’s customers use about 17 MW of power, with demand climbing to 20 MW during the island’s peak fish processing season.

Scott said the initial request to install a large electric crane came from Horizon Lines Inc., which owned the local shipping company before it was acquired by Honolulu-based Matson.

"The company called us a few years ago, and our first reaction was, ‘No. We’re not set up for this,’" Scott said, referring to the vast amount of energy the crane would draw. "We have to balance our electric system at all times. And the crane has the ability to go from 0 to 2 MW [of electrical demand] in a couple seconds."

But after studying the project and the potential solutions, KEA joined forces with Matson and the city of Kodiak to buy the $3 million flywheel system to manage the crane’s fluctuating electricity demand.

The flywheels are just the latest addition to the company’s impressive lineup of renewable energy systems. Roughly 76 percent of KEA’s electricity comes from hydroelectric energy, with wind providing another 23 percent. The utility also relies on a storage battery system and the flywheels to back up its variable wind systems.

In total, the electric cooperative provides a remarkable 99.8 percent of its power from renewable sources of energy. The shift away from diesel energy has been good news for Kodiak residents, who now pay less per kilowatt-hour of electricity than they did in 2001.

It’s also brought Kodiak praise from high places. During President Obama’s visit to Alaska last fall, he applauded Kodiak as "the first in the world to put flywheel and battery energy storage together to stabilize its variable electric power from wind turbines."

Cutting back on a costly diesel habit

Kodiak Island, the nation’s second largest island, is a lush, green 3,600-square-mile landmass with snow-capped mountains and rocky bays. The island is accessible only by boat or airplane and is located about 250 miles south of Anchorage at the edge of the Gulf of Alaska.

Inhabited by Alutiiq natives for thousands of years, the island was settled by Russian trappers in the 18th century.

After the Japanese bombed the Aleutian Islands during World War II, Kodiak became the heart of the U.S. government’s Alaska military operations. Remnants of concrete lookout posts, gun emplacements and other installations are still scattered across the island.

During Alaska’s devastating 1964 earthquake, the island was hit by a 30-foot tsunami that killed 15 people and wiped out several communities and businesses. The quake also changed the shape of the island, raising some coastal lands by as much as 30 feet.

Since then, Kodiak has grown into one of the nation’s top five fishing ports in both volume of seafood caught and monetary value. Fish processing plants dot its shoreline, and commercial and recreational fishing boats fill the harbor. The island is also known for the Kodiak bears that crowd the rivers during the region’s abundant salmon runs.

When KEA’s Scott moved to Kodiak in 2000, the electric cooperative was providing almost 70 percent of the community’s power needs from the Terror Lake Hydroelectric Generating Station, a hydro unit fed by a remote high-altitude lake located 25 miles outside of town.

The other 30 percent came from diesel generators powered by expensive fuel oil that was regularly brought to the island on barges.

Kodiak’s hydroelectric unit was one of four dams built in southern Alaska in the 1980s by the Alaska Energy Authority to lower the communities’ reliance on expensive diesel power.

In 2001, Kodiak, along with the other Alaskan communities served by the dams, bought the four hydropower units from the state and created the Four Dam Power Pool Agency to operate the systems.

Eventually, KEA acquired the local Terror Lake unit from that group and assumed sole control of the local hydro operation.

Kodiak’s hydropower success led the KEA board to investigate other sources of clean, low-cost renewable energy. In 2007, the board adopted a bold vision statement proposing to generate 95 percent of the utility’s electricity from renewable sources by 2020.

"We were looking at the price of diesel, which was going up," Scott explained. "At the same time, you had the pollution issues. Wind looked like the most likely avenue to go, because hydro and wind have some good synergies.

"We have very strong winds," he noted. "When we were talking to General Electric about purchasing the wind turbines, their sales rep came down here and we took him up to the site. The wind was so strong that we had to stand basically at a 45-degree angle. We were really only out there for a minute or two before he said, ‘Yeah, I’m good.’"

In 2009, KEA installed three 1.5-MW wind turbines on Pillar Mountain, a 1,200-foot hill that rises up behind the city of Kodiak. Three years later, the company added another three turbines to its lineup, along with a 3-MW battery storage system.

To build those renewable projects, KEA was able to ride the wave of funding opportunities that were then available at the state and federal levels. The wind turbines and the backup battery system were funded through a series of grants from Alaska’s Renewable Energy Fund. That program is expected to be defunded by the Alaska Legislature this year as a result of the state’s fiscal crisis.

KEA estimates that power from the company’s Terror Lake station costs 6.8 cents per kilowatt-hour. Wind energy is a little more expensive at 11 cents per kWh. But the two renewable sources are significantly cheaper than diesel generation, which costs 28.9 cents per kWh, given an average cost of diesel fuel at $3.50 per gallon.

Scott said the company still maintains four diesel generators on "hot standby." But thus far, those units have been turned on only during maintenance work on the hydropower facility and every few months to make sure they’re still functioning.

In recent years, the Kodiak electric cooperative board has revised the company’s long-term vision statement. KEA now promises to use renewable sources of energy for at least 95 percent of the electricity it sells its customers for the foreseeable future.

That will require the company to find new sources of renewable energy to serve Kodiak’s expanding fish processing industry. The cooperative is already working on a plan to enlarge its hydroelectric system, which now has three turbines delivering power to its customers.

"Right now, we’re looking at diverting some nearby creeks through a tunnel" into Terror Lake, Scott explained. "That would add a lot more water and a lot more energy to the system." The company also plans to install a fourth hydroelectric turbine.

The project is designed to increase KEA’s hydroelectric output by roughly 25 percent, enough to handle anticipated growth on the island through the late 2020s. The company is now pulling together the permits for the expansion project and hopes to begin construction in 2018. Under that timeline, the new system could begin operations a year later.

Scott said he is frequently asked when the electric cooperative will add more wind turbines to its hillside fleet, which has become a symbol of Kodiak’s eco-friendly reputation. But he explains that despite Kodiak’s history of strong winds, energy from the turbines is not always reliable.

"If we went too much further with the wind, we’d have situations where the lights would go out because it’s just too variable at times," he said.

"We had an issue last November," Scott recalled. "We had hydro and wind running just like normal. And just over a couple of seconds, all the wind stopped. The wind went from 20 miles an hour to nothing in just a matter of two or three seconds."

But KEA’s system was equipped to handle the abrupt change.

"Everything came up. The flywheels fired, the batteries fired, the hydro started picking up over time, and everything worked perfectly," he explained. "And we stayed above our trip points. Because the next line of defense is that you start turning people’s power off to keep things stable. And obviously we don’t want to go there.

"We’ve never had to go there due to a wind incident so far," he said. "And we’d rather not have to do that."

After they enlarge the company’s workhorse hydropower system, they may consider more wind turbines. At the same time, Scott said he’s also watching promising technologies like wave and tidal power.

Kodiak has several promising wave and tidal power spots, he noted. "But neither one of those technologies has really been commercialized yet," he said. "So we’ll keep an eye on it."

By contrast, Scott doesn’t consider solar energy to be a viable option in stormy, foggy Kodiak, where rain or snow falls during more than half of the year.

"We’re a cooperative that’s owned by the folks up here," he noted. "Part of the community is very concerned about the environment. And then there are some folks that are equally concerned about the cost, because they’ve got businesses to run. Well, our costs now are cheaper than they were 15 years ago.

"So it’s kind of a win-win for both parties," he said. "The lights are more reliable than they were before. The cost is lower. And the environment is a whole lot better off."