Once-common bumblebee on ‘brink of extinction’ 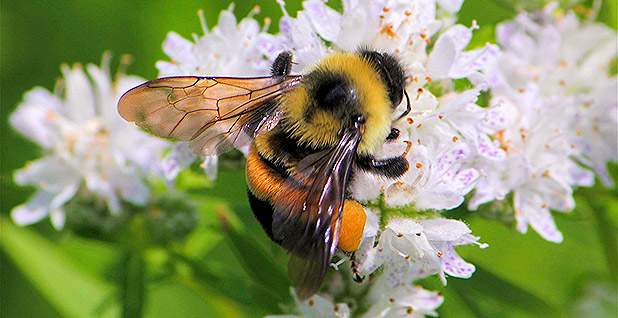 The Fish and Wildlife Service is listing the rusty patched bumblebee as an endangered species. Photo by Dan Mullen, courtesy of Flickr.

The Obama administration has determined that a bumblebee once found throughout the eastern United States and Upper Midwest is on the brink of extinction and needs federal protection to save it from a host of threats, including the use of pesticides and climate change.

The Fish and Wildlife Service today announced it is listing the rusty patched bumblebee as an endangered species, a move some representatives of the agriculture industry and other industries have warned could have dramatic economic impacts.

The final rule listing the bumblebee for protection under the Endangered Species Act will be published in tomorrow’s Federal Register, and will go into effect 30 days later, on Feb. 10.

Today’s designation marks the first time any species of bee in the continental United States has been listed as endangered under ESA, according to the service. FWS in September listed seven species of yellow-faced bees as endangered, but they are found only in Hawaii.

The rusty patched bumblebee — which until the late 1990s was commonly found in 28 states and two Canadian provinces, from Connecticut to South Carolina, and as far west as North Dakota — has been on a steady decline since at least 2000.

Populations of the bumblebee, a critical pollinator of prairie wildflowers and many agricultural crops, have plummeted by 88 percent in the last two decades, and it is now only found scattered across 13 states and one province, according to the FWS listing decision.

The situation is so dire that the service said today the rusty patched bumblebee is "balancing precariously on the brink of extinction," and that without immediate action, the bees could soon be wiped out across "all or a portion of their range."

"Our top priority is to act quickly to prevent extinction of the rusty patched bumblebee," FWS Midwest Regional Director Tom Melius said in a statement. "Listing the bee as endangered will help us mobilize partners and focus resources on finding ways right now to stop the decline."

The Xerces Society for Invertebrate Conservation, which along with the Natural Resources Defense Council filed a lawsuit in 2014 challenging FWS’s failure to act, first petitioned for ESA listing of the rusty patched bumblebee in 2013.

"Today’s Endangered Species listing is the best — and probably last — hope for the recovery of the rusty patched bumblebee," Riley said in a statement. "Bumblebees are dying off, vanishing from our farms, gardens, and parks, where they were once found in great numbers."

But the decision is certain to concern a number of industries that could be affected by it.

Parker Moore, the head of the endangered species practice at the law firm Beveridge & Diamond, warned more than a year ago that because the wild bee’s habitat is generally open spaces, a listing decision would affect "virtually all industries rangewide," including the agriculture, energy, timber, and commercial and residential development industries (Greenwire, Sept. 18, 2015).

Moore cautioned that FWS’s status review of the bee "should be closely monitored by stakeholders" of the various industries. "That said, it is difficult to imagine any industry that a listing decision for this species would not affect," he said.

But the loss of the bees would also cause significant economic damage.

The rusty patched bumblebee pollinates many plants, including economically important crops such as tomatoes, cranberries and peppers.

Bumblebees are especially good pollinators; even plants that can self-pollinate produce more and bigger fruit when pollinated by bumblebees, according to FWS. Each year, insects, mostly bees, provide pollination services valued at an estimated $3 billion nationwide, the service said.

FWS completed what it called a "comprehensive assessment" of the biological status of the rusty patched bumblebee, confirming that since the late 1990s bumblebee "abundance and distribution has declined significantly," according to an advance notice in today’s Federal Register.

At sites where once healthy populations of bees were observed, researchers found "only a few individuals; 95 percent of the populations are documented by 5 or fewer individuals; the maximum number found at any site was 30," the service said in the notice.

"The number of individuals constituting a healthy colony is typically several hundred, and a healthy population typically contains tens to hundreds of colonies," the notice says.

Declining populations are part of a growing trend among pollinators of various species, Melius said.

"The rusty patched bumblebee is among a group of pollinators — including the monarch butterfly — experiencing serious declines across the country," he said.

"Why is this important? Pollinators are small but mighty parts of the natural mechanism that sustains us and our world," he added. "Without them, our forests, parks, meadows and shrublands, and the abundant, vibrant life they support, cannot survive, and our crops require laborious, costly pollination by hand."