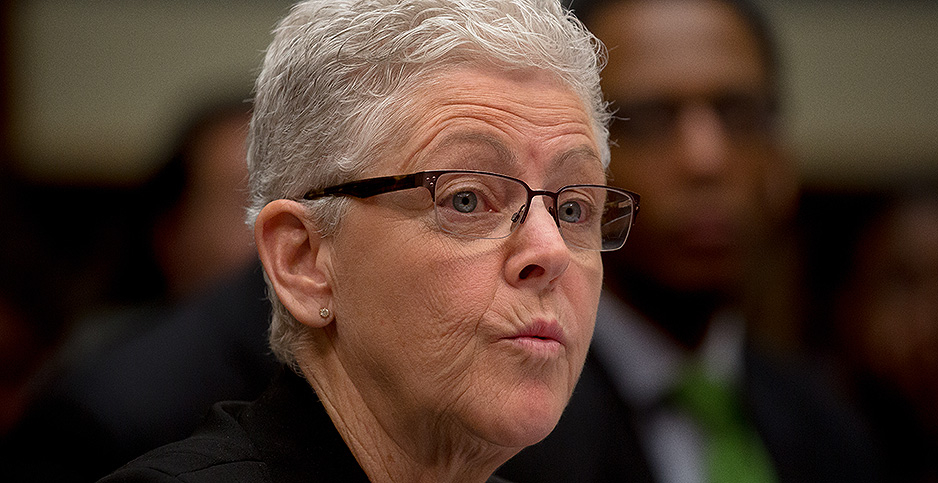 Former EPA Administrator Gina McCarthy seems to be following the 2020 presidential race — enough so to grab her checkbook.

McCarthy also contributed $250 to former South Bend, Ind., Mayor Pete Buttigieg, who is running in the 2020 Democratic presidential primary against Warren and others, earlier that same month.

At the time of her contributions, McCarthy was working at Harvard University as a public health professor, leading its climate change center. But she is now the president and CEO of the Natural Resources Defense Council as well as the head of the prominent environmental group’s political arm, the NRDC Action Fund.

The NRDC Action Fund plans to play big in this year’s presidential campaign. Its endorsement is especially prized by Democratic candidates looking to demonstrate their green bona fides.

A spokesman for the group said McCarthy’s past support for Warren and Buttigieg wouldn’t be a factor in its decisionmaking.

"We understand many of our colleagues may contribute to candidates of their choosing," said an NRDC Action Fund spokesman.

"The action fund does not research staff’s political contributions, nor inquire about or discuss them amongst colleagues; those private contributions therefore play no role in whether and/or whom the action fund chooses to endorse."

In the NRDC’s Washington office last week, McCarthy spoke to reporters about presidential politics but declined to discuss specific candidates. She did say she was impressed by the Democrats’ ambition to tackle climate change.

"If you look at the entire slate of Democrats, they’re all talking and outdoing one another with climate plans. I find that incredibly exciting," McCarthy said (Greenwire, Jan. 17).

Lisa Jackson, who was head of EPA during Obama’s first term, donated to several presidential candidates in 2019.

Spread out over several contributions, she also gave $2,500 to Sen. Cory Booker’s (D-N.J.) and $2,800 to Sen. Kamala Harris’ (D-Calif.) presidential campaigns, as well. Both Booker and Harris have since dropped out of the race.

Fellow Obama administration alumni have contributed to Biden, too. Former Interior Secretary Sally Jewell gave $1,000 to the former vice president in April last year. She was at the University of Washington at the time and is now interim CEO for the Nature Conservancy.

Ken Salazar, her predecessor at Interior and a former Colorado senator, made contributions to Biden as well as Sen. Michael Bennet’s (D-Colo.) and ex-Colorado Gov. John Hickenlooper’s presidential campaigns. Hickenlooper has since exited the race.

William Reilly, who served as EPA administrator under President George H.W. Bush, gave $1,000 to Sen. Ed Markey (D-Mass.), who has a difficult primary challenge from Rep. Joe Kennedy on his hands.

"Essentially my point with respect to Markey is that he is the most consistent and articulate exponent of climate policy in the Congress. He knows the subject. He has constantly been an avatar of promotion for intelligent climate policy, and I think he has earned our support," Reilly said in a voicemail.

Reilly has supported Democrats in the past. Along with the late William Ruckelshaus, who was EPA’s first administrator under President Nixon and then again under President Reagan, he endorsed Hillary Clinton in the 2016 presidential race.

At the time, Reilly said he was pitched on backing the Democratic candidate by another former EPA chief, Carol Browner, who led the agency during the Clinton administration (Greenwire, Aug. 9, 2016).

Mike Leavitt, the former Utah governor who was EPA administrator from 2003 to 2005 during the George W. Bush administration, contributed last year to Sen. Ben Sasse (R-Neb.), who is running for reelection in 2020. He also contributed to Bill Hagerty, the ex-U.S. ambassador to Japan running for a Senate seat in Tennessee.

"[Gov. Leavitt] simply would add that they are both good friends that he admires, so he contributed to their campaigns," Heidi Furness with Leavitt Partners, Leavitt’s consulting firm, told E&E News.

FEC records also show Christine Todd Whitman, the former governor of New Jersey who led EPA before Leavitt, donated $1,500 in 2019 to New Jersey Senate Minority Leader Tom Kean Jr. (R), who is running for Congress, and $1,500 to Sen. Susan Collins (R-Maine), who has a tough reelection race this year.

Reilly also said he could see himself helping Collins, as well. "I have a lot of respect and admiration for her. I think she’s in a tough race, and I hope the Republican Party continues to have the advantage of her astute seriousness and moderation," he said.