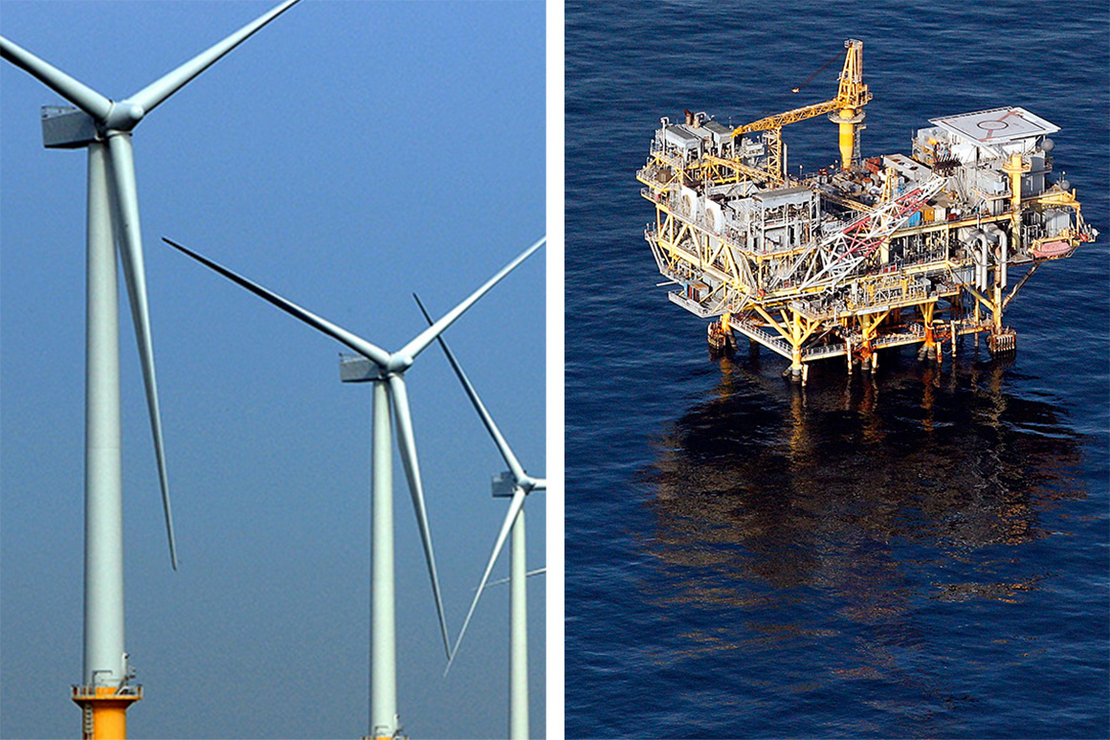 Elizabeth Klein is taking over as the director of the Bureau of Ocean Energy Management, which oversees the rollout of offshore wind and the leasing of oil and gas development off the nation’s coasts. Christopher Furlong/Getty Images (Turbines); Chris Graythen/Getty Images (Rig)

The Biden administration will replace its top offshore energy chief with an Interior Department aide who the White House almost two years ago pulled from consideration for a top leadership position to appease senators worried about her stance on fossil fuels.

Elizabeth Klein succeeds Amanda Lefton as director of the Bureau of Ocean Energy Management, who will step down Jan. 19.

She will oversee a bureau speeding toward the largest offshore wind expansion in U.S. history and in the middle of making key decisions on the future of offshore oil and gas drilling.

“The Interior Department is leading the effort to foster a clean energy future, and Liz will be critical to our efforts to meet the President’s ambitious goals to deploy affordable clean energy to power homes across America and create good-paying jobs in the growing offshore wind industry,” said Rachael Taylor, the chief of staff for Interior Secretary Deb Haaland.

Klein, a veteran of the Clinton and Obama Interior departments, was deputy director of the NYU School of Law’s State Energy and Environmental Impact Center before joining the Biden administration. Most recently, she has been serving as an adviser to Haaland focused on water policy.

Shortly after President Joe Biden took office, Klein was nominated to serve as deputy secretary at Interior, a second-in-command position with extensive responsibility over the department’s energy policies. But under pressure from Sens. Lisa Murkowski (R-Alaska) and Joe Manchin (D-W.Va.), the White House yanked her nomination in March 2021 (E&E Daily, March 24, 2021).

The pro-oil lawmakers had viewed Klein as a threat to the federal oil and gas program due to her views on climate change and the energy transition, although her supporters maintained that Klein’s politics were being exaggerated on Capitol Hill.

The deputy secretary role instead went to Tommy Beaudreau, a former BOEM director during the Obama administration who was fairly swiftly confirmed.

Klein inherits a bureau that has sought to rapidly ramp up the offshore wind industry and rein in offshore oil and gas leasing.

Lefton doubled staff at the bureau’s offshore renewables office, greenlighted the first two offshore wind farms in the country, and carried out a spate of offshore wind auctions in the Atlantic and Pacific oceans.

“BOEM is at the epicenter of the Department’s work to create good-paying union jobs in the offshore energy sector, support a reliable domestic supply chain, and meet the moment for a clean energy economy,” said Taylor. “Amanda has been a driving force of this effort, and we are grateful for her vision, commitment, and service to this country.”

Her exit prompted well wishes from offshore wind proponents and industry officials, who credit her with the speed and scale of offshore wind priorities met during the last two years.

Josh Kaplowitz, vice president for offshore wind at the American Clean Power Association, said she had laid a foundation that will help the country reach the 30-gigawatts-by-2030 goal Biden has targeted.

David Hardy, CEO of Ørsted in the Americas, wished Lefton the “best of luck” and thanked her for her service.

Correction: In the original version of this story, a comment was incorrectly attributed to the American Clean Power Association. It has been removed.