One of these 5 officials could be Biden’s FEMA chief 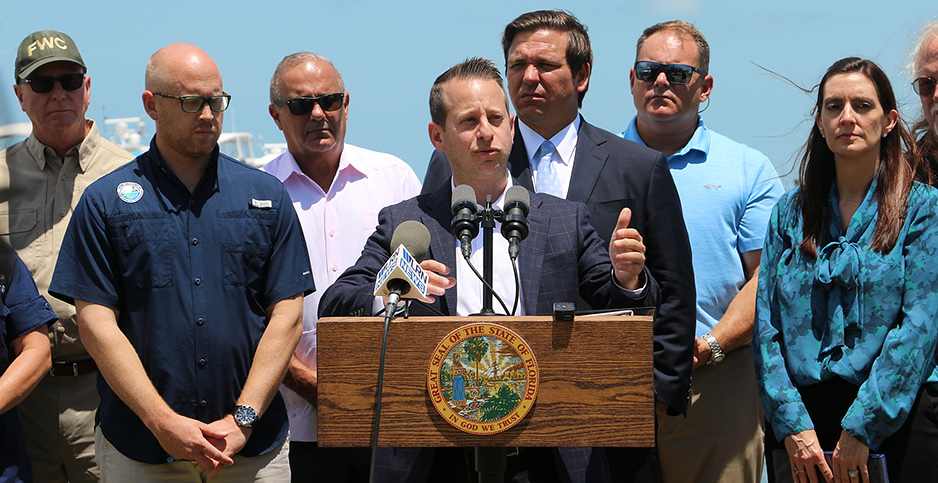 The names of five prominent emergency management officials are circulating as possible candidates to run the Federal Emergency Management Agency in the incoming Biden administration, which is facing pressure to fill the slot quickly.

Sources close to FEMA tell E&E News that the five officials include Deanne Criswell, commissioner of the New York City Emergency Management Department, and James Featherstone, a longtime emergency management leader in Los Angeles. Criswell, who has held senior positions at FEMA, would be the first woman to lead the agency since its creation in 1979. Featherstone would be the first Black FEMA administrator since the late 1980s.

The Biden administration has vowed to create a diverse Cabinet, and FEMA is under pressure to address diversity issues following a recent internal report that found widespread racial and sexual harassment and discrimination in the agency.

Ghilarducci worked closely this year with Vice President-elect Kamala Harris, a Democratic senator from California, on the state’s record-setting wildfires and has been outspoken in linking the wildfires to climate change.

"All of them are qualified, and they all have the experience necessary to do the job," a former senior FEMA official said.

The International Association of Emergency Managers, which represents local emergency agencies, has urged the Biden administration to fill the job quickly instead of waiting months after inauguration as previous incoming administrations have done. FEMA’s current administrator, Peter Gaynor, will leave office with the Trump administration.

"Changing administrators in the middle of the greatest catastrophe to hit our country at least since World War II is a daunting thought," association President Judson Freed said in an interview. "The sooner we can know who we’re going to be working with so we’re not waiting until late spring or summer, the better."

Moskowitz has acknowledged his interest in the FEMA job, telling a Florida news outlet in November that "if the call came, I would answer the phone."

Sprayberry told E&E News in a statement that he is focusing on North Carolina’s pandemic response and added, "I will say it would be an honor to be considered for a position within the Biden administration."

Criswell said in a statement that she is "committed to leading the NYC Emergency Management Department during these unprecedented times" and is "focused on serving the people of New York City."

Ghilarducci’s office did not respond to a request for comment, and Featherstone could not be reached.

Here is a look at the possible candidates.

Criswell was named head of New York City’s Emergency Management Department in June 2019 by Mayor Bill de Blasio, a Democrat, who hired her from the Cadmus Group consulting firm.

Criswell worked at FEMA from 2011 to 2017 and led one of the agency teams that handle disaster response and recovery. Before joining FEMA, she was emergency manager in Aurora, Colo., a city of nearly 400,000 people near Denver.

In New York City, Criswell has warned about climate change triggering flooding in the city.

"Sea rise is definitely a concern, and sea levels in New York City right now have risen about a foot since 1900," Criswell told the "Disaster Zone" podcast in October. "Our current climate change projections show they could rise another 30 inches by 2050. This is a big concern for us."

"What we’re seeing is high sea levels are causing flooding on what you would consider a sunny day," Criswell told podcast host Eric Holdeman.

In November 2019, Criswell told a security conference that "climate change, social and economic inequity, aging infrastructure, reliance on technology, cyber threats and domestic terrorism" are exacerbating disasters, according to the Brooklyn Daily Eagle.

"She would check a lot of the boxes. She’s been a local emergency manager, worked for FEMA, been on the front lines of COVID activity, is well-respected by her peers. And she’s a woman," a former FEMA senior official said.

Featherstone spent 30 years working in public safety in Los Angeles, starting in the city’s fire department in 1986 and working his way up to become general manager of the city’s Emergency Management Department. Retiring in 2016, he became CEO of the Los Angeles Homeland Security Advisory Council, where he worked with the public and private sectors to modernize emergency preparedness, until August.

As interim fire chief in Los Angeles in 2013-14, Featherstone ran an agency that had faced allegations of discrimination against minorities and had paid millions of dollars to settle discrimination lawsuits.

"I’m certainly sensitive to diversity," Featherstone said in a 2014 interview with the Los Angeles Times. "Have I experienced discrimination? Absolutely."

Featherstone recently was chairman of a National Academies of Sciences, Engineering and Medicine committee that published a report in January on strengthening supply chains to withstand major disasters. The committee’s report, written for FEMA, found that an influx of emergency supplies after a major disaster can have the unintended consequence of delaying an area’s recovery and should be scaled back.

"The most effective way to deliver the needed supplies to a disaster-impacted area is by re-establishing pre-disaster supply chains," according to the report, which FEMA requested after experiencing supply problems during the devastating 2017 hurricane season.

Featherstone has served as a senior fellow at Harvard University’s Kennedy School of Government and was an adjunct instructor at Texas A&M’s National Emergency Response and Recovery Training Center.

Ghilarducci has been a senior official in California emergency management since 2000 and previously was a federal coordinating officer at FEMA in the Clinton administration.

In recent years, as California has faced some of the largest and most destructive wildfires in state history, Ghilarducci has been outspoken about climate change and a frequent witness at hearings in Congress.

In June 2019, Ghilarducci told the House Oversight and Reform Committee, "California has been severely impacted by the effects of climate change, which have manifested in the form of tree mortality, floods, severe storms, debris flows and multiple major wildfires."

In an August 2019 hearing before the same committee, Ghilarducci called climate change "a force multiplier when it comes to wildfires and their destruction" and said the wildfire burn area in California would increase 77% by 2100.

Ghilarducci had "frequent discussions" with Vice President-elect Harris in recent months about how to protect California residents from wildfires and COVID-19, according to a statement from Harris’ Senate office in September.

At the August 2019 hearing, Ghilarducci questioned a new FEMA policy that made it harder for disaster survivors in large states such as California to get emergency aid from FEMA.

Moskowitz has the least experience in emergency management of the five possible FEMA candidates. He’s been in charge of Florida’s Division of Emergency Management since January 2019, when newly elected Florida Gov. Ron DeSantis named him to the position.

The appointment got attention in Florida because DeSantis is a Republican and Moskowitz is a Democrat who at the time of his appointment represented Broward County in the Florida House of Representatives, a part-time job. He worked on Barack Obama’s presidential campaign in 2008. Moskowitz’s full-time job was general counsel at AshBritt Environmental, a Florida company with contracts to clean up hurricane debris.

When he appointed Moskowitz, DeSantis called him a "high octane incumbent" and "an effective Democratic voice in the Republican-dominated Legislature," according to the South Florida Sun Sentinel.

"We have a rich history of Democrats and Republicans coming together in emergency management," Moskowitz told the Sun Sentinel in June. "When a hurricane hits, it doesn’t pick a Republican house or a Democratic house. This pandemic doesn’t pick whether you watch Fox or MSNBC in how it affects you."

Moskowitz was aggressive in the spring at lining up hotels to accommodate hurricane evacuees so they would not have to stay in traditional "congregate" shelters, where the coronavirus might be easily spread.

One emergency management senior official told E&E News that Moskowitz’s candidacy for the FEMA job could be hurt by his association with DeSantis, a strong Trump supporter who was aggressive about keeping Florida schools and businesses open during the pandemic.

Sprayberry has run the North Carolina Division of Emergency Management since 2013, when he was appointed by then-Gov. Pat McCrory, a Republican, after working in the state agency for eight years. Sprayberry has continued to serve under North Carolina’s incumbent governor, Democrat Roy Cooper.

Sprayberry is well-regarded by other emergency mangers for his experience and calm demeanor during disasters.

"He is a top-notch emergency manager. He never overreacts to bad news and … takes ownership of the job that he’s been appointed to do," former FEMA Administrator Brock Long told The Charlotte Observer in May. "I’ve always found Mike Sprayberry to be a humble diplomat by nature."

The Raleigh News & Observer wrote in May that Sprayberry "fits a familiar trope, the uncle who knows where the good barbecue is on the way to the beach — and has very strong opinions about it — but also the one who answers the phone immediately and shows up first to help when your car gets stuck in the mud."

"He’s nonpolitical and doesn’t really give a damn whether Republicans or Democrats are in power," Mark Goodman, a local emergency manager, told the Raleigh newspaper. "He does what is best for the people of North Carolina. That’s the key. It’s hard to find people like that."

Sprayberry is a member of FEMA’s National Advisory Council and was president of the National Emergency Management Association in 2017-18.

Sprayberry last year voiced opposition to FEMA’s plans, which were then under consideration, to slash disaster aid and make it harder to states to qualify for disaster aid. FEMA formally proposed the idea on Monday.

"I wouldn’t support it because what that does is put the onus back on the states" for disaster recovery, Sprayberry told E&E News in October 2019.