One thing that will breach Trump’s wall: climate change 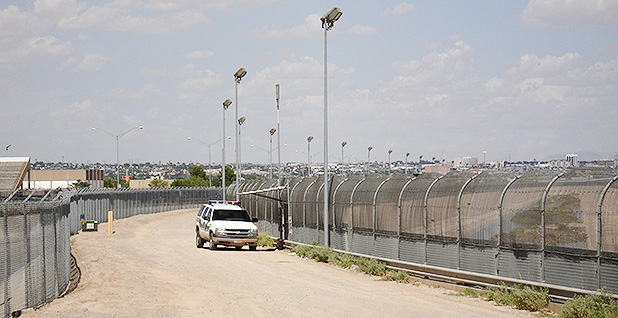 A fence along the U.S.-Mexico border near San Diego. Activists and architects say a wall will cause serious environmental damage. Photo courtesy of Wikipedia.

Architects have called the border wall a "pharaonic project" and a misplaced infrastructure priority. Environmentalists say it will continue to cut off the flow of water and wildlife in a changing climate but is little more than political grandstanding that won’t keep out people.

And climate activists say that President Trump’s border wall with Mexico and other efforts to keep people out represent a backward effort to stem a tide of migration that would be better addressed at its source: in places where climate impacts are already happening.

Trump, though, had one response yesterday, as he announced an executive order that fulfills his campaign promise to build a border wall: "Beginning today, the United States of America gets back control of its borders, gets back its borders."

Environmental activists say there’s already plenty of evidence that a border wall, beyond the existing fencing that runs along large portions of the border, would be an expensive and potentially damaging climate mistake.

"In terms of climate adaptation, building a border wall is an act of self-sabotage," said Dan Millis, a program manager with the Sierra Club’s Borderlands project. "And the reason I say that is we’re already seeing wildlife migrations blocked with the current walls and fences that have already been built. We have hundreds of miles of these walls that were built without dozens of environmental protections."

The climate impacts of a massive concrete wall running from San Diego to Brownsville, Texas, along the border of the United States and Mexico begin with the source of the materials, Millis said. The production of cement, the material that holds together concrete, is a major source of greenhouse gas emissions.

Billions of dollars already have been spent on existing border fencing, with little to no environmental oversight, Kierán Suckling, executive director of the Center for Biological Diversity, said in a statement. That has led to erosion and flooding in border communities as well as a roadblock for the natural movement of wildlife across the border. Environmental groups say that migration corridors are crucial for the recovery and survival of wildlife along the border. They’ve spotted wolves, ocelots and even jaguars along the border walls.

"Like many of Trump’s ideas, this one has nothing to do with reality," Suckling said. "There is no reason to sacrifice the health of border communities and wildlife for such political grandstanding."

Architects backed into an ethical corner

Already, it’s clear that by making the wall one of his first week priorities, there are signs the Trump administration will take aggressive action to begin construction. Congress previously acted to speed construction along the border by passing a 1996 law that allowed the federal government to build a fence in San Diego (E&E News PM, Jan. 25).

Trump also this week signed an executive order to the Council on Environmental Quality to identify "high priority" infrastructure projects and find ways to speed them (Climatewire, Jan. 25).

Architects and engineers struggled with the ethics of the wall’s construction throughout the campaign. In the days following Trump’s election, architects erupted in dissent over a statement from Robert Ivy, the executive vice president and CEO of the American Institute of Architects, who issued a statement saying the organization’s members were committed to working with the president-elect on crafting a spending plan to strengthen the nation’s aging infrastructure (Climatewire, Nov. 21, 2016).

Some local AIA chapters disavowed Ivy’s statement, singling out in particular their concerns about Trump’s position on climate change. Ivy retreated from his original statement and, in a video apology, called it a "tone-deaf" one that failed to reflect AIA’s larger values. The organization had no comment today, but its spokesman did say that most architects see the wall as more of an engineering feat than a design matter.

Now, they’ll have to decide whether they should take a stand, said Raphael Sperry, president of the San Francisco-based Architects, Designers and Planners for Social Responsibility.

Architects and engineers are required to protect public health, safety and welfare as an ethical priority in their work, Sperry said.

Knowing the weakness of walls

After Trump’s announcement, many climate activists said that the new president has it backward: Stemming the flow of refugees and immigrants starts by addressing climate change.

"If President Trump was as concerned about our nation’s true national security issues, he would be tackling climate change head-on while safeguarding refugees and immigrants from the worst impacts of a warming planet and ongoing turbulence in their homelands," Gene Karpinski, president of the League of Conservation Voters, said in a statement.

New Orleans has a nuanced understanding of what it means to build a wall, said Bryan Lee Jr., the place and civic design director for the Arts Council of New Orleans, who has written about equity issues in the built environment.

A border wall "is not going to stop the flow" of people, he added. "It just means they’re going to find different ways."

In New Orleans, walls are thought of as protection, which has done some good, he said. But they also have not stopped anything, he said, especially the slow creep of water as land subsides and as seas rise.

"It is meant as a stopgap, that is what those things do," he said. "If you’re not talking about the root cause, you’re never going to solve it."