‘Oops’ question one of many likely to dog Perry’s confirmation 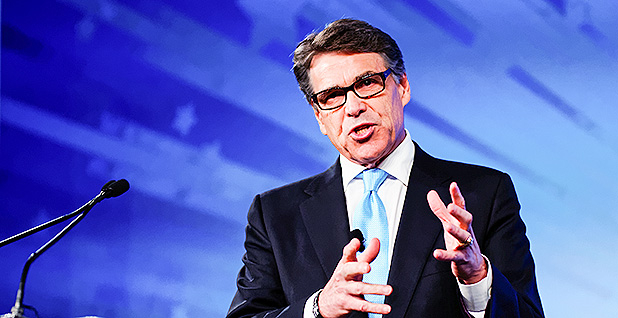 Does former Texas Gov. Rick Perry (R) still want to dismantle the Department of Energy, the sprawling federal entity he’s slated to lead if confirmed by the Senate?

Will he condemn a memo that President-elect Donald Trump’s advisers were circulating in recent weeks, seeking out DOE employees who attended climate-related meetings?

What are the former governor’s intentions for the nation’s sprawling laboratories, or loan authority and efficiency measures that underpinned the Obama administration’s push for clean energy?

These are only a handful of pressing questions on tap for Perry’s confirmation hearing before the Senate Energy and Natural Resources Committee this Thursday.

While the bulk of the panel’s 12 Republicans have signaled support for Perry, who failed to win the White House in the past two presidential elections, a number of the committee’s 10 Democrats have questions about worker protection and Perry’s qualifications to oversee the nation’s nuclear arsenal and the world’s largest environmental cleanup program.

At least one Democrat on the panel, Sen. Martin Heinrich of New Mexico, has called Perry, a politician with military but no scientific experience, "utterly unqualified" for the post.

Other Democrats have voiced cautious optimism as Perry creeps toward confirmation.

The energy panel’s top Democrat, Sen. Maria Cantwell of Washington, who was incensed over the transition memo seeking out the names of DOE employees, is likely to seek reassurances that Perry will protect DOE scientists and follow through with the massive Hanford cleanup project in her state.

The Obama administration, in response to the memo, released a revised policy for the agency that prevents scientists from censorship, protects their freedom of expression, establishes a scientific integrity official for the agency and expands whistleblower protections (E&E News PM, Jan. 11).

Cantwell during an interview Friday said she’s also keen on hearing his intentions for grid modernization and energy innovation. "There are some policies that we think are challenging for the future," Cantwell said. "We really want to make sure he’s going to continue the investment in the innovation economy, in energy innovation."

While Perry has been flustered by embarrassing anecdotes, poor college grades and even legal questions that were since cleared up, at least one Democrat on the Senate committee has joined his Republican colleagues in voicing confidence about Perry’s ability to successfully oversee DOE’s broad portfolio (E&E Daily, Jan. 5).

Republicans are eager for Perry to bolster fossil research, expedite approval of domestic gas exports, and pull back on renewable research and investment.

"If you run a state the size of Texas," Sen. Joe Manchin (D-W.Va.) told E&E News during a recent interview, "he has all the ability I think to do the job."

Whether senators will dig into looming financial questions tied to Perry’s past, as well as his "oops" remark at a Republican presidential debate in 2011, remains to be seen.

While Perry in recent weeks has vowed to cut his own ties to energy companies like the developer of the contentious Dakota Access pipeline, a number of Texas watchdogs have raised concerns about Perry’s signature jobs programs and questions about accounting and poor management (Climatewire, Jan. 17).

At least one of those watchdogs has reached out to senators on the Energy and Natural Resources Committee, but wouldn’t say which lawmakers were contacted.

Senators at the hearing may also throw jabs at Perry for his now infamous DOE "oops" moment during a presidential debate in Detroit in the summer of 2011, in which he said he wanted to eliminate three agencies, including DOE — except that he couldn’t remember the department’s name at the time.

"I know the press and some of the governor’s opponents have been fixated on both the policy and the ‘oops’ moment from 2011, but I would argue that both of those are dated and largely irrelevant in light of the new role an the new administration that will be setting the policy," said Ray Sullivan, a Texas-based political operative and Perry’s top former aide.

Sullivan said Perry’s call to dismantle DOE was part of his 2012 presidential campaign, one that no longer fully applies to his nomination to lead the agency.

"In 2012, he was campaigning to be president and set forth his ideas for shrinking the size and scope of the government and reining in the economy," Sullivan said. "In 2017, he will be serving the new president and promoting and implementing the administration’s policies."

Sullivan, for his part, vividly remembers the summer of 2011 when Perry made the very public mistake. Perry, he said, had just had back surgery, which affected his exercise and sleep, and those were compounded by the stress and strain of the presidential election.

Eliminating DOE was a policy initiative Perry laid out as part of a reform package in 2011, Sullivan said, but he didn’t recall the issue being discussed as part of Perry’s 2016 platform.

If confirmed, Sullivan said Perry will likely focus on jobs and inclusiveness of all energy types but said he didn’t know what specific policy items would be pursued.

"As a leader, Perry is famously conservative but hasn’t always been rigid or even predictable," he said. "In the energy space, he was famously ‘all of the above,’ Texas being the largest producer of oil, gas and electricity, and during his tenure, the state led in wind energy."