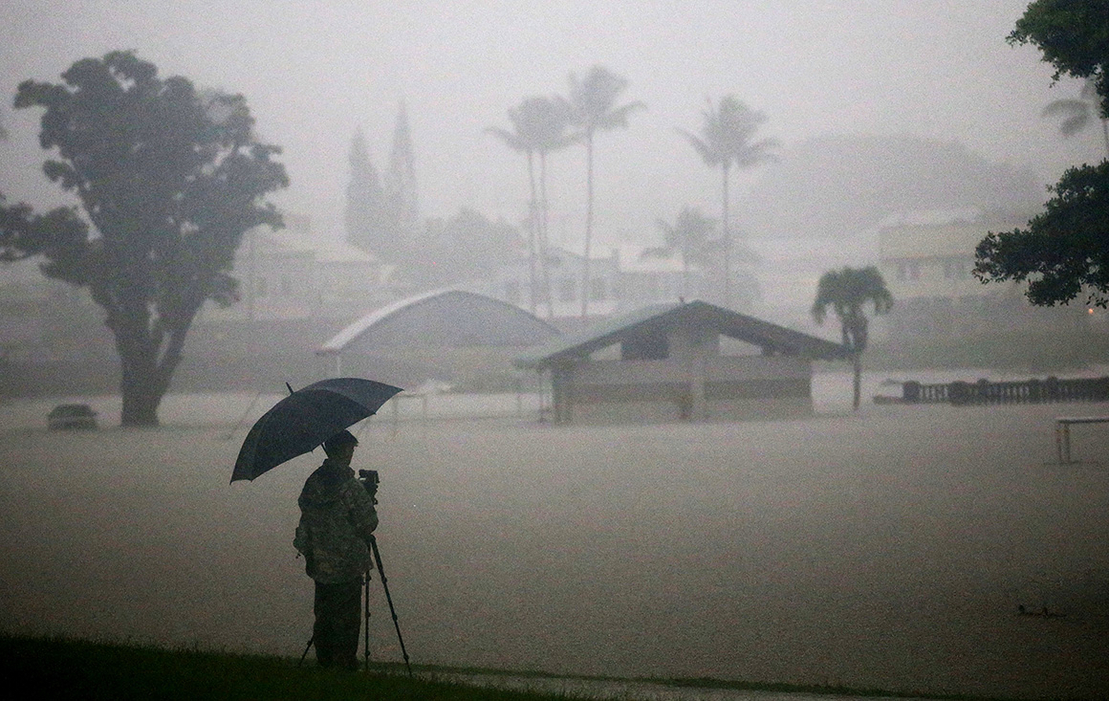 A man takes photos of floodwaters from Hurricane Lane in Hilo, Hawaii, in 2018. Mario Tama/Getty Images

A landmark federal court ruling that rejected efforts to force three opioid distributors to pay up for the addiction crisis is already being cited by oil and gas companies in at least one lawsuit from local governments seeking compensation for erosion, wildfires and other effects of a warming planet.

“A public nuisance [claim] based on the sale and distribution of a product has been rejected by most courts because the common law of public nuisance is an inept vehicle for addressing such conduct,” oil industry attorneys wrote, quoting the decision in the opioid case City of Huntington v. AmerisourceBergen Drug Corp.

The attorneys argued that extending nuisance laws “to cover the marketing and sale of petroleum products is inconsistent with the history and traditional notions of nuisance.”

Maui’s lawsuit is among nearly two dozen climate liability cases filed by local governments that want fossil fuel companies to help shoulder the cost of dealing with the effects of climate change, such as sea-level rise and flooding. Maui filed its lawsuit two years ago against 20 oil companies, citing a decadeslong campaign of deception.

In the opioid litigation, more than 3,000 state and local governments have targeted drug manufacturers and distributors since 2014. The cases — several of which have resulted in multimillion-dollar settlements — have been parsed by lawyers from both sides of the climate liability cases (Greenwire, Aug. 27, 2019).

But the recent ruling out of West Virginia has climate litigants adjusting their arguments.

In the case, the city of Huntington and Cabell County argued that AmerisourceBergen, Cardinal Health Inc. and McKesson Corp. created a public nuisance by shipping millions of opioid pills to West Virginia. The local governments asked for more than $2.5 billion to reduce the drug flow and to pay for misuse and addiction treatment.

But Senior Judge David Faber of the U.S. District Court for the Southern District of West Virginia in a 184-page decision, wrote that most courts have rejected claims of public nuisance involving “the sale and distribution of a product.”

Faber, a George H.W. Bush appointee, said West Virginia’s Supreme Court of Appeals has only applied nuisance law in cases involving “conduct that interferes with public property or resources” and that the state’s high court would likely decline to extend the law.

The oil and gas industry, which has embraced Faber’s decision, in the past has argued that there are major differences between the climate cases and the opioid litigation.

Chief among those differences, companies say, is that oil and gas has been a necessary element of U.S security.

Ted Boutrous, a partner at Gibson, Dunn & Crutcher LLP who represents Chevron Corp. in a number of the climate liability cases, including the challenge from Maui, made that point in May 2021 during oral arguments over Delaware Attorney General Kathy Jennings’ (D) lawsuit against 31 fossil fuel firms.

“This is not like an opioid case or an asbestos case,” Boutrous told a federal judge at the time. “This is a claim challenging the production of a product that has been essential to our national security.”

The West Virginia opioid decision, however, “adds to the continued jurisprudence that says public nuisance is not about how you market and make products,” said Phil Goldberg, special counsel for the Manufacturers’ Accountability Project, an initiative of the National Association of Manufacturers that opposes the climate liability litigation.

“There’d be no limitation to these types of lawsuits if that were to be the case,” he said.

But attorneys involved in climate litigation said the West Virginia opioid ruling doesn’t reduce their odds, noting that nuisance laws vary from state to state and that the decision came from a federal court.

Most of the cases against the oil and gas industry were filed in state courts and — like the opioid cases — rest on state-level laws like public nuisance and consumer fraud, with litigants arguing that climate change is a burden to local governments and that companies have contributed to the problem through misleading marketing. The cases have been embroiled in a jurisdictional battle for years, with industry attorneys urging judges to move the cases to the federal bench where oil and gas companies believe they have a better chance of success.

Local courts have upheld the lawsuits, and federal appeals courts have largely ruled in favor of state jurisdiction. The Supreme Court has sided with one of industry’s early jurisdictional arguments and may soon have the chance to weigh in again (Climatewire, June 9).

David Bookbinder, chief counsel at the Niskanen Center and a member of the legal team representing three Colorado governments in their climate liability case, noted that the municipalities in the West Virginia opioid case had won in two state courts before losing in federal court.

He said the climate cases are also focused on proving deception and showing that companies “produced and marketed fossil fuels knowing that they were going to cause global warming. … That’s a completely different situation than a bunch of distributor pharmacies.”

In the opioid ruling, Faber wrote that the West Virginia governments had “presented no evidence” that the drug distributors had made deceptive claims.

In a June filing opposing dismissal of the Maui climate case, county attorneys noted that courts across the country have approved similar nuisance claims brought against manufacturers for injuries “caused by the deceptive promotion of asbestos, cigarettes, chemicals, gasoline additives, guns, lead, opioids, and other harmful products.”

They argued that while the oil and gas industry contends that nuisance law does not cover injuries involving the sale of lawful products, courts have rejected those claims.

Industry lawyers in the Maui climate case are also arguing that the county is trying to hold the companies “liable for statements they made anywhere in the world, over the past many decades, that allegedly led to an increase in fossil fuel demand.”

But Boutrous, the Chevron attorney, said in a statement that Maui’s case does not meet Hawaii’s statute of limitations on lawsuits.

“The plaintiff concedes their complaint fails to identify a single alleged misrepresentation within the last 20 years, and certainly none within the two-year statute of limitations,” he said, adding that “federal courts across the country have consistently held that developing effective solutions to combat climate change is a matter of national and global importance that will require comprehensive policy solutions, not a patchwork of litigation.”