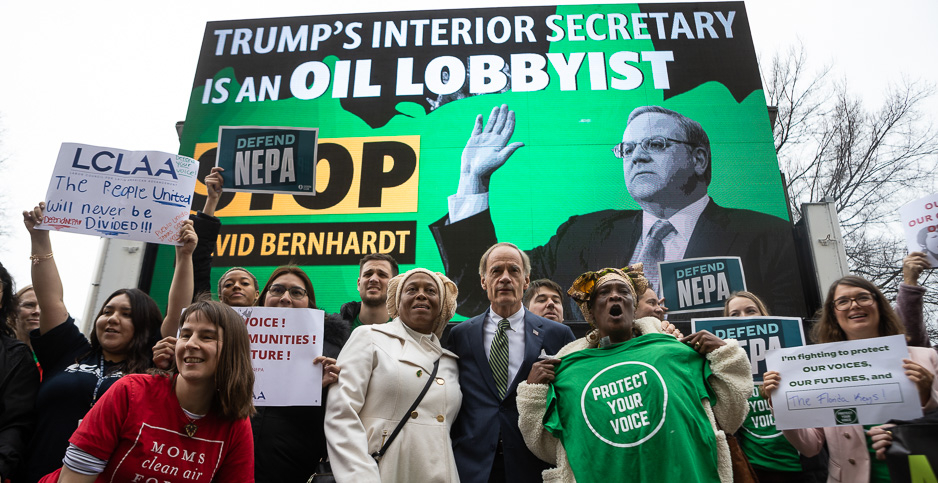 Opponents of the rulemaking — identifying as climate hawks, greens and Gullahs — used the Council on Environmental Quality public hearing to generate more opposition for the Trump rewrite.

Outside, a Jumbotron attacked Interior Secretary David Bernhardt as an oil and gas lobbyist and swamp monster living in President Trump’s executive branch.

A protest was planned in the park for this afternoon, and the angsty atmosphere at times felt almost party-like.

That said, a handful of representatives from the building and agriculture trades spoke in a low-key tone in favor of the White House plan to accelerate environmental review for large projects like highways, pipelines, transmission lines and bridges.

The public hearing on NEPA, set to last for most of the day, is the second and final on the administration’s proposal.

Under NEPA, communities can protest projects in their neighborhoods. And federal regulators are required to consider less environmentally harmful alternatives before issuing permits.

The Trump plans would "modernize" the process and apply time and page limits to environmental reviews. It would "clarify" definitions so the scope of review would be narrower for some projects (Greenwire, Jan. 9).

Proponents, like Brent Fewell, an advocate with conservative group ConservAmerica, say it would "significantly reduce delays and costs associated with federal decisions," but that real change would need to come from Congress.

At the hearing, Chad Whiteman, vice president for environmental and regulatory affairs at the U.S. Chamber of Commerce, noted that past administrations from both parties have sought to accelerate environmental reviews.

"The federal decisionmaking process was getting progressively longer," Whiteman said during the public hearing.

CEQ’s proposal would establish "presumptive" time and page limits for environmental reviews, observers note, which is different from "absolute" limits.

Some skeptics wonder if this proposal — if finalized — would in fact speed up environmental review if strict deadlines are not enforced.

Still, progressives remain vehemently opposed for a host of reasons, and named many of them this morning. The rewrite, they say, could limit climate considerations from NEPA review by eliminating "cumulative" or indirect impacts.

They said the proposal would give companies the authority to conduct their own environmental reviews. They see the changes as a handout to polluters.

"We know what is driving this," declared Christy Goldfuss, an Obama CEQ official now with the Center for American Progress. "The trade associations, [the Federal Energy Regulatory Commission] and others who want to lock in fossil fuel development."

At one point during her testimony, Goldfuss stared directly at the four CEQ staff members receiving comments and said "shame on you" for axing conflict-of-interest protections from environmental review.

Goldfuss was referring to a paragraph in the proposal that states "the lead agency, a contractor or applicant under the direction of the lead agency, or a cooperating agency, where appropriate … may prepare any environmental impact statement prepared pursuant to the requirements of NEPA."

She also complained that CEQ Chair Mary Neumayr stayed for only the very beginning of the hearing; Neumayr was spotted standing at the side of the auditorium later in the morning.

People made the trip to speak at the hearing from all over the country, including North Carolina, California, Michigan and Texas.

Hilton Kelley, executive director of the Community In-Power and Development Association, said environmental havoc is common in his Texas community of Port Arthur. He held up pictures of explosions at facilities where "millions of tons of toxic waste" spewed into the air.

"Right now, it is so regular, our kids have become complacent," he said. "They continue to play basketball."

Others talked about industrial stenches, environmental disasters and pollution in their neighborhoods. They said NEPA allows them to weigh in on decisions that affect their daily lives.

Sen. Tom Carper (D-Del.), ranking member on the Senate Environment and Public Works Committee, and Rep. Raúl Grijalva (D-Ariz.), chairman of the House Natural Resources Committee, slammed the proposal and said during a press conference that the rulemaking process was "rigged."

Carper stressed that NEPA review is not perfect but should be improved to increase climate considerations, not downplay them.

When asked if he thought oil and gas executives had played an undue role in crafting the NEPA regulation, Grijalva said time would tell. He has sought documents from the administration on that.