Opposing sides confident ahead of day in court 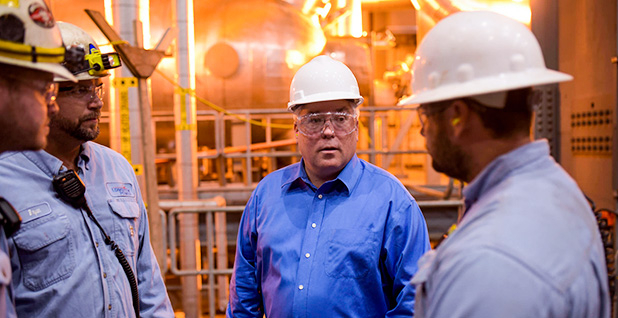 Speaking on a panel yesterday, West Virginia Attorney General Patrick Morrisey (R) said he is convinced his coalition of states will prevail in its massive challenge to the rule, which aims to cut carbon emissions from power plants. In fact, he said, his side might just win over the whole roster of judges at the U.S. Court of Appeals for the District of Columbia Circuit.

"We’re hopeful that our arguments are so compelling that they’re going to reach all 10 judges sitting on the panel," he said in a Texas Public Policy Foundation discussion hosted by Grover Norquist’s Americans for Tax Reform.

"They grossly misrepresent how the Plan works, and grossly exaggerate its impacts on the power sector," Natural Resources Defense Council attorney David Doniger wrote in a blog post Friday. "None of their legal arguments holds up."

Doniger and NRDC’s Lissa Lynch went on to assail their opponents’ various arguments, including the notion that the Clean Air Act bars pollution-cutting measures "beyond the fence line" of power plants.

"EPA determined that the combination of using of smokestack controls and pollution credits from shifting generation among plants makes up a well-demonstrated system of emission reduction, one that is widely used by the power industry both to meet internal targets and prior federal and state regulations," they wrote. "EPA decided that this familiar approach is the ‘best system of emission reduction’ for each carbon-emitting plant, and the agency then set emission rate limits that can be achieved at manifestly reasonable cost."

Constitutional lawyers fighting the Clean Power Plan took to The Wall Street Journal to make their case against the rule. In an op-ed, BakerHostetler attorneys David Rivkin Jr. and Andrew Grossman, who are representing Oklahoma against EPA, argued that the rule violates principles of federalism by commandeering states to fulfill federal goals. They rejected EPA’s argument that states are free to opt out of crafting a compliance plan and instead defer to a federal implementation plan.

"Whether or not the states choose to implement the plan directly, it leaves them no choice but to carry out the EPA’s federal climate policy," Rivkin and Grossman wrote. "That’s because the EPA can destroy but not create. It can regulate emissions of existing facilities, but it lacks the legal authority to facilitate the construction and integration of new power sources, which is ultimately the only way to achieve the plan’s aggressive targets."

Pulling no punches, they added: "The Clean Power Plan implicates every evil associated with unconstitutional commandeering."

Former EPA chief Christine Todd Whitman made counterarguments in her own opinion piece in Time magazine. The administrator, who served under George W. Bush, defended the rule, calling it legal, flexible and "in line with where the market is already going."

"First, the EPA’s authority to move forward with regulating carbon pollution under the Clean Air Act is not a matter of debate," she wrote. "EPA has authority, and it is in fact obligated to move forward."