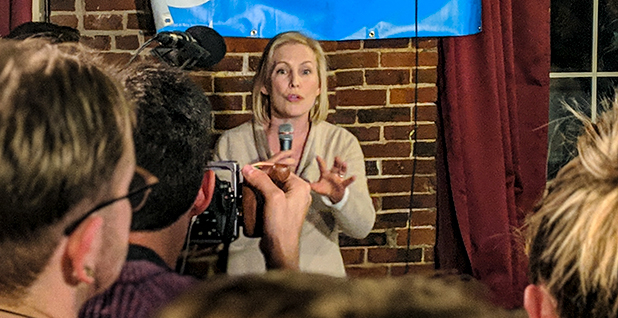 Democratic presidential candidates are mostly united in their opposition to the Yucca Mountain nuclear waste project, which faces significant resistance in Nevada, a key early caucus state next year.

Most of the nearly two dozen contenders in the race to take on President Trump have stated their intent to stop the long-delayed repository’s construction, have voted against it in past congressional votes or are silent on it.

In some cases, candidates had shown support for the project in the past. But since the Silver State has the fourth nominating event for Democrats, a big step toward the presidency that can set the tone for the rest of the primary season, support for Yucca is seen as a non-starter.

"Beto opposes funding or reopening the nuclear waste repository at Yucca Mountain, and he voted against restarting the licensing process for the facility while in the House of Representatives," said Chris Evans, spokesman for former Texas Rep. Beto O’Rourke, who voted against appropriations amendments in 2013 and 2014 to block funding for the project, but voted for a 2018 amendment that would have required Nevada leaders to consent to its construction.

"He has been consistent in his support for the state’s role and his views that we should not reopen the site, including while he was running statewide in Texas in 2018, where he took the political hit for directly opposing the majority of the state delegation, who supported restarting the licensing process at Yucca Mountain and allowing for additional transportation of radioactive waste," Evans said.

Washington Gov. Jay Inslee, whose state hosts the massive and highly contaminated Hanford Site, was a vocal supporter of Yucca when he was in the U.S. House and sponsored an amendment with Rep. John Shimkus (R-Ill.) in 2011 to force the planning process to proceed despite then-President Obama blocking it.

Now, Inslee isn’t so sure that’s the best idea.

"I think what the last few years have shown is that we need to find a more consensus-based approach on nuclear waste disposal. I do believe that," Inslee said at a House hearing last month in response to questioning from Shimkus.

"I think you’re going to have to have a conversation with Nevada, and I would not be overriding the decision of leaders in Nevada. And so I don’t see that in the future right now," he told reporters in March.

But opposition from Nevada, environmentalists, Obama and others has held it up. The state argues it had no say in Congress’ picking the site and that it does not want to deal with potential radioactive incidents or leakage.

Eric Herzik, a political science professor at the University of Nevada, Reno, said Yucca is very important to the Democratic electorate and could play a large role in the caucuses scheduled for Feb. 22, 2020.

"While the majority of Nevadans are opposed to Yucca Mountain, those who are most strongly opposed and who have led the fight are Democrats," Herzik said.

Herzik cited former President George W. Bush, a Republican, as an example of Yucca’s limited general-election sway. He refused to denounce the project during the 2000 campaign, and his administration declared it would seek to build Yucca in 2002, but he won the state both in 2000 and in 2004.

"It’s a good primary move, because they can all get on the same page and then move to the issues they really want to talk about," Herzik said.

In the 2020 race, Yucca is expected to play a bigger role than it has in the past. The Trump administration has taken steps to restart the project after Obama stopped it, including requesting $120 million each year for the Department of Energy to finish its formal application to build it and relaunching an office dedicated to it.

DOE also recently secretly shipped one-half metric ton of plutonium from South Carolina to Nevada — a move that was not directly related to Yucca but nonetheless angered state leaders, who believe the federal government views the state as a nuclear dumping ground.

One way Democratic candidates are showing their opposition to Yucca and alliance with Nevada Democrats is through Democratic Nevada Sen. Catherine Cortez-Masto’s "Nuclear Waste Informed Consent Act," which would let Nevada veto the project. Six senators running for president as Democrats — Sens. Bernie Sanders of Vermont, Elizabeth Warren of Massachusetts, Cory Booker of New Jersey, Amy Klobuchar of Minnesota, Kirsten Gillibrand of New York and Kamala Harris of California — are co-sponsors, the only co-sponsors apart from Sen. Jacky Rosen (D-Nev.).

"Any candidate hoping to win the support of Nevadans must be against Yucca Mountain," Cortez-Masto said in a statement about the co-sponsorships.

Gillibrand, who voted in favor of an unsuccessful 2007 House amendment to defund the project, expanded on her opposition at a Las Vegas campaign stop this week.

"I oppose it vehemently," she told reporters when asked about Yucca, according to the Associated Press. "I think it is so vital that communities and states get to decide if they want to house nuclear waste."

"Cory believes that Nevadans deserve to have a voice on whether toxic waste should be stored in their community," said spokeswoman Vanessa Valdivia.

Colorado Sen. Michael Bennet, another Democratic presidential hopeful, joined the race after those six signed on to the bill, but he has not co-sponsored it. His campaign did not return requests for comment on his position on Yucca.

California Rep. Eric Swalwell voted against the failed 2013, 2014 and 2018 legislative attempts to stop Yucca but now says he opposes it and nuclear energy as a whole.

"I support investments in the future of energy — wind, solar, fuel cells, and even one day, fusion. Until nuclear power can be safe and clean, I’ll oppose it," he said in a statement to E&E News.

"I will work as president to find an alternative to storing waste at Yucca Mountain. I don’t support solving this through a two-minute amendment vote in Congress. It requires leadership, and I’ll show that — for Nevadans, and for the future of energy."

Former Vice President Joe Biden, the race’s front-runner, has long been on record against Yucca. He voted against the 1987 law to mandate it and was vice president when Obama decided to halt it.

Former Secretary of Housing and Urban Development Julián Castro told The Nevada Independent last month that he wants to find a permanent repository for high-level nuclear waste, but it shouldn’t be Yucca Mountain.

But Andrew Yang, an entrepreneur who is running a long-shot president campaign with policies such as universal basic income, supports Yucca and wants to see the repository built, setting him apart from the rest of the field.

"It’s not a Nevada problem; it’s a United States problem," Yang, an outspoken supporter of nuclear power, told the Independent.

"And I would be very happy to put federal resources to work to clean up nuclear waste in part because nuclear power should be here to stay. It’s an ongoing problem, and we can’t have nuclear waste building up in places where states and cities are having a hard time making it safe."

Dan Schinhofen, a Republican, former commissioner in Nye County, Nev. — the home county to Yucca Mountain — and a longtime proponent of the project, said there’s no reason Democrats shouldn’t support it.

"This is a national security issue and should not be a political football," he said. "We need leaders that will stand up and support the science and the safety of the nation over political posturing.

"It is amazing to me that all of those candidates refuse to follow the rule of law."