Oracle buys Opower, and the role of energy data grows 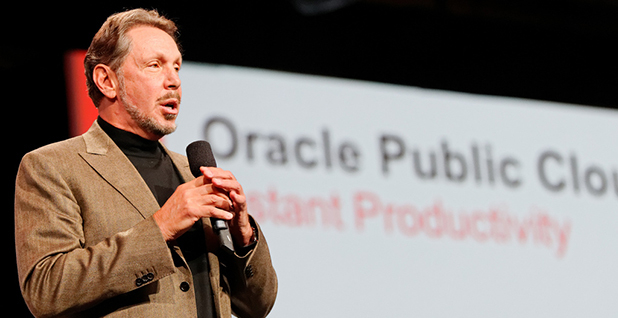 Larry Ellison, Oracle Corp.'s executive chairman of the board and chief technology officer. Photo by Oracle, courtesy of Flickr.

Software giant Oracle Corp. yesterday snapped up energy data company Opower for $532 million, underscoring how important it has become for utilities to give their customers a better digital experience.

The acquisition follows Honeywell International’s $5.1 billion purchase of Melrose Industries’ metering company Elster in 2015 and Google’s $3.2 billion acquisition of smart-thermostat maker Nest Labs Inc. in 2014. Each partnership is different, but they show that energy data that had once been of little value now means big money for some of the world’s largest companies.

"Broadly speaking, utilities are looking to redefine how they interact with their customers," wrote Andrew Mulherkar, an analyst with GTM Research, in an email. "They want to provide a digital experience comparable to that of other industries. Oracle and Opower had been moving in this direction independently."

Opower is famous for introducing a feature on residential power bills that compares one home’s electricity usage with another — a behavioral trigger that propels energy savings. It builds digital platforms that are the intermediary between utilities and customers, using smart-grid data to stimulate energy savings and to make the clunky relationship with utilities less frustrating.

The company, based in Arlington, Va., is one of the few successful clean energy companies in the Mid-Atlantic. It was founded in 2007 and went public two years ago. Opower says it works with 100 utilities, gathers information from 60 million customer meters, and has its fingerprints on two-thirds of all smart-meter data in the United States.

Despite these successes, it has had a tough year, which might have drawn it into the arms of Oracle.

The company’s stock price declined from a high of $12 a share last June to a low of $6 two months ago. Last month, it laid off about 7.5 percent of its 600-person staff. At the time, it said the job cuts were to hasten profitability, but in retrospect, their object may have been to prepare for its new marriage with Oracle.

Opower will become part of Oracle’s utilities business, a relatively small part of the software colossus. Oracle appears to be on a campaign to expand its cloud-computing capabilities. Last week, it bought Textura, a software firm that is a computer platform for building construction.

Mark Bünger, a research director at Lux Research, said that Opower brings capabilities to Oracle that may bind it more tightly to power companies.

Oracle’s utilities business has, he said, focused on back-office tasks like order management, billing and planning, functions that are important but that aren’t especially tailored to electric utilities. The addition of Opower will give Oracle access to an entirely new range of data, much closer to the end customer, which could be combined with its existing data sets in new ways.

"Opower gets them into the downstream part of the market," Bünger said.

Oracle claims that more than 50 percent of Opower’s utility customers also use Oracle.

The rollout of smart meters, combined with the embrace of cloud computing by energy companies, has made available massive volumes of energy data that never before existed. Firms of all sizes are seeking to turn it into profits, by saving customers either energy or time. They range from older multinationals like Schneider Electric to a passel of midsize and small firms. One is EnerNOC, a Boston company whose largest business is providing energy savings to big companies like Eaton and Coca-Cola, but that also runs demand-response programs between utilities and businesses.

Events like the Opower acquisition are "accelerating the conversations we’re having," said Tim Healy, the CEO of EnerNOC, in an interview.

Opower and other firms have developed specialized, cutting-edge technology for the electricity industry. Opower has brought online "unsupervised machine learning" tools that can take unstructured information and turn it into reports and forecasts, Bünger said.

Young companies like Opower "have tech advantages that have taken them to a certain point, but now it’s about relationships with utilities. Oracle will bring more of that marketing and sales oomph to Opower," Bünger added.

Opower’s stock climbed steeply on the news, closing at $10.29 on Monday, just 1 cent below the purchase price promised by Oracle.