Oral arguments: the blow by blow 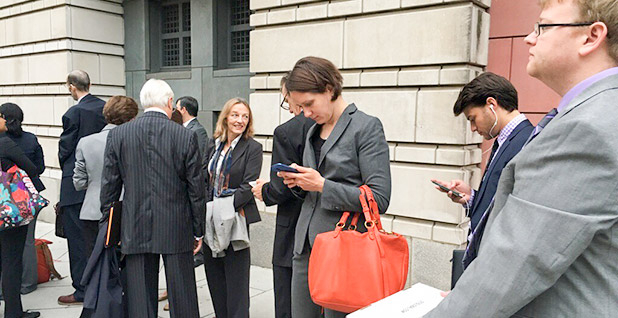 A line yesterday morning outside the U.S. Court of Appeals for the District of Columbia Circuit. Photo by Emily Holden.

After seven hours of oral arguments over the landmark Clean Power Plan yesterday, U.S. EPA’s allies are framing the match as a victory.

"I was very pleased with the way the arguments went," attorney Sean Donahue said after arguing on behalf of environmental groups. "The court was obviously … incredibly well-prepared and had dug deeply into the really extensive briefing and record."

Environmental Defense Fund attorney Vickie Patton said the climate rule had a "good day in court," and Natural Resources Defense Council attorney David Doniger noted that "the court was very skeptical of many of the arguments from the opponents."

Outside analysts also put early bets on EPA, cautiously noting that both the court’s political makeup — six judges appointed by Democrats, four appointed by Republicans — and the judges’ lines of questioning indicate an advantage for the agency.

Still, state and industry petitioners said they were confident in their own odds.

"Today our coalition made very strong arguments about the illegality of the President’s Power Plan," West Virginia Attorney General Patrick Morrisey (R) said in a statement. "We finally had our day in court and it didn’t disappoint."

Morrisey couched his comment, however, by raising the possibility that the challengers’ victory may not necessarily come at the appeals court level but will come eventually.

"All along I’ve been very clear," he said. "While I don’t know exactly when and where, I’ve always believed that we have the law on our side and will successfully defend coal miners and all the hard working families in our state. We now await the court’s decision."

The highly anticipated court date over EPA’s carbon-cutting rule for the power sector stretched hours beyond its allotted time yesterday at the U.S. Court of Appeals for the District of Columbia Circuit.

During the proceedings, the 10 judges sparred with attorneys and one another at times, grappling with both high-level questions and technical issues. Arguments about EPA’s authority for the rule dominated the time.

EPA Administrator Gina McCarthy joined the packed courtroom for the first half of arguments, while acting air chief Janet McCabe, General Counsel Avi Garbow and others stuck it out for the full day.

"We’ve all been through a marathon today," she said. "You have given us all we need and more, perhaps, to work on it."

Beyond the fence line

Right out of the gate, Republican appointee Judge Thomas Griffith asked West Virginia Solicitor General Elbert Lin to justify a core element of challengers’ argument: that the rule is transformative.

The magnitude of the rule’s impacts is a key issue in the case. The judges spent much of the first section of arguments weighing whether they should apply a standard from the Supreme Court’s Utility Air Regulatory Group v. EPA. In the 2014 case, the court held that EPA could not exercise major, transformative power without a clear statement from Congress on the issue.

Dorsey & Whitney LLP attorney Jim Rubin, who is not part of the case, noted that several of the judges suggested EPA would be entitled to deference on its interpretation of a "clear statement" from Congress.

The arguments featured lengthy discussion of EPA’s authority to set requirements that rely on generation-shifting for electricity. Lin and Sidley Austin LLP attorney Peter Keisler raised challengers’ long-standing position that EPA cannot use Section 111(d) of the Clean Air Act to regulate "beyond the fence line" of individual power plants.

"What this is doing is very different from what Section 111(d) is all about," Lin said, arguing that the provision is limited to performance standards at facilities, not "restructuring" the grid.

Kavanaugh seemed to agree, calling the provision a "thin statute" to support the climate rule. He likened it to the George W. Bush administration’s post-9/11 attempt to detain a suspected enemy combatant, a U.S. citizen, without due process. The Supreme Court ruled in 2004 that U.S. citizens are entitled to due process.

But several judges challenged the argument, noting that the provision requires EPA to consider the "best system of emission reduction," a term some suggested could be reasonably interpreted to include the Clean Power Plan’s broad approach.

Department of Justice attorney Eric Hostetler, representing EPA, argued that the approach is based on industry and states’ own use of generation-shifting, resulting in a rule "cost-effectively relying on procedures industry already uses."

"Here, EPA looked to what is going on in the real world," he said, noting that the agency reviewed 10 states already using programs to limit carbon dioxide.

Paul Hastings LLP attorney Kevin Poloncarz, representing power companies in support of the rule, then argued that "generation-shifting is business as usual for the power sector."

Environmental attorneys said afterward that Poloncarz’s arguments could be particularly persuasive to the court.

"They understood that the big fiction in the other side’s case is that the power industry was just stable and happy delivering coal-fired power and nothing was changing until EPA came along with this big bad power plan," Doniger said.

Moving on to an ever-complicated statutory issue, the court spent the second section of oral arguments grappling with two versions of a 1990 amendment to the Clean Air Act.

In what some have called a "legislative glitch," the statute includes two versions of the amendment, which prohibits double-regulation of either a source or a pollutant, depending on whom you ask.

"So long as this court gives some effect to both amendments, we win," DOJ attorney Amanda Berman said.

"It seemed like the courts were searching for some reason to not ignore that amendment," he said.

Kavanaugh found himself in need of a "stiff drink" to make sense of challengers’ arguments that the court should consider only the House version. He and Judge Sri Srinivasan, an Obama appointee, went on to spar over Congress’ intent when it drafted the two versions.

Judge Nina Pillard, a Democratic appointee, took issue with the result of challengers’ position that EPA cannot use Section 111 to regulate a source that has already been regulated under Section 112.

"I’m going to make you go on the right side of the road and you have a speed limit," she said, drawing a hypothetical scenario about why EPA should be able to limit carbon from already-regulated power plants.

Pointing to the Supreme Court’s 2011 decision in AEP v. Connecticut, which accepted industry’s argument that corporations cannot be sued for greenhouse gas emissions under federal common law because the regulation of greenhouse gases falls under EPA’s jurisdiction, Judge Patricia Millett, a Democratic appointee, asked whether challengers were pulling a "bait and switch" by now claiming EPA’s style of regulation is impermissible.

Arguments over federalism featured constitutional heavyweights David Rivkin Jr. of BakerHostetler and Harvard University professor Laurence Tribe, whose role in the case has been controversial to environmentalists who are used to seeing him on their side.

According to Rivkin, the Clean Power Plan gives states "no choice but to implement federal policy of generation-shifting." The approach unconstitutionally "commandeers thousands of state workers and hours," he said.

Tatel questioned the characterization, saying it would render unconstitutional the Americans with Disabilities Act because the law relies on action from private industry and states. Tribe countered that the Clean Power Plan would be like Congress failing to pass the ADA and an agency instead forcing states to pass mini-ADAs.

Berman argued that the climate rule is "classic cooperative federalism," levying no penalties or sanctions on states.

Critics maintain that the rule would require extensive action by state regulators to oversee rebalancing of the electric grid, robbing them of their prerogative to decide state energy policy.

"If EPA wins its case, the Clean Power Plan will mark a substantial assertion of federal authority into state planning and control of energy policy," Bracewell industry attorney Scott Segal said in an email. "Consumers, including small businesses, schools, hospitals, and manufacturers, stand to be hurt substantially for very little if any gain."

Finally, the court heard two sections of procedural arguments. Crowell & Moring attorney Tom Lorenzen argued that the final version of the rule was so different from the draft that EPA should have opened it back up for comment.

"You can’t promulgate a rule that you said you weren’t going to do," he told the court.

Petitioners have filed several petitions for EPA to reconsider the rule, but the agency has not yet responded. Under court precedent, the pending nature of the petitions would preclude judicial review.

Lorenzen urged the court to reconsider its position on that issue, arguing that EPA has effectively made public that it will deny the petitions — making it unfair for the challengers to have to wait for the agency to formalize such a decision.

DOJ attorney Norman Rave noted that EPA is still considering the petitions, which rolled in from several parties between August and December of last year.

The final issue of the day was a loaded one: Is the Clean Power Plan actually achievable for states? Wisconsin Solicitor General Misha Tseytlin and Hunton & Williams attorney F. William Brownell argued that EPA’s record for the rule points to evidence that several states will be unable to meet the targets.

Kavanaugh and Judge Judith Rogers, a Democratic appointee, questioned whether it was "too early in the game" to address that issue and pressed EPA to explain whether the challengers would have future opportunities to seek judicial review if the plan proves unachievable.

DOJ lawyer Brian Lynk noted that EPA would consult with states struggling to comply and that they could petition for a new rule and head to court at that point.

Doniger, the NRDC lawyer, disputed opponents’ doubts about achievability but noted that the court need not address the issue in this case.

"The mechanisms are there," he said. "You ask for EPA to change some aspect of the rule, and if they refuse, you have a right to review."

In other words, if EPA wins this case, the legal battles are far from over.

"There’s not going to be a shortage of litigation," he said.