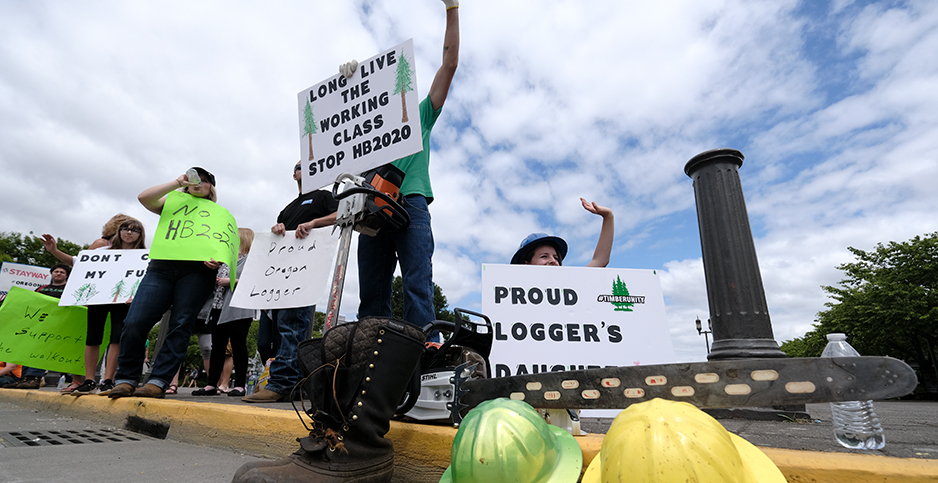 Oregon was supposed to be the crowning achievement for greens in a year that has seen liberal states take unprecedented action to curb greenhouse gas emissions.

Among the string of victories for climate hawks: New York committed to decarbonizing its entire economy by midcentury. New Mexico and Washington pledged to cut all carbon from their power plants. Colorado empowered regulators to green the economy, and Maryland and Nevada ordered up big increases in their supplies of renewable electricity.

But only Oregon had an actual plan for cutting emissions from every sector of its economy.

Early last week, the state appeared on track to join California as the only states with an economywide cap-and-trade system. Democrats, who had labored on the legislation for the better part of a decade, boasted a supermajority in the state Legislature and had pledged to make it a priority. Gov. Kate Brown (D) was an enthusiastic supporter.

Then everything came crashing down.

Senate Republicans fled the state and went into hiding, denying the Senate the quorum needed to vote on the legislation. Brown sent the state police after them, but Senate President Peter Courtney (D) yesterday said the bill lacked the votes to pass (E&E News PM, June 25).

In the chaos that followed Courtney’s announcement, it was not clear if the bill was actually dead. Brown and House Speaker Tina Kotek (D) pledged to fight for the legislation. The governor, speaking to climate activists outside the Capitol, framed Republicans’ walkout as an affront to democracy.

"I’ve said many times, and I’ll say it again: Future generations will judge us not on the fact of global climate change but on what we’ve done to tackle it," Brown said. "We are and we will with your help."

The debate has been animated by threats of violence. Democrats canceled Saturday’s legislative session after police warned of a credible threat from militia groups, which had enthusiastically spoken out in favor of the Republican walkout. GOP lawmakers have disavowed the groups.

Jonathan Lockwood, an adviser for the Heartland Institute who acts as a spokesman for the Oregon Republican Party, sought to shift the blame back on Democrats. He argued that the party’s liberal Portland base was so hellbent on passing climate legislation that it jeopardized other bills under consideration before the close of the legislative session later this week.

"The cap-and-trade bill here in Oregon is a sloppy attempt at passing a crony slush fund in the name of addressing global climate change that fails to adequately address real environmental concerns," Lockwood said.

He added, "The bill gives our corrupt governor and a new slush fund czar total authority to enter our state into binding contracts with other states and even foreign governments."

The showdown highlights an overlooked aspect of this year’s wave of climate legislation: Even as other liberal states moved forward with climate plans this year, they did so with minimal Republican support.

Even in New York, a state where Republicans have a long history of championing environmental policy, support for the Climate and Community Protection Act was limited. Seven out of 43 GOP lawmakers in the General Assembly voted for the legislation, which calls for net-zero emissions by 2050. Two out of 22 Republican state senators voted for the bill, which codified the state’s carbon reduction targets in law and established a Climate Action Council to develop a plan for meeting the goals (Climatewire, June 18).

"Even in states without substantial fossil fuel reserves, even in states with Democratic majorities, it is not easy to do any of this policy work," said Barry Rabe, a professor at the University of Michigan who studies state climate policy. "It illustrates some big, big challenges for the federal level. We’re not having these conversations in Wyoming or Oklahoma, or even in the Midwestern states that flipped to Democrats."

There are notable exceptions.

Maryland Gov. Larry Hogan, a Republican, voiced displeasure at a new state requirement to boost renewable energy but allowed the bill to pass into law (Climatewire, May 23). In New Mexico, seven Senate Republicans, or nearly half the GOP caucus, voted for the Energy Transition Act, which boosts renewable electricity supplies to 50% by 2030 and eliminates all carbon emissions from the power sector by 2045. Two Republicans in the House voted for the bill.

But the only state that can claim true bipartisan consensus is Nevada, where a proposal to increase the renewable portfolio standard to 50% in 2030 passed unanimously in the state House and Senate (Climatewire, March 13).

Observers said support from utilities in the Southwest was important for winning Republican votes. Public Service Company of New Mexico, the state’s largest utility, initially voiced unease but signed off on the Energy Transition Act after lawmakers included a provision allowing the company to reduce its debt payments on its remaining coal plants.

Even so, environmentalists acknowledged they had hoped for greater Republican support this year. And they expressed concern that the fight over cap and trade in Oregon threatened to overshadow the limited bipartisan consensus that has emerged.

"My hope had been states could not only push solutions, but bipartisanship, and we’ve seen some of that," said Noah Long, who helps direct the Natural Resources Defense Council’s climate efforts in the western United States. "But unfortunately, the national divide is also present in some states, including Oregon."

In Oregon, the debate tracks closely along party lines. Overall, 57% of voters say they are concerned about climate and would like to see a government response, according to polling data collected in March by DHM Research, a Portland polling firm. But Oregonians are sharply divided along partisan lines. While 85% of Democrats said Oregon should do more to address climate, 25% of Republicans offered the same response.

Greg Dotson, a law professor who tracks climate policies at the University of Oregon, said the fight in his state is emblematic of a wider shift. Liberal states’ plans to boost renewables and cut emissions from power plants are attracting increasing support from utilities, in large part thanks to the technological advancements in wind and solar, he said.

But Oregon’s plan goes beyond power plants. It would tackle pollution from cars and trucks in particular. Transportation emissions increased every year between 2014 and 2016, when they accounted for 39% of Oregon’s greenhouse gases. That was the most of any sector of the state economy (Climatewire, March 18).

It also makes cap and trade a threat to the oil industry, said Dotson, who previously served as the energy director at the Center for American Progress, a liberal think tank.

"I think that is what this is about."

Republicans hailed the developments, saying they were a reflection of voters’ concerns over the cost of Democrats’ climate policy. Earlier this year, Virginia Republicans effectively blocked their state from joining a cap-and-trade program covering power plants in 10 Northeastern states.

"We think their voices need to be heard and respected, and we don’t believe that they are," Knopp said. "They are trying to create the most complicated and expensive form of carbon reduction. There is a simple and less expensive way."

He called for focusing on forest fire prevention and electric vehicles.

Greens called those arguments disingenuous. Lawmakers held field hearings on the bill across the state to solicit input. Fire prevention is needed, greens say, but does not constitute climate policy on its own. They also maintain that Republican warnings on the impact of gasoline prices have been consistently overblown.

GOP lawmakers made similar arguments several years ago when the state passed a clean fuel standard, which requires the carbon intensity of transportation fuels to be gradually reduced over time. In 2018, the program cost less than a penny per gallon while cutting 948,000 tons of carbon, according to state data.

"What we’ve seen here is the Republicans only play by the rules until the rules don’t work for them," said Meredith Connolly, Oregon director for Climate Solutions, an environmental group. "They have no alternative plan, that’s what’s so frustrating. It’s delay, delay, obstruct, obstruct."

Boeing, in a statement, said it was committed to reducing emissions but confirmed it was against the bill. It did not answer questions about its lobbying.

The company did not elaborate on its concerns. Supporters of the bill have questioned Boeing’s arguments. They note the company’s facility does not meet the emissions threshold for regulation. Much of Oregon’s electricity, meanwhile, comes from hydropower. The remaining portion would be exempted for nine years under the legislation.

Leah Stokes, a professor who tracks climate policy at the University of California, Santa Barbara, said Oregon is emblematic of the pressure corporate interests put on Republicans to oppose emission reduction programs.

Republicans once backed cap and trade, she noted. Northeastern Republicans like former Govs. George Pataki of New York and Mitt Romney, then of Massachusetts, led the charge to establish the Northeast’s cap-and-trade program for power plants. Arnold Schwarzenegger, California’s last Republican governor, signed off on the Golden State’s program. And the late Sen. John McCain (R-Ariz.) ran on cap and trade during his 2008 presidential bid.

But concentrated and persistent pressure from fossil fuel interests in particular has made cap and trade an anathema among Republicans today, she said.

"Climate change can be very bipartisan as long as we’re not doing anything about it," Stokes said. "As soon as it has teeth, the fossil fuel industry and the electric utilities drive polarization among Republicans."