Oregon delegation in the driver’s seat 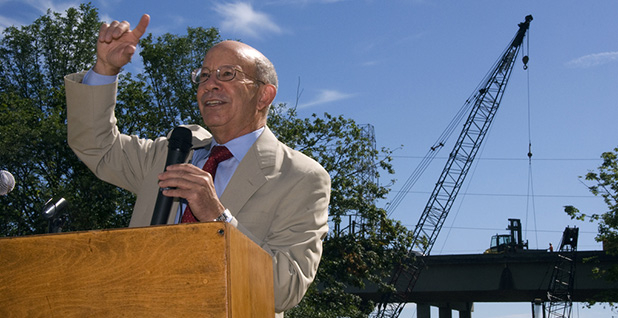 Rep. Peter DeFazio (D-Ore.), chairman of the Transportation and Infrastructure Committee, speaking at a bridge groundbreaking in his home state in 2009. Oregon Department of Transportation/Flickr

The bipartisan allure of infrastructure stems from the fact that building roads, bridges, water projects and electric grids tends to affect nearly every state and congressional district.

But there’s one state in particular that will have an oversize influence on drafting infrastructure legislation in the 116th Congress: Oregon.

Despite its relatively small delegation — there are just five House members in addition to its two senators — the seniority of Beaver State lawmakers on key congressional committees means negotiations on infrastructure will be conducted by a wonky collection of Oregonians, some of whom have been waiting for decades to imprint their ideas on a national level.

Consider the House, where Rep. Peter DeFazio (D-Ore.) just took the reins of the Transportation and Infrastructure Committee, which will be the starting point for an infrastructure package this year.

Rep. Earl Blumenauer (D-Ore.) plans to use his senior position on the Ways and Means Committee to press funding options — a perennially thorny issue that sank President Trump’s much-ballyhooed $1 trillion infrastructure package in the last Congress after Republicans shied away from finding revenues.

And although he’s no longer in the majority, Oregon Rep. Greg Walden remains the top Republican on the Energy and Commerce Committee, which could contribute energy-related and rural broadband provisions under its jurisdiction to an infrastructure package.

And while he’s farther down in the seniority ranks, Democratic Oregonian Rep. Kurt Schrader sits on the Energy and Commerce Committee, as well.

In the Senate, Ron Wyden (D-Ore.) will guide revenue talks on the Finance Committee from his ranking member slot, while Oregon’s junior Democratic senator, Jeff Merkley, sits on the Senate’s primary panel of jurisdiction, the Environment and Public Works Committee.

DeFazio demurred last month when asked whether the 116th Congress represented the high point of the delegation’s powers, noting that former Oregon GOP Sens. Bob Packwood and Mark Hatfield chaired the Finance and Appropriations committees, respectively, during the 1980s and 1990s.

But he conceded that "we’ve got a lot of clout to bear" on infrastructure in the current Congress. "It’s going to take a lot of work," DeFazio said.

‘Early in the session’

That work that has already begun in earnest.

DeFazio said Democrats will look to push through a smaller infrastructure bill in the first six months of the new Congress, followed by a major highway reauthorization when the Fixing America’s Surface Transportation Act expires in 2020.

DeFazio said the first package could include long-held priorities, such as improving rural internet access, adding that there are "a lot of things we can do in a longer-term bill" to green transportation.

"We hope to have an infrastructure package writ large done early in the session," he said.

DeFazio and Blumenauer have been meeting regularly with new Ways and Means Chairman Richard Neal (D-Mass.) to talk about revenue options — a topic that DeFazio said he’s also been in contact with the Trump administration on, as well.

"It’s a useless exercise if the federal government can’t be a better partner with the states," he said. "So we have to have more federal revenue one way or another, mostly I’m looking at incremental stuff with bonding, but if someone has bigger ideas, I’m open."

Blumenauer this month acknowledged the passion for infrastructure among the Oregonian delegation.

"We do a lot of work on it," he told E&E News, noting that he spent 10 years on T&I serving with DeFazio, whom he called "superbly qualified" to legislate on the subject.

Blumenauer noted that his own passion for infrastructure stems from the decade he spent as a public works commissioner in Portland. "The reason I went to Ways and Means was to work on infrastructure finance," he said.

Although leadership spurned his idea to create a Ways and Means subcommittee focused on infrastructure, Blumenauer vowed "to ensure that it gets the focused attention it deserves" in the current Congress (E&E Daily, Jan. 4).

Asked about Oregon’s hand on infrastructure, Wyden last month said the delegation is "not just well-positioned, we’ve got an opportunity to take some of the good ideas that Oregonians have given us over the last few years about infrastructure and to work with our colleagues to build bipartisan support for it."

One distinctively Oregonian policy that will likely ripple through infrastructure talks is the state’s vehicle-miles-traveled (VMT) program — the nation’s first — which launched in 2015. Since then, more than a dozen states have launched similar efforts (E&E Daily, Dec. 17, 2018).

Senate EPW Committee ranking member Tom Carper (D-Del.) has spoken approvingly of Oregon’s work on the issue, which aims to charge people by the distances they travel rather than by the per-gallon-of-fuel tax that currently is supposed to fund construction of roads and bridges in the United States but is badly lagging because of technological advances in vehicles and the fact it hasn’t been adjusted for inflation since the early 1990s.

"I think that’s where we need to go, and we’re not going to be there next year or the year after that," Carper said last year. "What we need is sort of a game plan, a path, to take us there over the next 10 years."

DeFazio agrees that the United States will eventually convert to a national VMT program. He’d like to include a national voluntary VMT pilot program "along the lines of what we’re doing in Oregon, which is a voluntary pilot."

"They are doing ways that you can track your mileage to see how it works out in equivalence in terms of revenues and how acceptable different forms of VMT are to people," he said, referencing privacy concerns over the federal government monitoring private vehicles.

DeFazio noted that mobile phone app developers regularly monitor and sell data based on locations, which "starts at your house and shows where you went."

"People don’t want the government to know where they’ve been, but they are being tracked," he said. "We’re not ready to go there as a principal national program yet, but a national pilot would help move us along."

Wyden for his part is eying a revival of "Build America bonds," which were included at his behest in the 2009 economic stimulus law and generated $181 billion in investments.

"We made extensive use of Build America Bonds in Oregon, which I continue to be very interested in because they’re tax credit bonds," he told E&E News last month.

"He has always been about doing big infrastructure and fixing our highways, roads and bridges," Walden told E&E News. "We’ll work together on that."

"It’s just maintenance and upgrades for a lot of our roads," he said, noting the associated suburban congestion that accompanies the growing population of the city of Bend in his district.

Blumenauer noted one other added benefit of the delegation’s interest and clout that could benefit infrastructure negotiations.

"It’s luck of the draw, but it’s nice we’re on the same airplanes," he said.