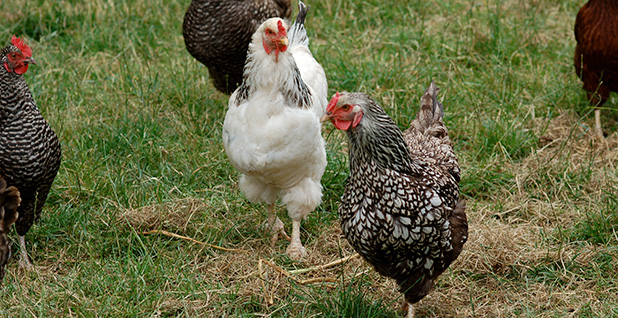 The organic poultry industry is facing difficulties during the coronavirus pandemic. Friends of Family Farmers/Flickr

For all the pain the coronavirus pandemic has handed the meat industry, the implications may be especially strong for a less-publicized segment of the business: organic chickens.

The Agriculture Department reported a 24% decline in slaughter of organic broilers in April compared with a year earlier. If the accounting is accurate, the slide could have big implications not only for poultry, but for the crops farmers grow to feed them and for sustainable agriculture.

Organic agriculture faces particular challenges — and opportunities — in the fallout from the pandemic, according to industry groups and experts in agriculture supply chains.

Because they’re more expensive in stores than conventional food, organic products could be out of reach for consumers who’ve lost income in the slowdown. But because of worries about exposure to the coronavirus, consumers may also be drawn to farmers markets and other local alternatives than to big supermarkets.

The National Chicken Council, an industry group, reported that producing the same amount of chicken as in 1965 contributes half as much environmental impact now, due to less land and water required and a 36% reduction in greenhouse gas emissions.

With environmental issues in the background, the USDA report raises big questions about how the organic side of the industry will emerge from the pandemic. It’s a niche market, accounting for less than 1% of the overall broiler chicken market, the chicken council said.

USDA’s report amounts to 100,000 organic chickens that weren’t slaughtered in April. On a percentage basis, the decline is much sharper than the 3% drop USDA reported for conventional poultry.

The question for market analysts is, where did those birds go?

They might have been euthanized on farms, as has occurred in the hog industry. USDA may have made a mistake in compiling the numbers. Or, an analyst said, it’s possible that plants with conventional and organic lines processed the birds as conventional, rather than go through the cleaning procedures needed to label poultry as organic.

A steep decline in organic poultry would also hurt demand for the organic soybeans and corn that farmers grow to feed them. As much as 70% of organic soybeans goes to animal feed, and broiler chickens account for a third of that demand, Koory said.

Organics have weathered past downturns. In 2008, Koory said, the price gap between organic and conventional groceries narrowed. That may have benefited consumers, but not the farmers who count on higher prices to cover elevated production expenses.

To help with the pandemic’s fallout, a coalition of organic food and agriculture groups has urged Congress to more explicitly direct aid to organic producers. The National Organic Coalition and the Organic Farmers Association also asked Congress to help the agencies that certify organic operations cover the cost of doing so, through direct reimbursements.

In the short term, organic agriculture will suffer from consumers’ decreased buying power, said Anna Nagurney, a professor in the Department of Operations and Information Management at the University of Massachusetts, Amherst. She specializes in food supply chains.

In the long run, Nagurney told E&E News, the pandemic may create a push for farmers markets and other local food outlets, and maybe for more diversified food supply chains that can withstand shocks like the country is seeing now.

"I think this is showing that we need more competition. We need more players in the game," Nagurney said. "I think we really appreciate food."