O’Rourke jumps in, but is he green enough? 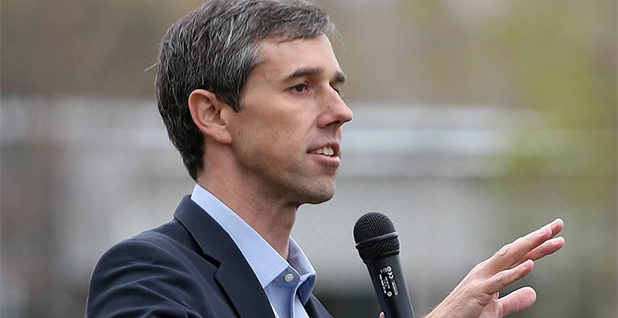 Green activists are worried that O’Rourke’s moderate policy stances through his six years in Congress, along with an image of oil industry ties built throughout his years as a Texas Democrat, make him too friendly to fossil fuels and unwilling to take on the industry for its role in climate change.

O’Rourke captivated a national audience last year with his spirited rallies and social media videos during his failed campaign to unseat Sen. Ted Cruz (R). He launched his campaign for president yesterday, presenting himself as a bridge-builder who has racked up progressive wins by being a moderate.

"The challenges that we face right now — the interconnected crises in our economy, our democracy and our climate have never been greater. And they will either consume us or they will afford us the greatest opportunity to unleash the genius of the United States of America," O’Rourke said in a launch video alongside his wife, Amy.

"Perhaps most importantly of all, because our very existence depends on it, we can unleash the ingenuity and creativity of millions of Americans who want to ensure that we squarely confront the challenge of climate change before it’s too late."

O’Rourke made it clear in his video he would also focus on issues such as immigration, criminal justice reform and rejuvenating rural America.

But O’Rourke can’t make a convincing case that he would do what it takes to fight climate change with his legislative record, activists say.

That includes 2015 votes to lift the ban on crude oil exports, a 2016 vote against an appropriations amendment that would have restricted the government’s ability to allow any study of offshore oil and natural gas drilling in the eastern Gulf of Mexico, and voting for a 2018 bill that would have eased approvals to export small amounts of liquefied natural gas.

"I strongly support the oil and gas industry and the workers of Texas who have helped to make us far more energy independent and secure, who are creating significant job opportunities and economic growth for our state," O’Rourke told The Dallas Morning News in October.

RL Miller, co-founder of the Climate Hawks Vote political action committee, said that kind of position can work in Texas, a state dominated by the oil and gas industry. In fact, her group endorsed O’Rourke in his campaign last year against Cruz.

"I thought that his message — which I would generally liken to an Obama-era ‘all of the above’ message — was very on point and made a lot of sense for Texas," Miller said, referring to former President Obama’s long-standing policy of supporting all energy sources.

But running for president is a different story.

"He needs to not be running for president," she said. "We don’t need another all-of-the-above [candidate]. The politics and the science have changed since 2008. We need for somebody who will commit to much bolder action."

While no companies or corporate political action committees donated to O’Rourke — he pledged not to take their money — he brought in more than $470,000 from fossil fuel employees, according to figures compiled by the Center for Responsive Politics.

The money came largely from the engineers, chemists and other workers concentrated in Texas, where the world’s largest oil companies have headquarters or other large operations.

CRP, a nonpartisan organization that tracks money in politics, found O’Rourke was the second-largest recipient of fossil fuel donations among 2018 Senate candidates nationwide, second only to Cruz.

That meant he technically violated the "No Fossil Fuel Money Pledge" he signed last year, though Miller, whose group helps run the pledge, said she accepts that much of his constituency works in oil and gas.

David Turnbull, spokesman for Oil Change U.S., said O’Rourke should be recognized for his strong statements about climate change, including saying at his first campaign stop yesterday in Iowa, "Literally, the future of the world depends on us right now here where we are."

"He has very strong rhetoric around climate change, but when it comes to votes and positions on the necessary ramp-down of fossil fuels to meet our climate goals, his record is more mixed," Turnbull said, noting his past votes.

"We need whoever is going to be our next president to take on the climate crisis in a comprehensive fashion. That includes endorsing the Green New Deal, but it also includes a managed decline of fossil fuel production in the United States."

At his Iowa campaign stop, O’Rourke did back the Green New Deal, a proposal from Rep. Alexandria Ocasio-Cortez (D-N.Y.) and Sen. Ed Markey (D-Mass.) to rapidly transition away from fossil fuels and to net-zero greenhouse gas emissions — which would almost certainly necessitate the end of fossil fuel use.

"Some will criticize the Green New Deal for being too bold or being unmanageable," he said.

"I tell you what, I haven’t seen anything better that addresses this singular crisis we face, a crisis that could at its worst lead to extinction. The Green New Deal does that. It ties it to the economy and acknowledges that all of the things are interconnected."

‘Champion for the environment’

House Speaker Nancy Pelosi (D-Calif.) sought to boost O’Rourke’s green credentials, telling reporters he established a record in the House of "preserving our planet and protecting our people."

Cal Jillson, a political scientist at Southern Methodist University, said O’Rourke’s record on oil and gas is in line with other Texas Democrats such as Rep. Henry Cuellar and former Rep. Gene Green.

"Beto, as a congressman, knew he was from Texas, and that meant something. And so he voted with Republicans more frequently than he’ll be able to admit in his campaign."

Jillson said that while primary elections usually reward candidates on the political extremes — since those voters are the most likely to show up — he thinks there’s a place for O’Rourke’s brand of moderation.

"’Appetite’ may be too strong a word. I think there’s a place for it," he said.

"You can imagine a circumstance in where there are just too many progressives in the Democratic primary."