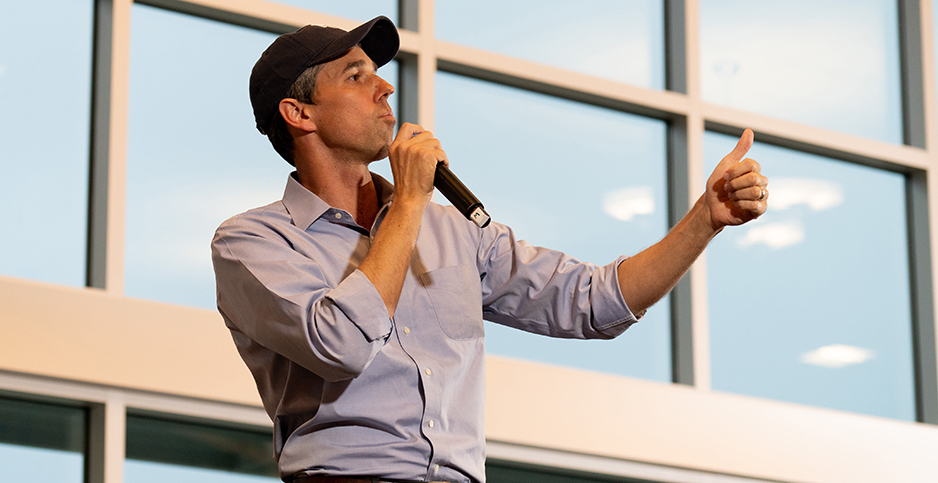 The ambitious climate plan unveiled yesterday by Beto O’Rourke underscored the new reality of global warming politics: Aggressiveness on the issue — at least on the left — has shifted from Congress to the presidential campaign trail.

The former Texas congressman provided a vision that includes legislation to reach net-zero emissions by 2050 — a tall order. It also calls for $5 trillion in spending or tax incentives over 10 years for a wide range of climate projects.

That includes specific ideas — such as $250 billion to research climate science and carbon-cutting technologies — and broader goals such as boosting access to mass transit.

Part of the initiative would be paid through changes to the tax code that would "ensure corporations and the wealthiest … pay their share" and by ending "tens of billions of dollars of tax breaks currently given to fossil fuel companies," according to his proposal.

O’Rourke’s climate pitch comes a week after five other Democratic candidates for president outlined their plans for global warming in a series of town hall events on CNN.

They included Sens. Kamala Harris (D-Calif.), who said climate change necessitates a robust new policy for water use and conservation, and Elizabeth Warren (D-Mass.), who promised to put a moratorium on new drilling and new mining on federal lands.

"We should not be selling out for pennies on the dollar to mining companies and to oil companies our national treasures," Warren said at the time (Climatewire, April 23).

Inslee, who has supported ideas such as taxing carbon emissions, says his top priority as president would be "defeating climate change."

Contrast those suggestions with what’s ahead this week in Congress.

The House plans to vote in the coming days on a bill that aims to keep the United States in the landmark Paris climate accord — the bare minimum of what most House Democrats can agree on (E&E Daily, April 29).

Party leaders have floated the possibility of advancing additional climate legislation, but it’s unlikely that any of these measures will approach what’s being proposed on the campaign trail.

This isn’t a surprise. Right now, O’Rourke and his Democratic rivals are trying to distinguish themselves in a crowded primary field, and a bold climate plan is a good way to attract voters’ attention.

Contrast that to Democratic lawmakers — especially in swing districts — who have to maintain broad appeal with a more conservative set of voters.

That aligns with the simple reality that far-reaching climate bills have almost no chance of gaining enough support in the next two years from President Trump or the Republican-controlled Senate. House Democratic leaders gain little politically by forcing their vulnerable members to take votes on climate bills that are unlikely to become law.

Even so, it’s useful to examine the gap between what White House candidates are proposing and what congressional Democrats aim to pass in the short term — for no other reason than it could foreshadow future debate between the two branches.

Take, for example, the Green New Deal. No fewer than seven Democratic presidential candidates have co-sponsored a resolution that supports the Green New Deal, which includes a plan to fight climate change with a government-led jobs program. That includes several top-tier contenders, including Harris, Warren and Sens. Amy Klobuchar of Minnesota and Bernie Sanders of Vermont, an independent.

But the idea has had a rocky road so far in Congress. In spite of attracting more than 90 House co-sponsors, Speaker Nancy Pelosi (D-Calif.) has resisted calls to put the measure on the floor. Meanwhile, the Senate voted in March on the Green New Deal — but only because Senate Majority Leader Mitch McConnell (R-Ky.) saw it as a way to sow discord among Democrats (E&E Daily, March 27).

It failed 0-57, as most Senate Democrats simply voted present.

The reticence could hamper efforts by O’Rourke to institute bold climate policies if he manages to win the Democratic primary and defeat Trump in 2020.

The reason? Many of the biggest proposals require buy-in from federal lawmakers.

That includes his aim to mobilize $5 trillion in climate spending over 10 years, an effort he pledged would be the "very first bill he sends to Congress." So, too, would his desire to "work with Congress" to create an enforceable standard that would guarantee the United States achieves "net zero emissions by 2050 and be halfway there by 2030," according to his proposal.

And in a plan full of carrots, O’Rourke reserves at least one stick for his home-state energy industry: ending tax subsidies for fossil fuel companies — an idea that also would require congressional approval.

The Permian Basin in Texas has driven much of the country’s new exploration and drilling, and the companies behind the boom have been mostly independent producers — the kind of smaller and midsize companies that get the most generous tax subsidies, said Peter Erickson, a senior scientist at the Stockholm Environment Institute.

"Tax breaks are huge for oil and gas producers in the Permian, so he is actually proposing something that would bite pretty substantially in his own state," he said, adding that research has shown those kinds of federal and state subsidies boost investor returns about 10 percentage points.

Perhaps sensing the complications a future Congress could present, O’Rourke also laid out steps he could take through executive authority if elected. That includes reentering the Paris climate accord — which some of his rivals, such as Klobuchar, also have endorsed — and strengthening regulations to reduce carbon emissions from cars and power plants.

"Those are super-popular things with the public and congressional Democrats, and they can be done right away," said Ryan Fitzpatrick of Third Way, a group that describes itself as a center-left think tank.

That said, Fitzpatrick agreed that the buzz around climate change — both in Congress and on the campaign trail — could lead to dynamic debate.

"Right now, you have a lot of members of Congress who are preparing really smart, really ambitious plans to get to zero [emissions] by 2050," Fitzpatrick said. "There will be no shortage of ideas for solutions to debate."