‘Our focus here should be on stewardship’ — Pruitt 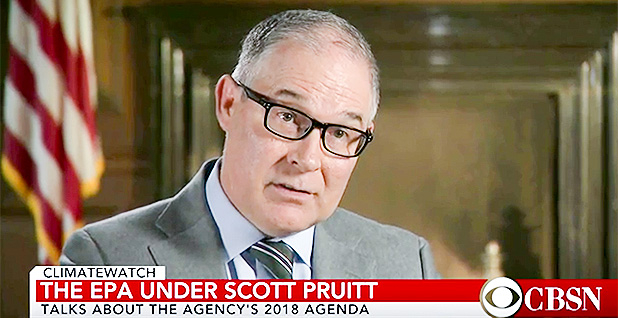 U.S. EPA Administrator Scott Pruitt is touting his work already done at the agency and his plans for EPA over the coming years.

In an interview with CBS News, Pruitt said EPA has sought to provide "regulatory certainty" over the past year as the agency has proposed to roll back several Obama-era regulations like the Clean Power Plan, which was designed to curb power plants’ carbon dioxide emissions. Asked whether the philosophy behind his actions was meant to protect the environment or business, the EPA chief said it was neither.

"Well, it’s neither. I mean, our focus here should be on stewardship," Pruitt said.

Regarding the Clean Power Plan, Pruitt disapproved of the rule, saying it was an example of EPA "picking winners and losers in the development of electricity" by favoring renewable energy over the use of natural resources like coal and natural gas.

Pruitt also set a goal for EPA of eradicating lead from drinking water within 10 years. "It can be done," he said.

In addition, the administrator was asked about his top aides coming to EPA from industry and whether the American public should be comfortable with that transition. Pruitt said he doesn’t buy into that "paradigm."

"And I will tell you if we have companies, industries, citizens who violate the law, we’re gonna prosecute them. But we should not start on the premise that all people are that way or all industries are that way."

Pruitt also was asked about remarks by one of his newest science advisers — Michael Honeycutt, chairman of EPA’s Science Advisory Board — that discounted the health benefits of reducing ozone pollution.

"Ozone is something that we — we most definitely have to regulate. It’s a very important thing that we regulate," Pruitt said, disagreeing with those comments.

In fact, Pruitt has no choice in the matter because the Clean Air Act requires EPA to regulate ground-level ozone, a lung irritant that is the main ingredient in smog.

In the last decade, however, repeated battles have erupted over how strict the agency’s ozone standard should be to adequately protect public health. Honeycutt, the toxicology director for the Texas Commission on Environmental Quality, was a prominent foe of EPA’s 2015 decision to tighten the threshold to 70 parts per billion, even helping to arrange a workshop to make the case for leaving the standard at its previous 75-ppb level (Greenwire, April 14, 2015).

Pruitt named him last fall to chair the Science Advisory Board, which has no direct role in setting air quality standards but furnishes outside expertise to the agency on an array of topics.

Pruitt gave a separate interview to The Wall Street Journal discussing his plans at EPA, which was published yesterday. The administrator didn’t deny outright reports that he is interested in succeeding Jeff Sessions as attorney general in President Trump’s Cabinet (E&E News PM, Jan. 5).

"I thoroughly, thoroughly enjoy what I’m doing," Pruitt said. "What does it say in Scripture? ‘Whatever your hand finds to do, do it with all your might.’ And that’s what I’m doing."