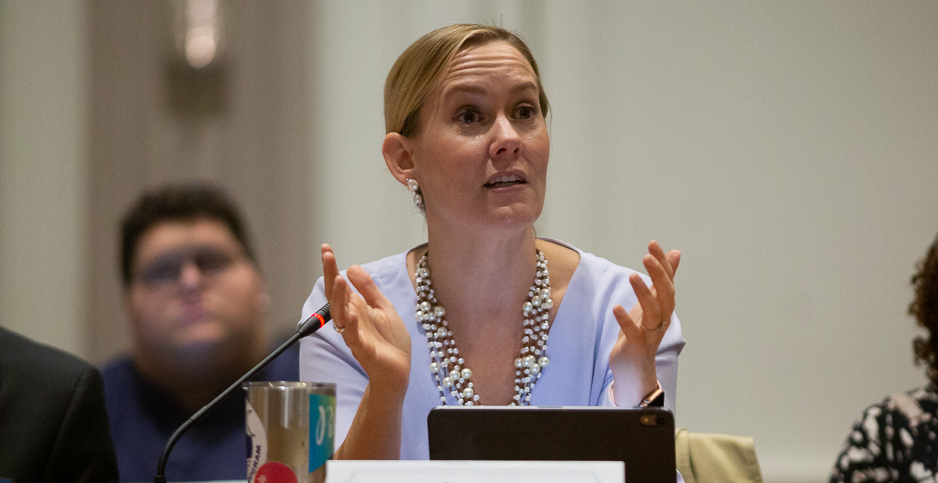 Acting EPA air chief Anne Austin is leaving her post just as she accepted it: quietly.

After a year and a half as provisional head of the Office of Air and Radiation, Austin is expected to step down from day-to-day duties as early as today in an exit that was planned even before President Trump lost his reelection bid.

But if Austin was a discreet presence at EPA who rarely made public appearances, her immediate legacy rests in her role as closer for a historic string of controversial initiatives started by Bill Wehrum, who previously ran the air office.

"She didn’t have any other agenda apart from what was already on board," Leslie Sue Ritts, an environmental lawyer whose clients include a coalition made up of large manufacturers, said in an interview. But Austin, aided by a small clique of other political appointees, managed to follow through without the din of contention over ethics issues that dogged Wehrum until he abruptly resigned in June 2019.

Among the projects completed on her watch: revocation of the legal basis for power industry air toxics regulations, a divisive review of national soot standards, and rollbacks of both Obama-era vehicle emissions standards and methane regulations on the oil and gas industry.

The push has continued into her final days. A rule published yesterday could hobble President-elect Joe Biden’s attempts to curb carbon dioxide releases from refineries and other industries (Climatewire, Jan. 13).

Even an ongoing bid to tighten emissions standards for heavy-duty trucks has the backing of engine manufacturers and has the trucking industry worried that California might otherwise fracture the national market by setting its own rules (Greenwire, Jan. 28, 2020).

John Walke, clean air director at the Natural Resources Defense Council, said he agrees that Austin continued with Wehrum’s agenda — one that he described as antithetical to EPA’s mission of protecting human health and the environment.

"The agency was turned over to saboteurs, and that’s how they carried out their duties for four years," Walke said.

Over the long term, the staying power of that agenda will be decided by the courts and the incoming Biden administration. For example, EPA’s decision last month to keep the current soot standards — disregarding the conclusions of agency career staff that they are effectively contributing to thousands of premature deaths each year — was targeted yesterday in a lawsuit brought by California and 16 other states (E&E News PM, Jan. 13).

Critics are urging the Biden administration to revisit it regardless of the outcome.

Austin’s next step is undisclosed. As E&E News previously reported, she filed paperwork in September indicating that she was pursuing a job with Bracewell LLP, the law and lobbying firm headquartered in her home state of Texas (Greenwire, Oct. 20, 2020).

Whether a position has materialized is unclear; Austin did not respond to interview requests, and a Bracewell representative also did not reply to text, phone and email messages yesterday.

Part of a well-heeled and well-connected Texas family, Austin — known as Anne Idsal before her marriage last year — joined EPA in late 2017 as head of its Dallas-based regional office. She had previously served as top attorney for the Texas Commission on Environmental Quality.

"Anne is an accomplished lawyer and civil servant who will make an immediate impact in providing positive environmental and health outcomes as a regional administrator," then-EPA chief Scott Pruitt told agency employees in announcing her hiring (Greenwire, Dec. 11, 2017). In that job, she signed off the next year on a plan to scrap Obama-era requirements for new sulfur dioxide scrubbers on coal-fired power plants in Texas (E&E News PM, Aug. 17, 2018).

That plan, since made final, substitutes an emissions trading program that critics say will do nothing to lower releases of the lung-damaging pollutant from individual plants.

In early 2019, Austin moved to EPA headquarters to serve as Wehrum’s lead deputy (Greenwire, March 26, 2019). When Wehrum resigned three months later as assistant administrator for the air office, she stepped in to replace him on an acting basis.

The "inside skinny" was that Wehrum had encouraged her to come to Washington with the express intention of her taking his place, Ritts said. In an email, Wehrum — now back in private practice with his own law firm — did not address a question from E&E News on that score, but described Austin as "very smart, a highly effective leader, and a nice, down-to-earth person. She did a great job and leaves her own unique legacy at OAR." He did not reply to a follow-up question asking him to elaborate on what made that legacy distinctive.

Trump never nominated Austin to get the job on a Senate-confirmed basis; her official title remains principal deputy assistant administrator. If she lacked Wehrum’s deep familiarity with Clean Air Act issues, she didn’t have the baggage that followed him to the EPA position because of his prior work as a lawyer for polluting industries. She also brought a defter, less confrontational touch to the job.

"She ran it like a pro," said Miles Keogh, executive director of the National Association of Clean Air Agencies, a group of state and local regulators that has sometimes opposed Trump administration rollbacks. "That doesn’t mean that our work with her was always super-friendly, but she never denied us access to expertise."

But she could also be brusque when challenged. "Thank you, I appreciate that," was her cordial but curt rejoinder after a member of EPA’s Clean Air Act Advisory Committee publicly warned in 2019 that the agency’s truncated timetable for the soot standards review could make its final decision harder to defend in court (Greenwire, Nov. 7, 2019). The course of specific rollbacks did not always go smoothly. The scrapping of the legal justification for the power plant standards, for example, dragged on for months longer than Austin had once predicted.

In what some observers saw as an effort to import more technical expertise, EPA also hired industry insiders to serve alongside her in the air office.

A senior adviser is Kelley Raymond, a former lobbyist for the National Association of Manufacturers. Karl Moor, a former top lawyer for Atlanta-based Southern Co., now serves as a deputy assistant administrator. Joined by Senior Counsel David Harlow, another onetime industry attorney, and an array of EPA career staffers, they have all been closely involved in furthering the administration’s deregulatory drive, according to meeting records obtained by E&E News under the Freedom of Information Act.

What may have been Austin’s final public appearance came in a virtual meeting last month before the same advisory committee, which she chairs and is made up of representatives from government, industry and environmental groups. She gave a rundown of rulemakings, took two questions and then left 12 minutes ahead of schedule to take another call.