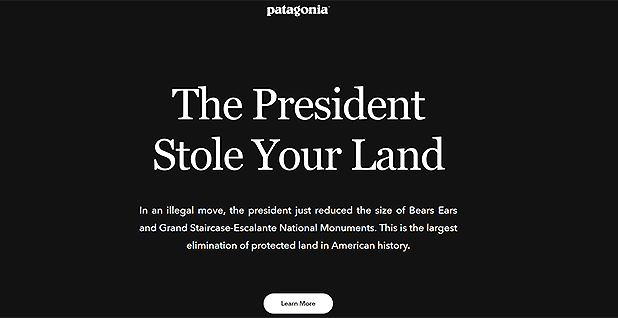 The lawsuit is among a handful of similar complaints filed in the wake of Trump’s visit here to sign two presidential proclamations reducing both Bears Ears and the Grand Staircase-Escalante National Monument, which was shrunk to 1 million acres (E&E News PM, Dec. 4).

"The Navajo Nation is not just going to sit this one out. We always say that we’re a strong nation, and we are, and we’re going to fight this," Navajo Nation Vice President Jonathan Nez said in a press conference with other tribal leaders.

"What transpired … it’s just hard for me to comprehend. It’s just another slap in the face for a lot of us," he added.

"The President was plainly aware that he lacked the authority to revoke a monument and is thus transparently attempting to evade that strict limitation by purporting to reduce it," the lawsuit states, "but, as described herein, the President’s action must be viewed as a revocation, particularly with respect to all objects not included in the two ‘new’ monuments."

‘The President Stole Your Land’

In addition to the tribes’ lawsuit, a host of other opponents filed legal challenges yesterday to the president’s actions.

Earthjustice filed the first of two lawsuits it plans to pursue — starting with the Grand Staircase-Escalante monument, to be followed in the coming days by another targeting the Bears Ears monument — separating the cases because of technical differences between both the sites’ contents and their respective legal histories.

Both lawsuits are expected to focus on Congress’ delegation of authority to the president under the Antiquities Act.

Earthjustice will argue that only Congress, under the Constitution’s Property Clause, retains the authority to diminish or dissolve national monuments.

"It focuses on the president’s lack of authority under the Antiquities Act to remove monument designations in whole or in part. That really stems from the bedrock constitutional principle of separation of powers. In this case, Congress has the exclusive power over federal public lands," she added.

In addition, a coalition of nonprofit organizations has filed its own lawsuit challenging Trump’s reductions to the Grand Staircase-Escalante monument.

It adds: "This action puts at risk a key part of our nation’s natural legacy."

"We’ve fought to protect these places since we were founded, and now we’ll continue that fight in the courts," said Patagonia CEO and President Rose Marcario.

In a statement to reporters, the House Natural Resources panel rejected suggestions that Trump’s actions are illegal, labeling the assertions a "myth."

"Propagators of this particular myth put themselves in the absurd position of claiming that one unilateral presidential action can bind every successor in perpetuity," the statement said. "If this seems more reminiscent of an autocracy than a constitutional democracy responsive to the demands of the people, that’s because it is."

Pacific Legal Foundation constitutional legal fellow Todd Gaziano predicted that the challenges to Trump’s proclamations would be unlikely to succeed.

"There is no reasonable doubt that the president has authority to completely revoke or significantly reduce existing national monuments. There are many hard or uncertain questions in the law, but this is not one of them," he said. "Anyone can file a lawsuit, but the federal courts will have no serious question about President Trump’s lawful authority to revoke or shrink any national monument."

"Today President Trump took a wrecking ball to America’s natural and cultural heritage. In doing so, he showed total disregard for the law, for the ethic of stewardship and for the many small businesses that depend on these national monuments," said Conservatives for Responsible Stewardship President David Jenkins.