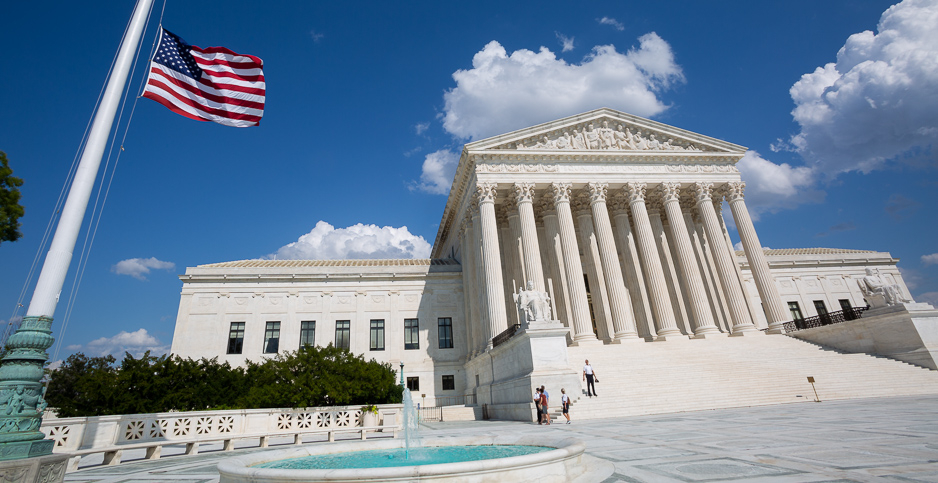 The Supreme Court could take up a case alleging racial prejudice on an offshore drilling platform in the Gulf of Mexico. Francis Chung/E&E News

Peterson’s case challenges the adverse employment doctrine, which narrowly defines discriminatory employment actions as those immediately affecting an employee’s pocketbook — such as hiring, firing, or reductions in pay or leave — said Brian Wolfman, director of the Appellate Courts Immersion Clinic at the Georgetown Law Center.

A ruling in Peterson’s favor would be particularly powerful in many states where courts take a more restricted view of what action can be considered discrimination under that section of the law.

Peterson alleges that his supervisors assigned him and four other black colleagues to work exclusively under harsh outdoor conditions on an offshore drilling platform while five white employees were only assigned indoor work in air-conditioned facilities. His employer also allegedly denied the black workers’ requests to have their assignments rotated to give them a break from the outdoor work.

"When black employees attempted to take indoor water breaks, white supervisors ‘curse[d] and yell[ed]’ and ordered them back to work. During the assignment, one supervisor said of petitioner, ‘[f***] that [n*****],’" lawyers for Peterson wrote in a May 7 petition to the high court.

Peterson resigned from the company soon after the assignment ended and filed a charge with the Equal Employment Opportunity Commission stating that Linear Controls’ work assignments were racially discriminatory. The U.S. District Court for the Western District of Louisiana first heard the dispute, and Peterson later brought the case to the 5th U.S. Circuit Court of Appeals.

Judges for the appeals court, citing prior precedent, sided with Linear Controls’ arguments that its actions did not fall in line with the federal court’s reading of what was legally considered discrimination.

Attorneys for Linear Controls could not be reached for comment, but in a response to Peterson’s Supreme Court petition, the company said the working conditions on the offshore drilling platform did not constitute an "adverse employment action."

The company noted that Peterson’s job description included performing work outdoors as part of his regular duties. It also contended that although a supervisor had once told Peterson to shorten a water break, he didn’t deny him one.

In October, the justices invited Solicitor General Noel Francisco to share the federal government’s view on the dispute.

Francisco’s office has not yet filed its response.

Peterson’s case could serve as an important test of the 5th Circuit’s narrow reading of the Civil Rights Act.

"It’s kind of shocking that you have this case in 2019 because you have this doctrine," said Wolfman, who co-wrote a "friend-of-the-court" brief urging the Supreme Court to take the case.

He added that the Louisiana district court that heard Peterson’s case was bound by the 5th Circuit’s reading of the statute.

The 5th Circuit — which is the appeals court for lower benches in Texas, Mississippi and Louisiana — isn’t the only court to apply a more restrictive interpretation of the law.

"These kinds of tangible matters that affect one’s pocketbook or whether one keeps their employment, those are the kinds of things that the 5th Circuit and 3rd Circuit are focused on," Parrish said.

The Supreme Court could choose to take up the case in order to resolve the appeals courts’ different approaches on the issue, Parrish said.

The justices did not adopt the appellate court’s reading of the statute and instead determined that the action counted as discriminatory if it was "materially adverse" to the employee, but the Supreme Court is not bound by that decision, said Rhonda Reaves, a law professor at Florida Agriculture & Mechanical University College of Law.

"If the Supreme Court were to affirm the 5th Circuit test that only ‘ultimate employment action’ count as actionable ‘adverse action’ this standard would have a detrimental impact on plaintiffs because plaintiffs in every jurisdiction would have to meet this higher threshold to prove their cases," Reaves wrote in an email.

The Supreme Court may also be interested in Peterson’s appeal because it touches on an overarching issue of defining and interpreting terms under Title VII, Emory’s Parrish said.

Georgetown’s Wolfman said that although the easiest way to decide the case would be for the justices to look at what the statute says, he noted that the courts are often concerned about the practical consequences of their rulings.

"It’s not like the floodgates are going to open because they have to prove both factually and legally that they had been discriminated against," he said.