Outside groups ramp up spending to get McGinty through primary 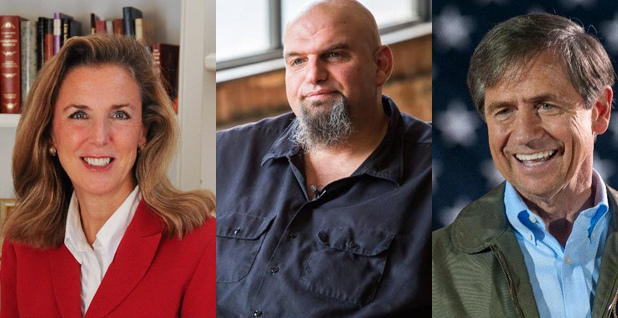 Three candidates are competing in the April 26 primary for the Democratic Senate nomination (left to right): Katie McGinty, John Fetterman and Joe Sestak. Photos courtesy of McGinty, Fetterman and Sestak campaigns via Twitter.

With less than three weeks to go in the battle for Pennsylvania’s Democratic Senate nomination, former White House Council on Environmental Quality chief Katie McGinty continues to trail in polls against former Rep. Joe Sestak — but outside groups, including the Environmental Defense Action Fund and the Democratic Senatorial Campaign Committee, are looking to boost McGinty across the finish line with a surge of last-minute ads.

According to a survey released this week by Republican firm Harper Polling, Sestak still leads the three-way race for the Democratic nod to take on first-term Sen. Pat Toomey (R).

Democrats view the Pennsylvania Senate seat as a top target this cycle as the party looks to flip the five seats it needs to reclaim a Senate majority. Democrats need only four seats if the party retains the White House.

The survey of 603 likely Democratic voters had a 4-point margin of error.

Despite McGinty’s second-place showing, however, the Harper Polling survey noted that she had improved her standing from a March 1 survey when she received 17 percent to Sestak’s 33 percent.

"Our survey findings show that McGinty is capable of capitalizing on the support of her White House backers as the cadre of independent expenditure groups supporting her candidacy are likely to take aim at Sestak," a memorandum describing the survey’s results stated, referring to McGinty’s recent endorsement from President Obama and Vice President Joe Biden, as well as endorsements from groups like the League of Conservation Voters Action Fund and the abortion rights group Emily’s List.

But the same memo noted that despite opposition from the Democratic establishment, including the DSCC, Sestak is himself "beating the odds."

A Franklin & Marshall College Poll from March likewise shows the former House lawmaker, who narrowly lost the 2010 Senate election to Toomey, has refused to cede his lead in the Democratic primary since August. He had a 17-point edge over McGinty in that survey.

But despite Sestak’s close race six years ago, Democratic leaders have been reluctant to embrace him, and outside groups that have backed McGinty hope to elevate her candidacy in the race’s final weeks with a surge of advertising.

This week, Emily’s List launched a 30-second television spot touting McGinty’s Pennsylvania roots and showcasing her time in the White House CEQ with a photo of a youthful McGinty with former President Clinton and Vice President Al Gore. The campaign is part of a $1 million ad buy the group had pledged to spend supporting McGinty.

The Environmental Defense Action Fund also announced its own "six figure" independent expenditure in the Senate race this week, which will go to a direct-mail campaign promoting McGinty’s candidacy.

"No candidate for the United States Senate has a stronger record of environmental advocacy and achievement than Katie McGinty. She knows that Pennsylvania families care about a healthy environment, and she’s making clean energy a priority in her campaign," EDF Action President Elizabeth Thompson said in a statement.

The EDF Action campaign will target 140,000 households in the state with between five and seven direct-mail pieces. The first mailer touts McGinty’s support for renewable energy and infrastructure investments, as well as a higher minimum wage and equal pay for women.

The DSCC’s independent advertising arm is also slated to spend $1.1 million in the final two weeks of the primary, according to advertising reservations made in the state and first reported by The Washington Post.

Although McGinty, a former head of Pennsylvania’s Department of Environmental Protection, has claimed key environmental endorsements in the Democratic primary, the three candidates have continued to spar over their environmental bona fides on the campaign trail.

During a debate Tuesday televised by Pittsburgh ABC affiliate WTAE, they faced off once again over the future of the state’s hydraulic fracturing industry, where they have previously drawn sharp divisions.

Echoing remarks he has made at a previous debate and in a digital ad, Fetterman criticized McGinty for fundraising from energy-industry-related donors during both her Senate primary bid and her failed run for governor in 2014.

"Ms. McGinty wants to run away from her history in fracking. There’s no such thing as a green fracker," said Fetterman, who also criticized McGinty and former Gov. Ed Rendell (D) for failing to institute stricter environmental control on the state’s fracking industry during their tenure.

While McGinty has previously touted fracking as the state’s "secret sauce" for job growth, she once again sought to distance herself from suggestions that she has raised campaign funds from the oil and gas industry (E&E Daily, Feb. 12).

She later added: "I do not have a penny from an oil company, a gas company."

According to the Center for Responsive Politics, which tracks campaign finance data, McGinty has raised less than $50,000 from the energy and natural resources sector for her Senate bid. McGinty reported raising $2 million at the end of last year.

By comparison, Toomey, who had raised $17.6 million through the end of last year, recorded $848,000 in donations from the energy and natural resources sector.

During the Tuesday debate, McGinty likewise sought to tie Sestak to the state’s fracking industry, accusing the former House lawmaker of praising the industry in his self-published 2015 book, "Walking in Your Shoes to Restore the American Dream."

"It’s election season and we have some campaign flip-flopping happening here," McGinty said, contrasting Sestak’s book to his support for a moratorium on fracking in the state.

But Sestak’s campaign has rejected McGinty’s criticism, asserting that she misinterpreted Sestak’s statement that drilling could "assure a common good."

"McGinty accused Sestak of being pro-fracking but this is what Sestak actually wrote: ‘Drilling can assure a common good by offering reduced carbon emissions and less dependence on foreign oil, but it must not be at a greater cost, or even damage, to our commonwealth,’" Sestak’s campaign said in a statement.

Regardless of which Democrat wins the April 26 primary — when voters will also cast ballots in the state’s presidential primary contests — a new Quinnipiac University Poll released yesterday shows the party faces an uphill climb to oust Toomey.

Toomey claimed an edge over both McGinty and Sestak in the survey, which included 1,737 voters and had a 2.4-point margin of error.

But that advantage could shrink as voters narrow their focus on the eventual Democratic nominee. The survey found 64 percent of those polled did not know enough about McGinty to have an opinion about her, and 51 percent said the same of Sestak.

"U.S. Sen. Pat Toomey can take some comfort in the lead he has on his two Democratic challengers, but it’s a lot easier to be the front runner when voters don’t know much about the challengers," Quinnipiac University Poll Assistant Director Tim Malloy said in a memo accompanying the poll results.