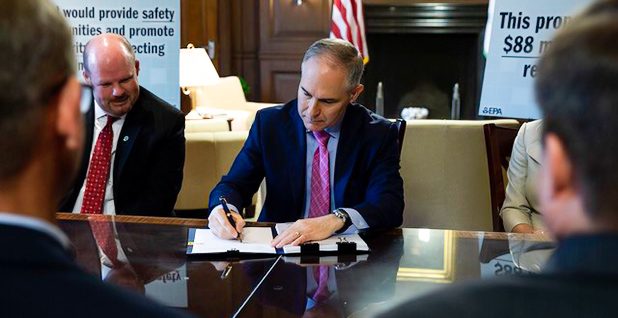 One of EPA Administrator Scott Pruitt’s top political aides has been interviewed by the House Oversight and Government Reform Committee as part of its investigation into the agency under his watch.

Hupp is a former campaign aide for Pruitt when he was Oklahoma attorney general. She came from that state to join him at EPA in the spring of 2017.

Hupp is one of Pruitt’s close aides who received a substantial pay raise without White House approval, which sparked controversy and has since been reversed.

Hupp also emerged as a key figure in arranging Pruitt’s travel and his dealings with various lobbyists, according to EPA emails released under the Freedom of Information Act.

As of now, the Oversight Committee has conducted two transcribed interviews for its investigation into EPA, the committee aide said. They comprise Hupp and Pasquale "Nino" Perrotta, the career EPA special agent who led Pruitt’s security detail and has since retired.

As part of its EPA investigation, the committee has another interview scheduled for this week. The aide also said the committee received another document production from the agency Thursday night and will continue to receive records on a rolling basis.

Hupp and Perrotta were two of five EPA officials Gowdy requested the agency schedule transcribed interviews with his committee staff, according to an April 13 letter sent to Pruitt.

Gowdy has also requested from EPA several batches of documents related to Pruitt’s beefed-up security and pricey travel, beginning with a letter in February asking for more information on the administrator and his aides’ trips, including waivers to fly business and first class.

The chairman sent another letter in April asking for records regarding Pruitt’s rent of a Capitol Hill condo linked to a lobbyist whose firm’s clients have business before EPA.

Last month, Gowdy said he was gathering facts first before drawing any conclusions on the ethics allegations swirling around the EPA chief (Greenwire, April 30).

"We’re going to do it the way I’m used to doing it," Gowdy said on CBS’s "Face the Nation." "Gather the documents, interview the witnesses and then share it at the appropriate time."