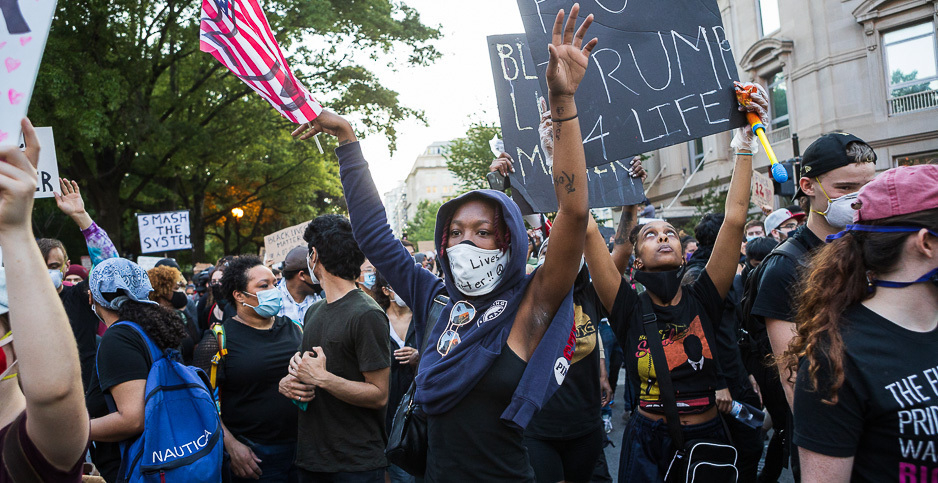 Protesters near the White House in Washington on Wednesday evening. Francis Chung/E&E News

The social justice protests sweeping the country have pushed mainstream environmental groups into a corner, with many struggling to show solidarity without appearing hypocritical.

Most of the largest groups are overwhelmingly white, and their conservation focus has historically ignored the disproportionate impact of pollution on communities of color. Some also have racist and anti-immigrant pasts.

"This moment has laid bare the long and shameful history of institutional and systemic racism against Black and Brown people in this country," they wrote. "We demand action."

But statements like those have met with criticism from some in the environmental justice movement.

"Anyone can come out with a statement," said Robert Bullard, a professor at Texas Southern University. "Racial justice starts at home. Look at your own organization."

Bullard is often referred to as the father of the environmental justice movement; he’s been working on these issues for more than three decades and has written more than a dozen books on the topic.

Racism permeates every institution in America, he said, including the environmental movement.

"Racism is stamped in the country’s DNA," Bullard said. "The best way to show it is to look at the green groups’ agenda and who is on their boards and their staffs and the percent of green dollars that they suck up like a vacuum cleaner sucking up all the dollars in a room. Very few dollars are left for people of color and groups working on environmental justice and against racism."

Data supports Bullard’s argument, though mainstream environmental groups have made efforts to diversify their staffs.

In 2014, the diversity initiative Green 2.0 commissioned a broad analysis of the environmental movement, including the major nonprofits, foundations and government agencies. The results were stark.

It found that while people of color represented 36% of the organizations’ makeup at the time, they didn’t constitute more than 16% in any category. Among nonprofit groups, 12.4% were people of color, while government agencies reached 15.5% and foundations came in at 12%.

The group has continued its work, issuing transparency report cards every year. Executive Director Whitney Tome said there has been progress, but it’s slow.

"I’ve seen a marked change [in] building out their own staff and their own capacity in this area in a way that’s been good," she said. "Not everyone has done it, but a good number of them have."

The most recent report card found that, on average, the organizations added 11 people of color to their staffs between 2017 and 2019 — including two in senior roles. And diversity also increased on boards.

"I am seeing opportunity and people who are stepping in and taking action," she said.

The report card, however, is blunt about the overall picture.

"Though the 2019 numbers are encouraging," it stated, "Green 2.0 cautions against declaring victory."

Outside of the outwardly racist history of the American conservation movement, green groups have long kept environmentalism siloed away from other interrelated policy issues.

Even as the environmental justice movement began to bubble up in localized organizations in the 1980s and 1990s, national groups ignored environmental plights faced by communities of color and kept their focus on conservation, said Mustafa Santiago Ali, vice president for environmental justice, climate and community revitalization at the National Wildlife Federation.

It led to backlash from the environmental justice community.

Although they "often claim to represent our interests," the environmental justice coalition wrote, "in observing your activities it has become clear to us that your organizations play an equal role in the disruption of our communities."

The letter was focused on the Southwest, where mining companies had devastating environmental impacts and the military had used large swaths of land for weapons development and testing. In particular, the groups scolded the Group of 10 for supporting national monument designations on lands that were culturally significant to Native Americans.

And they criticized the lack of people of color within the organizations, calling on them to leave the area until "you have hired leaders from those communities to the extent that they make up between 35-40 percent of your entire staff."

Tome said those efforts were a motivating force for launching Green 2.0 in 2014. After the letter, there was some focus on the issue, but not for long.

But there has been a renewed focus, Ali said.

"When Trayvon Martin and others lost their life, there was silence, but the culture’s shifting, and now organizations are sort of moving with the mainstream in the sense of speaking out and moving towards solidarity," said Ali, a former longtime staffer in EPA’s environmental justice office.

A number of major green groups, including the Sierra Club and League of Conservation Voters, teamed up with local environmental justice organizations last year to produce a collaborative climate policy platform centered on civil rights and economic equality.

"I would say that for the first time in the 30 years that I’ve been working on environmental justice, I’ve seen the green groups make a turn, and for me, it started with the Equitable & Just Climate Platform," said Beverly Wright, executive director of the Deep South Center for Environmental Justice.

The Sierra Club has also made tangible efforts to increase diversity and reach out to communities of color under Executive Director Michael Brune’s leadership, Ali said.

The group was once a home for vehement anti-immigration voices who saw population control as a way to protect the environment. John Tanton, who once held leadership posts with the Sierra Club, went on to found the Federation for American Immigration Reform and had white nationalist beliefs, according to the Southern Poverty Law Center.

Tome agreed, noting that the Sierra Club has taken important steps including on its board and in training its staff on equity issues.

But the environmental movement still has a long way to go. Statements of solidarity are great, Ali said, "but if you’re not willing to change the systemic structures, both inside of your own organizations and to understand and work to change it across our country and in our government, then it’s window dressing."

"They can put their money where their mouth is and give the real on-the-ground support," Wright said.

‘We have to do better’

Major environmental groups have taken steps in recent days to show solidarity with protesters and minority communities, but they’ve done so in different ways.

The League of Conservation Voters was out front with the difficult history that the environmental movement — of which it has been a major part — has had with racial justice and including voices of people who are not white.

"We have not been a fully-fledged ally for racial justice and equity. We have not always spoken up or we have taken too long to do so. We must and will do better," LCV President Gene Karpinski said in a lengthy statement yesterday.

Felice Stadler, vice president for political affairs at the Environmental Defense Fund, similarly pledged that her group sees this moment as a call for more action.

"What these most recent tragic events have underscored is that we can’t just issue statements and think that’s sufficient," she said in a statement. "We have to do better. We know that."

Other organizations have differed in the extent and ways they sought to incorporate environmental concerns — even environmental justice issues unique to black and other oppressed communities — into their responses to the killings and protests.

The Natural Resources Defense Council, for one, put out an unsigned statement standing firmly with protesters.

"We stand up against hatred and injustice. We stand up for human dignity and respect. We stand in solidarity with Black families and communities calling for justice," it said.

Mitchell Bernard, the group’s executive director, expanded on that in a blog post of his own, weaving in the environmental work the group does.

"We will continue to vindicate the people’s rights under the law, to partner with frontline individuals and groups to demand environmental justice," he wrote.

‘We have to move beyond just talking about this’

Groups like the Sunrise Movement and Zero Hour offer an example of what a "21st century" environmental organization looks like, Ali said.

Those organizations, and other supporters of the Green New Deal, generally emphasize climate policy that includes a just transition and addresses the needs of environmental justice communities.

Sunrise held a webinar last night advising members on how to participate in the Floyd protests and how to tie climate and civil rights advocacy together.

Among its advice was not to co-opt smaller protests by wearing the matching Sunrise Movement shirts that members often wear to climate events.

Executive Director Varshini Prakash said at the outset of the webinar that it was the largest call in the group’s history, with roughly 1,800 participants.

"Our vision for a more equitable world is super in line with everything that is happening right now in this country," Prakash said.

While environmental organizations have been slowly incorporating justice concerns into their work, only very recently has the movement started to treat the two issues as one and the same, said Natalie Mebane, associate director for U.S. policy at 350.org.

"You’re starting to see the evolution of the environmental movement as something that we cannot differentiate and compartmentalize," she said. "These climate justice organizations are encompassing and hopefully becoming justice organizations. It’s been a long time coming."

"Right now, many of the environmental organizations are resourced to make the meetings in Washington and sit at the table and do the networking," he said.

"That leaves the people who are on the ground, who are more impacted, that are on the front line of environmental pollution and climate change. Those folks can’t get to the table because of lack of resources," he said.

"We have to move beyond just talking about this."