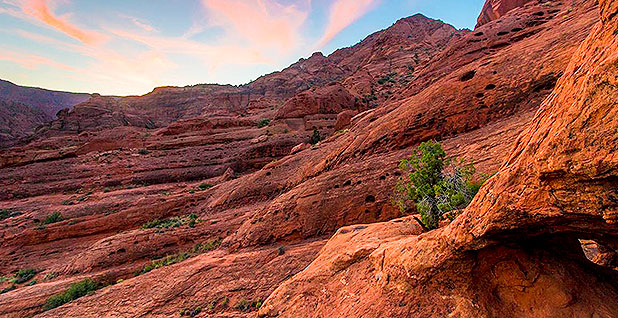 When real estate developer James Doyle acquired more than 2,400 acres outside St. George, Utah, in the 1980s, he envisioned creating an expanse that included nine golf courses and luxury homes.

Instead, in 1990, he found himself the owner of critical habitat for the Mojave population of the desert tortoise, and his lands incorporated into the Red Cliffs Desert Reserve.

In the intervening decades, Doyle sold about 500 acres to the government and transferred the majority of the land to creditors when he declared bankruptcy in 2004. But he still retains 265 acres in the reserve — after repeated negotiations with the Bureau of Land Management have proved largely fruitless.

Now, Utah Republican Sens. Orrin Hatch and Mike Lee are aiming to end the long-running dispute between Doyle and the government over the value of his lands via an arcane legislative measure.

Under S. 2531, the "Red Cliffs Desert Reserve Completion Act," the U.S. Court of Federal Claims would examine Doyle’s case and determine an award based on "any damages and losses sustained … by reason of the Federal Government’s taking of approximately 2,000 acres of his land."

"Litigation is never a shortcut, unfortunately," said attorney Roger Marzulla, who represents Doyle. "This really is the only available remedy for Mr. Doyle."

Marzulla noted that the Senate bill is an infrequently used measure known as a congressional reference, in which a single chamber — the bill must only pass the Senate in this case — can direct the Court of Federal Claims to consider whether compensation is owed by the government and then issue a recommendation back to Congress.

Lawmakers, however, must still approve a payment to the plaintiff through the regular appropriations process, and there is no guarantee Doyle would receive any funds.

Hatch spokeswoman Ally Riding said her office did not have an estimate on how much Doyle could be awarded.

"S. 2531 merely refers a certain unresolved claim; any outcomes — if this legislation passes in the Senate — will be determined in court," she said. A Lee spokesman did not return requests for comment.

In 2015, Doyle sued the government in an attempt to recover $50 million.

A federal judge dismissed that case, ruling that Doyle’s claim was "not ripe" because he has not sought a FWS-issued permit to develop his remaining acreage.

Marzulla argued, however, that because FWS is currently revising the original Habitat Conservation Plan for the reserve, his client is in "limbo" while a new plan is prepared: "There is no procedure by which he can get a final agency action."

He added, "The entire structure of the Habitat Conservation Plan depends on having this 62,000-acre tortoise reserve."

That reserve includes the Red Cliffs National Conservation Area designated by Congress in 2009, which covers nearly 45,000 acres of BLM land. According to a Red Cliffs NCA report issued for fiscal 2015, the reserve also included nearly 14,000 acres of state land and 2,600 acres of private land.

According to court documents, since the reserve’s creation in 1996, the federal government has purchased more than 5,200 acres from private landowners within its boundaries.

That included purchases of more than 500 acres from Doyle, who received $9.3 million in land exchanges and cash.

Doyle did sell a 9-acre strip to the government in 2016 for about $75,000 per acre, Marzulla said, but since the court ruling later that year, no further negotiations have occurred (Greenwire, Oct. 14, 2016).

"The government is unwilling to pay or purchase any of it," Marzulla said of the remaining acres. "They don’t see any particular reason to do anything about it."

He added that Doyle will turn 81 years old this month, "and I think they’re waiting him out."

BLM does not comment on pending legislation. Documents from Doyle’s last court challenge indicate, however, that the federal officials see no requirement to purchase the remaining land.

"Specifically, the government argues that the federal government never entered into a binding agreement with plaintiffs or otherwise agreed to purchase the plaintiffs’ property under the Habitat Conservation Plan," Senior Judge Nancy Firestone wrote in her ruling.

Hansen was the author of a 1996 rider that mandated any inholdings be considered at "current market value" — or as if the lands were not subject to restrictions on development under the Habitat Conservation Plan.

"Current market value today for those inholdings is outrageously inflated," Crook asserted, noting that the high value has made it all but impossible to find federal land that would be a suitable exchange.

"Public lands don’t have a high retail value in the development market compared to potential development lands in the private sector," said Crook, whose organization advocates for conservation. She later added: "It’s frustrated the developers, and I do feel bad for them."

But the decadeslong battle over ownership of the lands is also difficult for federal land managers.

"It makes for very messy management when you have private inholdings on which tortoise protection is supposed to be happening with people who would prefer to develop that land," Crook said.

The Associated Press reported in 2000 that Doyle purchased 2,400 acres of state land in 1990 for about $330 per acre, or $792,000. But after a state law that allowed the sale was deemed unconstitutional, Doyle agreed to pay an additional $1.1 million for the land.

Following a subsequent lawsuit from the Utah Education Association — which claimed the state should have received $10 million — Doyle also agreed to pay the state a portion of any sales from those lands.

According to Hatch’s legislation, Doyle also spent "large amounts of money" to develop the land during the 1980s and 1990s. His actions included procuring water rights, designing transportation and utility corridors, constructing a golf course, and procuring zoning adjustments and development permissions.

Minutes from the HCAC’s February meeting show that Brennan Holdings LLC has offered to sell the government 10 percent of its remaining 662 acres for $8 million, with an agreement to donate the remaining 90 percent. Consultant Jim Raines valued the firm’s holdings at $66 million.

The agreement also would require the state to forgive unspecified property taxes to firm owner Bob Brennan, who argued he has not had access to his land for 20 years. Brennan acquired more than 800 acres under the terms of Doyle’s bankruptcy agreement.

Raines did not return a telephone call seeking comment, but public records indicate that the agreement would be funded in cash, with no land exchanged.

"After 7-8 years of looking at land exchanges, Bob has concluded that there’s no land available in the state of Utah that has sufficient value for exchange," Raines said, according to minutes of the February meeting, which was attended by Red Cliffs NCA Unit Manager Dawna Ferris-Rowley, as well as representatives of the Utah Department of Natural Resources and the Fish and Wildlife Service.

The meeting notes continued: "Jim Raines said that it is official as of today that Bob’s intent is to donate 90% of his land if you can find money to purchase his property in chunks. However, he said it is a time sensitive offer and the money needs to start flowing immediately."

According to the meeting notes, the federal Land and Water Conservation Fund could provide up to $3 million annually for the exchange.