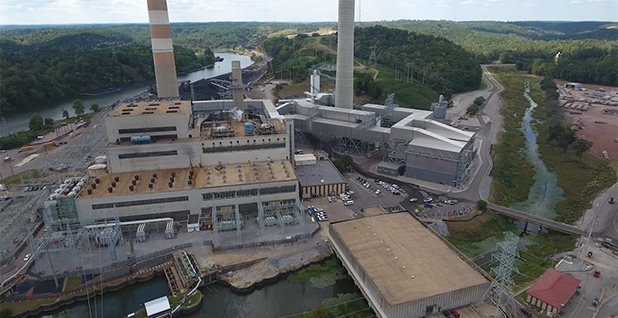 The last units at Alabama Power Co.'s coal-fired Plant Gorgas will close in April. The power plant had been providing electricity in some form for more than 100 years. Alabama Power

Operators of a century-old coal plant in Alabama say Obama-era environmental rules are behind their decision to close the facility, which first started churning out electricity in 1917.

The announcement is already fueling debate about the role of environmental rules in dampening the coal sector — despite President Trump’s pushback — versus an expected transformation to cleaner fuels throughout the nation’s power fleet.

Alabama Power Co. yesterday announced the last three coal stacks at Plant Gorgas will close April 15. The power plant — located in Parrish, Ala. — used to be known as the Warrior Reserve Steam Plant.

The utility said it would have cost $300 million to upgrade the aging plant to meet standards for coal ash disposal and steam plant discharges, among others. That would include installing dry ash handling and new wastewater treatment procedures at the plant, a spokesman said.

Alabama Power is also concerned more regulations are on the way.

"Federally driven environmental mandates related to coal, and the costs to comply with those mandates, are changing the way Alabama Power provides electricity to customers," the company said in a release.

And yet cheap natural gas, the falling cost of renewables and another directive from Alabama Power’s parent company also are shaping coal’s dimming future in the Yellowhammer State. The utility is owned by Atlanta-based Southern Co., which has been touting a goal to transition fully to a low- to no-carbon fleet by 2050.

Southern is one of several big energy companies in the Southeast with similar goals driven largely by economics. With the exception of North Carolina, there are no renewable energy standards in the region to speak of, and GOP-led states railed against the clean energy regulations that helped define the Obama administration.

Southern CEO Tom Fanning said in an interview on CNBC yesterday that utilities must not base their decisions on politics.

"We have to run our business independent of administration," he said. "What we have to do is argue for good policy no matter who is in the White House and who is in Congress."

Environmental groups and analysts appeared to diverge on the factors fueling the closure of the Gorgas plant yesterday.

Some suggested the plant, like other aging coal units, is being saddled with burdensome compliance costs. Others suggested it’s simply a sign of the times as the nation moves to cleaner fuels.

"Gorgas is apparently suffering the fate that so many older coal-fired power plants are facing in the way of higher environmental compliance costs as compared to other electric power sources," said Paul Patterson, a utility analyst with Glenrock Associates LLC.

One such rule crafted under the Obama administration aims to curb coal combustion residuals, or CCR. It sets requirements for safely disposing of coal ash, a waste product left over from burning coal that is typically stored in either landfills or pools.

Another is the Obama-era revised effluent rules that were finalized at the end of 2015. That rule controls steam power plant discharges into surface waters and aims to prevent contamination from toxic chemicals like arsenic, lead, mercury, selenium, chromium and cadmium (Greenwire, Sept. 17, 2018).

Stephen Stetson with the Sierra Club’s Beyond Coal campaign questioned why Alabama Power blamed the Obama administration for what has been an ongoing trend.

"It’s understandable that regulations have consequences," he said. "It seems like blaming instead of taking responsibility for modernizing your industry."

Like most electric companies, Alabama Power disclosed previously that it may be removing a certain amount of generation after reviewing its fleet. But it wasn’t until recently that the utility decided the Gorgas plant would be part of those closures.

Southern once got more than 70 percent of its electricity from coal, but today that figure has fallen below 30 percent. Alabama Power has a way to go: The amount of coal generation in its fleet stands at 47 percent.

Southern executives yesterday acknowledged where the utility stands but said it eventually will meet the companywide initiative.

"Alabama absolutely will see a transition of its fleet to a less carbon-intensive fleet," said Drew Evans, Southern’s chief financial officer, in an interview with E&E News.

Georgia Power Co., its neighbor to the east, has an electricity mix that mirrors that of Southern’s. The company’s newly filed long-term energy plan also calls for adding another gigawatt of solar to its renewable energy portfolio.

"Alabama will get there, but it’s not going to be this year," Evans said.

‘End of their useful lives’

"Plant Gorgas Units 8, 9 and 10 were some of Alabama Power’s oldest operating coal-fired units. They had reached the end of their useful lives," said Keith Johnston, managing attorney of the Birmingham office of the Southern Environmental Law Center.

"We’re glad that Alabama Power has finally made this decision, and we’re hopeful that the utility will continue to move to less polluting sources of power generation," Johnston added.

Alabama Power once got 80 percent of its electricity generation from coal. Closing Gorgas will remove another 1,000 megawatts of coal from its system, according to company disclosures.

It also cuts the number of operating coal units to seven. In 2015, that figure was 23. Economics and regulatory compliance costs played a key role in those closures, company spokesman Michael Sznajderman said.

The utility will file new long-term energy plans with state regulators later this year. The previous integrated resource plan did not call for Alabama Power to build any new generation through at least 2030.

Sznajderman said Alabama Power does expect to use less coal and more natural gas and renewables over time. New technologies and energy efficiency will play a role, as well, he said.