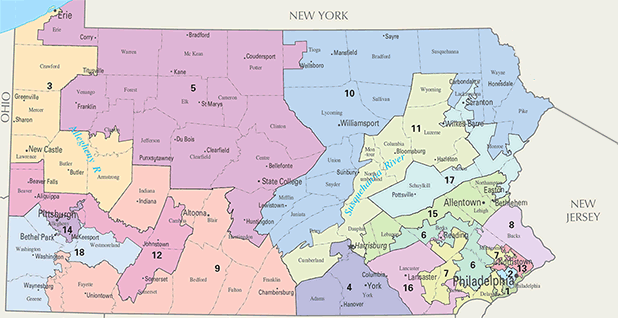 Pennsylvania will get a new congressional map. That’s the one constant in an equation packed with unknown variables.

It said the state’s congressional map, drawn in 2011, "clearly, plainly and palpably" violates the state constitution by unfairly benefiting the GOP and must be redrawn.

An analysis published last summer by the Associated Press found Republicans won approximately three more House seats in the 2016 election than expected, given the party share of the state vote.

A new map could improve Democratic chances in some of these districts, put even more pressure on GOP incumbents in the greater Philadelphia region and potentially loosen the GOP stranglehold on western Pennsylvania, a coal mining hub where natural gas development now dominates.

The map must be redrawn in time for the primaries in May. The state pushed back by a few weeks the candidate filing deadline. The March 13 special election in the 18th District will not be affected.

Republican leaders say the state court’s ruling is out of line and note five of the seven justices are Democrats.

"The Pennsylvania Supreme Court’s decision to legislate from the bench is dangerous to our democracy," said Pennsylvania GOP Chairman Val DiGiorgio in a statement.

"The majority justices are blatantly overstepping their constitutional authority in a partisan attempt to create more favorable maps for their Democratic Party," he said.

As it stands, the Republican state Legislature will have until tomorrow to create a new map and submit it to Democratic Gov. Tom Wolf, who, in turn, has until Feb. 15 to accept or veto.

A snowstorm did not help matters, cancelling votes yesterday. To complicate matters the Philadelphia Eagles Super Bowl victory parade is today and several area lawmakers say they want to attend.

State Senate Republican Leader Jake Corman would not guarantee on Monday that a map would be ready in time, and other GOP leaders have threatened additional legal action.

The state Supreme Court wants a new map in place by Feb. 19 and signaled it will draw its own map if necessary, hiring an outside expert, Nathaniel Persily of Stanford Law School.

The court released its full opinion explaining the gerrymander ruling late yesterday, more than two weeks after overturning the map.

Writing for the majority, Justice Debra McCloskey Todd argued the General Assembly’s 2011 map “interfere[d] to prevent the free exercise of the right of suffrage,” violating the state constitution’s guarantee that “elections shall be free and equal.”

Republican lawmakers had complained they were asked to draw a new map without an the official ruling on what part of the state Constitution the old map violated.

The full ruling adds little certainty that a new map will be done in time.

Most of the Pennsylvania redistricting talk has centered on urban centers in the eastern and central parts of the state: the jigsaw districts surrounding Philadelphia, as well as Harrisburg and Allentown.

The areas likely not in play are telling and evidence of the Democratic Party’s degradation in western Pennsylvania coal country.

Even with a new map, western and northwestern Pennsylvania would remain a formidable challenge for Democrats. This despite Democratic voter margins in many counties, a vestige of the mining and steel unions that once dominated the area.

Pennsylvania’s central and western congressional districts are almost uniformly red, with the exception of the Pittsburgh metro area. That population center offers the Democrats’ best chance of picking up another seat in the western part of the state.

The party already holds the 14th District, which includes the city proper. Adjoining the seat to the north and west is the 12th District, sometimes referred to as the "hammerhead."

The court ruling directive demands the new districts be contiguous and compact. Specifically, it states counties, cities, towns, boroughs, townships and wards should only be split to ensure population balance for a congressional seat.

The "hammerhead" touches six different counties. The court ruling requiring contiguous population centers could cut off the "head" of the shark in a new map, according to some redraw drafts by outside groups.

One such effort, by Dave Wasserman, U.S. House editor of the nonpartisan Cook Political Report, would give Democrats a chance at the 12th District seat, which is held by GOP Rep. Keith Rothfus.

But even that map, or something similar, would be a long shot. Formerly union-blue, western Pennsylvania has become one of the most vocal centers of Trump support in the nation.

The region was once the most prolific coal-producing area in the country, feeding Pittsburgh’s steel foundries, but the decline in U.S. coal jobs began in the 1980s and continues today. Western Pennsylvania’s economy has bottomed out, parched by the global economic trends driving manufacturing out of the U.S.

The aftertaste of mining pervades the region: orange streams full of sulfuric acid and heavy metals, toxic pits and more mine reclamation projects than any other state in the nation. Billions of federal dollars target the region for coal mine renewal projects.

In recent years, coal has given ground to a new natural resource industry in the Appalachian Basin: natural gas obtained by hydraulic fracturing and horizontal drilling.

The Marcellus Shale formation covers broad swaths of northeastern and western Pennsylvania. A drilling boom during the past 10 years puts Pennsylvania second, behind Texas, in natural gas production.

Western Pennsylvania voters rallied to President Trump’s promises to revive coal and steel industries, as well as his opposition to U.S. membership in the Trans-Pacific Partnership, NAFTA and the Paris climate deal.

These votes were key to Trump’s Pennsylvania victory, which he won by roughly 44,000 votes — less than a percentage point.

"These are people whose ancestors made a good living in industry," Madonna said. "Now many work in minimum and subminimum wage jobs, so when Trump talked about the trade deals and promised to bring back coal, bring back steel, and was a strong supporter of shale — that was a tremendous deal for them."

Asked whether a new Democratic district is possible in the Keystone State’s coal country, Madonna demurred.

"No one can predict what they are likely to do," he said, referring to state legislators. "We’re in a time of tremendous uncertainty."

However it might happen, a redrawn Pennsylvania congressional map would be enormously consequential, with the potential to affect who is the majority party of the U.S. House after the midterms.

Democrats need to pick up 24 seats in order to take control of the House, and Pennsylvania contains a handful of these crucial prospects. Six House districts will not have an incumbent in the fall, five of which are held today by a Republican.

No one knows what redrawn districts might look like, but new boundaries are bound to help Democrats.

"Let’s be blunt," said Saring, the GOP county leader. "It’s a Democrat-majority Supreme Court that ruled along party lines and a Democratic governor. Both are partisan. Both have to sign off. Clearly it’s going to be a more Democratic map."

Seven years ago, Madonna called the map "the worst gerrymander in modern Pennsylvania history," according to the Associated Press.

The numbers bear this out. Since 2011, Republicans have held a 13-to-5 congressional seat advantage. This despite Democrats holding an 800,000 voter advantage out of 8.4 million registered voters.

The party holds all three statewide offices. Before Trump’s 2016 win, the last Republican to win Pennsylvania at the presidential level was George H.W. Bush in 1988.

"The chance that more Pennsylvanians will have more of a voice in who represents them is a big deal," said McNeil.

The issue is particularly salient in the eastern part of the state, where long, thin districts around Philadelphia are often cited as paradigmatic examples of extreme partisan gerrymander.

Critics say the 7th District was drawn in 2011 to protect Republican Rep. Pat Meehan, who has comfortably won re-election since. He will not run this fall after reports emerged he was accused of sexually harassing a staffer.

The 6th and 8th districts are represented by Republicans Ryan Costello and Brian Fitzpatrick, respectively. Both as members of the Climate Solutions Caucus.

Those three seats and several more held by Republicans were already considered in play this fall. A redraw based on the court ruling that directs the new map to keep population centers — such as counties — contiguous when possible could make retaining these seats even more difficult.

Montgomery County, vital to the GOP hold of those three districts, has enough people to justify a district for itself. That also holds for Berks County, which is divvied up into four congressional districts, including the 6th and 7th.

Similar conditions in the northeastern region could put two GOP-held seats —the 15th and 16th districts — in danger this fall.

Local groups such as the Berks County Community Foundation and Greater Reading Chamber Alliance are advocating for Berks County to become a single congressional district.

Other local associations say the court and the subsequent chaos has upended their plans. Saring said his group had endorsements and organizing strategies ready to go. The county touches on five congressional districts.

"We are forced by this ruling to postpone our congressional endorsements to a date that is not certain, but obviously we need to know where these lines are," Saring said.