‘Pace has picked up’: Dems eye deal by week’s end 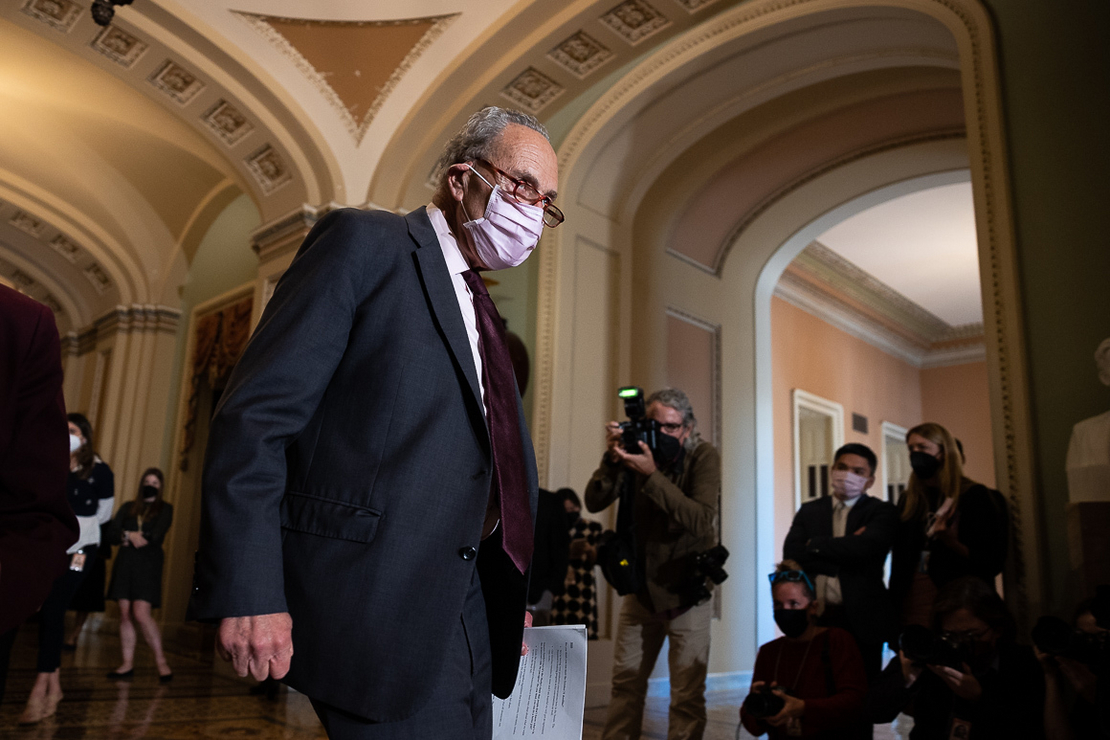 Top Democrats are looking to strike a broad agreement on a reconciliation bill in the coming days, but they’re no closer to consensus on climate policy.

After weeks of opposition from Senate Energy and Natural Resources Chair Joe Manchin (D-W.Va.), Democrats are increasingly acknowledging they may have to drop the proposed clean electricity performance program, or CEPP — currently the centerpiece of President Biden’s climate agenda — from their multi-trillion dollar package. But one of their proposed replacements, a price on carbon, isn’t fairing much better.

Manchin dug in against the CEPP again yesterday, saying, despite messaging by the president and the rest of his party, that it is “not a key part” of Biden’s climate plans.

“It really is not,” Manchin told reporters. “I know you think it might be, but the bottom line is, you pay $150 billion for what we’re going do anyway, and we can do it with tax credits, incentivize, and get innovation and creation.”

The West Virginia Democrat was similarly obstinate when asked about a carbon tax, telling reporters that the policy “is not on the board at all right now,” doubling down on a point he has made for months.

It paints a bleak picture for what environmentalists were hoping would be a generational climate bill, despite a flurry of meetings at the White House yesterday and Democrats’ insistence that they would reach a broad deal on reconciliation by the end of this week.

While Democratic lawmakers projected optimism about their climate promises, the reality is that two of their biggest proposals to slash greenhouse gas emissions are in danger, and it’s not clear how they plan to replace them.

Rep. Jared Huffman (D-Calif.) acknowledged that dynamic after he and other progressives met with Biden for roughly two hours yesterday afternoon. One possibility, Huffman said, is a CEPP carve-out for West Virginia.

“I would say it feels very unresolved,” Huffman told reporters. “I suggested a few things [to Biden]. One of them that seems rather obvious to me is if Sen. Manchin feels like this doesn’t work for West Virginia, give him a program for West Virginia that does, and let the rest of us reduce our greenhouse gas emissions.

The CEPP as currently conceived — a $150 billion program of payments for utilities that deploy a certain amount of clean energy each year — may be out, but progressives are still looking for a targeted climate policy for the power sector that goes beyond Manchin’s vague proposals to build out the grid and expand incentives for carbon capture.

Sen. Tina Smith (D-Minn.), a top CEPP advocate who has been involved in negotiations with the White House and party leaders, said Democrats are actively working on finding “alternatives” to the CEPP in the face of Manchin’s opposition.

“The clean electricity plan continues to be the best, most efficient way of moving the power sector to clean, and getting the emissions reductions we need,” Smith said. “If that doesn’t end up being in the final package, then you’ve got to find other ways of accomplishing that.”

Senate Finance Chairman Ron Wyden (D-Ore.) and other prominent carbon tax advocates on Capitol Hill are hoping a price on carbon could help fill that gap.

Sen. Chris Coons (D-Del.), who is close to Biden, said there were plenty of measures to consider that could add up to making the reconciliation bill “bold” on climate. He listed, as examples, a “wide range of tax rebates,” the Civilian Climate Corps, a border carbon adjustment and a polluter fee.

Even beyond Manchin’s objections, however, Democrats aren’t sure carbon pricing has 218 votes in the narrowly divided House, much less all 50 Democrats in the Senate, given that Wyden has not put a specific proposal on the table.

And while expansions of clean energy tax credits generally have wider support than either the CEPP or carbon pricing, climate hawks insist that simply would not be enough to decarbonize the power sector and meet Biden’s pledge to reduce emissions 50 to 52 percent under 2005 levels by 2050.

Wyden has called his broad energy tax overhaul the “linchpin” of Democrats’ climate efforts in recent days, but he is also still at odds on the issue with House Ways and Means Chair Richard Neal (D-Mass.), who wrote his own reconciliation package that would expand and extend existing credits (E&E Daily, Oct. 6).

“Sen. Manchin has said, as you can see, that he’s not into the Clean Electricity Payment Plan,” Smith said in an interview. “But be that as it may, it remains the centerpiece of the president’s package. They haven’t taken it off the table, nor should they.”

Others had a different assessment after huddling with Biden yesterday. Rep. Ro Khanna (D-Calif.) said after meeting at the White House with other progressives that the CEPP “is probably not going to be in the bill.”

“That is a disappointment,” Khanna said on CNN. “But the president said he is committed to finding alternative means to get to the 50 percent reduction in emissions that he is committed to and making sure that he delivers that before he goes to Glasgow, so that is a work in process.” Khanna said progressives expected to see “$300 billion of investments in solar, in wind, in hydro,” along with “the tax credits to be able to develop that.”

Huffman, for his part, said he was not aware of a specific proposal to spend $300 billion. But either way, he added, it’s also not enough to simply fund clean energy technology and hope it works.

“The main point is you’ve got to get those power sector emission reductions,” Huffman said. “You can’t just throw money over into things that Joe Manchin likes, like carbon capture, and pretend that it reduces emissions in the power sector between now and the end of the decade. It doesn’t, and no amount of spinning and hand waving will convince anyone that it does.”

‘The pace has picked up’

The goal for now, according to Democrats, is to strike an agreement on a framework for a reconciliation bill with a topline around $2 trillion — down from the $3.5 trillion package initially spelled out in the budget resolution — in the coming days, potentially by the end of this week.

House Progressive Chair Pramila Jayapal (D-Wash.) told reporters after meeting with Biden that the president “has consistently laid out a number that is somewhere between 1.9 and 2.2.”

“It’s not the number that we want. We have consistently tried to make it as high as possible,” Jayapal said. “But at the end of the day, the idea that we can do these programs, a multitude of programs, and actually get them going so that they deliver immediate transformational benefits to people is what we’re focused on.”

A deal this week almost certainly would not mean bill text. But lawmakers said they were hoping for an agreement that gives Biden something to bring to United Nations climate talks and potentially move forward with the linked bipartisan infrastructure bill, which, among other things, would reauthorize surface transportation programs operating on a temporary extension until Oct. 31.

To that end, Senate Democrats emerged from their weekly caucus lunch painting an optimistic picture of talks, and the party had one of its busiest public days of negotiating. In addition to the White House meeting with House progressives, Biden met with moderates from both sides of Capitol Hill, and Manchin huddled privately with Senate Budget Chair Bernie Sanders (I-Vt.) for the second time this week.

Democrats are also getting pressure from the corporate and environmental advocacy communities. Four graduates burned their diplomas outside the White House to urge Biden to keep the CEPP in the reconciliation package, a metaphorical effort to prevent Democrats from burning their future.

Senate Majority Leader Chuck Schumer (D-N.Y.) said Democrats are getting “closer” to a deal that would ultimately allow them to move both the reconciliation package and the Senate-passed bipartisan infrastructure bill.

“The pace has picked up,” Schumer told reporters. “The desire to get it done is strong.”

Smith said the idea for the framework was to produce something that is “agreed to with enough specificity that people aren’t going to be surprised by the bill language.”

Trimming the topline will no doubt mean cuts, but Democrats are still grappling with whether to hack off entire programs, lower spending across the board or even shorten the length of individual programs from 10 to five years.

Some Democratic senators cautioned, in short, that negotiations take time. “Nothing is decided until it’s decided, so let’s not paint Sen. Manchin into any corners,” said Sen. Sheldon Whitehouse (D-R.I.).

Manchin at one point yesterday seemed to acknowledge his role as one of the few arbiters of what makes it in the reconciliation bill.

“The more I talk, the more everyone gets pissed off,” he said when approached by reporters. “So I’m going to quit talking.”