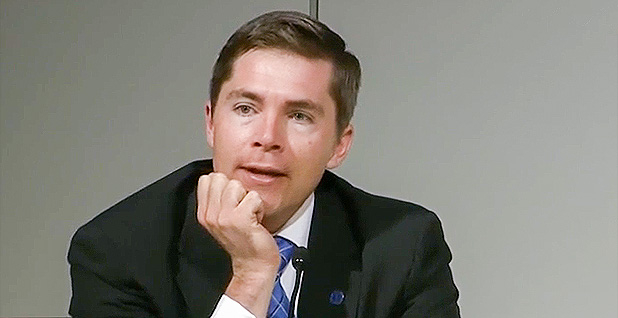 The White House yesterday announced 10 nominees for open seats in several federal courts, including a conservative lawyer with broad experience in water and endangered species law.

"These 10 individuals that the president has chosen were chosen for their deep knowledge of the law and their commitment to upholding constitutional principles," White House spokesman Sean Spicer said.

Yesterday’s nominees represent Trump’s first major move to shift lower courts in a more conservative direction and follow the successful confirmation of Justice Neil Gorsuch to the Supreme Court. The nominees range in age from their 30s to their late 50s — meaning most could have long tenures on the bench if confirmed.

Before the announcement, Trump had nominated one other person to serve on an appellate court: Judge Amul Thapar for the 6th U.S. Circuit Court of Appeals, which often hears environmental cases (Greenwire, March 21). His nomination is still pending before the Senate Judiciary Committee.

The nominees are among the first of what could be many opportunities for Trump to fill lower-court positions with conservatives. There are currently 129 vacancies in the federal judiciary, as the Senate has not confirmed an appellate court nominee since January 2016 or a district court nominee since July 2016.

On the other hand, progressive groups said they were concerned that the nominees would favor corporate interests and far-right social and economic policies.

"We urge senators to use extreme caution and fully vet the backgrounds of the judicial nominees announced by President Trump today," said Wade Henderson, president and CEO of the Leadership Conference on Civil and Human Rights. "He must not be allowed to fill critical circuit court vacancies with ultra-conservative, right-wing judges."

Schiff has been on staff at the conservative Pacific Legal Foundation for 13 years, where he’s been a critic of an expansive reading of both the Clean Water Act and Endangered Species Act.

In 2012, he represented Mike and Chantell Sackett of Priest Lake, Idaho, in their winning case in front of the Supreme Court.

In the case, the court ruled unanimously that property owners facing potential enforcement actions under the Clean Water Act can seek judicial review before being forced to comply. U.S. EPA had claimed that the couple were in violation of the law because they filled in wetlands on their land without obtaining a permit.

Schiff has also been a critic of the Obama administration’s Clean Water Rule, last year testifying in front of a Senate subcommittee that the rule was an illegal expansion of the reach of the Clean Water Act (E&E Daily, May 25, 2016).

He also previously represented homebuilders in a challenge in the 9th U.S. Circuit Court of Appeals to an Obama administration decision to designate critical habitat for 15 protected species. The court upheld the designation.

Schiff is a former law clerk to Judge Victor Wolski of the Court of Federal Claims.

Among yesterday’s nominees for open federal appellate seats are two state justices who made Trump’s list of potential candidates for the Supreme Court seat that had belonged to the late Justice Antonin Scalia until Gorsuch was nominated and confirmed.

Larsen is a former University of Michigan Law School professor who clerked for Judge David Sentelle on the D.C. Circuit and for Scalia on the Supreme Court. She also worked at the law firm Sidley Austin and was deputy assistant attorney general in the Department of Justice Office of Legal Counsel.

Stras is on the faculty of the University of Minnesota Law School and clerked for Justice Clarence Thomas on the Supreme Court. He was appointed to the Minnesota court by former Republican Gov. Tim Pawlenty.

Trump also nominated Amy Coney Barrett, a professor at Notre Dame Law School who clerked for Scalia on the Supreme Court and Senior Judge Laurence Silberman on the D.C. Circuit, to serve on the 7th Circuit. Before becoming a law professor, Barrett was an associate at private firm Baker Botts LLP.

Rounding out the appellate nominations is Kevin Newsom to serve on the 11th Circuit. Currently a partner at Alabama-based Bradley Arant Boult Cummings LLP, Newsom was formerly the solicitor general for Alabama and an associate at the D.C. office of Covington & Burling. Newsome was a clerk for former Supreme Court Justice David Souter.

Trump nominated Dabney Friedrich, who was a member of the U.S. Sentencing Commission until 2016, for one of four vacant seats in the U.S. District Court for the District of Columbia. Friedrich also formerly served as associate counsel for President George W. Bush, assistant U.S. attorney for the Eastern District of Virginia and as a counsel to Sen. Orrin Hatch (R-Utah) when he was chairman of the Senate Judiciary Committee.

Trump also tapped Magistrate Judge Terry Moorer of the Middle District of Alabama to become a judge on that same court. From 1990 to 2007, Moorer served as an assistant U.S. attorney in the district.

David Nye, a state judge in Idaho, is Trump’s nominee for the vacant seat in the Idaho district court. Nye was previously nominated for the same seat by President Obama but never received a vote in front of the full Senate.

For the Western District of Oklahoma, Trump nominated Scott Palk, an assistant dean at the University of Oklahoma College of Law. Like Nye, Palk is a former Obama nominee who never received a vote in the Senate.

As of last night, Trump had formally sent eight of the 10 nominations to the Senate; Moorer and Friedrich were the exceptions.

At his daily press conference, Spicer yesterday defended the pace of nominations of not only judges but other key positions in the administration, saying the White House has done a "great job" in rolling out nominees.

"I think we’re well on pace with where previous administrations have been," he said.