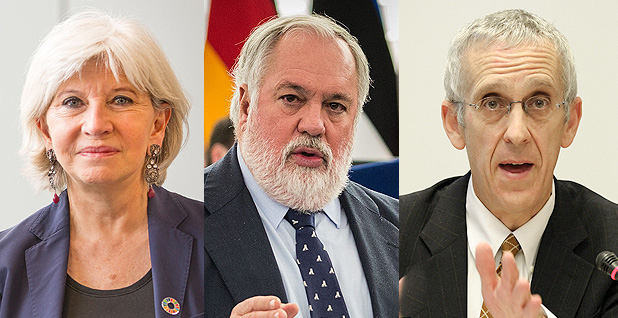 One of the top architects of the Paris climate deal says President Trump can’t offer a less ambitious target than his predecessor did, an opinion that buttresses the views of opponents to Paris in the White House.

Laurence Tubiana, France’s climate ambassador during the 2015 summit that produced the agreement, gave Trump no quarter in an interview with E&E News yesterday, reading a controversial provision to say Trump must keep the U.S. target or tighten it. That scenario would likely be seen among presidential advisers as a reason to withdraw from the global pact.

"The sense of the direction is really progress; it’s not going backwards," she said.

Tubiana’s view tracks with anti-Paris hard-liners in the White House, who warn that NDCs, once issued, are effectively legally binding and cannot be revised except to be more ambitious. Environmental lawyers and the U.S. architects of the Paris deal dispute that interpretation. Trump aides who favor remaining in Paris have suggested issuing laxer commitments.

Tubiana acknowledges that if a country walks away from a prior target, "you don’t have any judge to punish you," but the Pruitt-Bannon camp argues that domestic environmental litigants could cite the Paris deal and former President Obama’s commitment to cut emissions 26 to 28 percent compared with 2005 levels by 2025 when they challenge Trump deregulatory actions in court.

"There is a remedy," Marlo Lewis, a senior fellow at the Competitive Enterprise Institute, said in a blog post yesterday. "The U.S. government cannot join a pact affirming the moral necessity for ‘ambitious’ emission reductions without inviting climate tort and regulatory litigation."

Tubiana, meanwhile, dismissed an exit from Paris as a "very, very bad thing" for the United States, adding that she couldn’t decide whether a new NDC or a Paris exit would be preferable.

"It’s not just a diplomatic exercise," she said. "If you consider Paris as a diplomatic success, in my view it’s just not the case. The importance of the Paris Agreement was to be a framework for many, many actions to take place, and giving a sense of common objectives."

Allowing the United States to change its target for political reasons, she said, would encourage other countries to follow suit and would damage the deal’s signal to the broader global economy.

Tubiana’s views stand in stark contrast to those expressed by Obama’s former special envoy for climate change, Todd Stern, who said in an interview with E&E News last week that the United States painstakingly negotiated language in advance of Paris to allow countries to modify their commitments in either direction. While Tubiana said backtracking would imperil the deal, Stern said it would ensure its longevity (Climatewire, May 1).

An international source closely involved in the negotiations, who faced off with the United States on this issue during the 2013 climate talks in Warsaw, Poland, said he was glad Stern’s team kept that more prescriptive language out of the text.

That source and others say the more permissive language — which centers on the word "may," instead of "shall" — is partly to thank for the more than 170 countries that have now offered their NDCs. It helped them feel confident that if they fell short, they wouldn’t be penalized.

But while those sources were unwilling to go on the record for fear of seeming to excuse diminishing U.S. ambition, opponents of that view were less circumspect. Former Indian Minister of Environment Jairam Ramesh’s reading of Article 4.11 and 4.3 — which states that each pledge "will represent a progression beyond" the previous one — is more in line with Tubiana’s.

"I think any further negotiations will get vitiated by unilateral U.S. action," he added. "I don’t expect China and India to follow the U.S. example, since both countries will aspire to assume the leadership mantle."

But it’s not clear if that would track with Trump’s domestic goals. Analysis shows that Obama-era regulations would have fallen short of his 2025 target. Now, with policies like EPA’s Clean Power Plan on the chopping block, that gulf will widen. Trump administration officials who favor remaining in Paris have suggested a weakened NDC that reflects business as usual.

"For years and years, we’ve been trying to get other countries into agreement, and if you kind of create this clear signal that it’s OK to weaken your targets and there will be no blowback, that’s another story," he said. But he acknowledged that there are no penalties in the Paris Agreement.

"They want to make it look like the U.S. legally has to leave, or otherwise it won’t be able to weaken its target," he said. "And I think that’s legally incorrect."

He called the Article 4.11 language intentionally "wishy-washy" and expressed surprise that the White House counsel’s office could think it obligates the United States legally.

In a Twitter exchange today, in response to this article, Tubiana said the United States’ obligation to stay the course is politically binding, though not legally required.