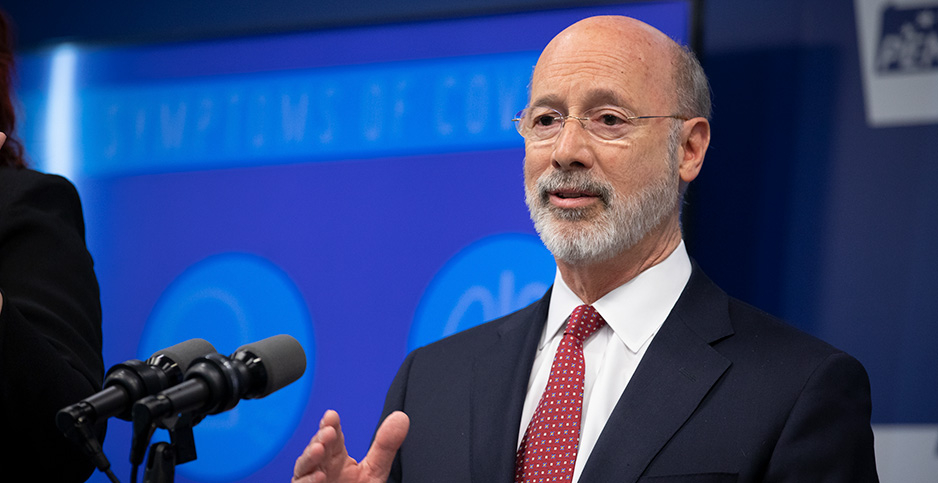 Pennsylvania Gov. Tom Wolf (D). Lockdown orders issued by Wolf in response to the coronavirus pandemic were the subject of a lawsuit that legal experts said could affect climate law. Wolf/Flickr

Struggling business owners across the country are turning to the courts to get governments to pay up for forcing them to close during the coronavirus pandemic.

Lawsuits by tobacco stores, golf course owners and others seeking compensation for takings of their property are likely to fail, legal experts say, but the challenges could serve as important indicators of how courts might view similar claims related to another slower-moving disaster — climate change.

"Climate attorneys should be very concerned because it would set a precedent for rejection of the government actions that will be required to address the climate crisis," she wrote in an email.

Lawyers focused on climate cases may not have much to worry about in the likely event that courts scrap claims stemming from pandemic-related closures, Bronin noted. But should disgruntled business owners prevail, she believes governments could be on the hook for a lot more money during disasters.

There’s a minuscule chance the coronavirus cases could make it far enough to open up opportunities to challenge Supreme Court precedent on takings law, but legal victory by a business hurt by the current public health crisis could pose a threat to climate resiliency, said Vermont Law School professor John Echeverria.

"If the plaintiffs in any of the COVID takings cases succeeded," he said, "it would have a chilling effect on government regulatory activity to address climate change and a host of other threats."

In Pennsylvania, a candidate for state Senate launched an unsuccessful challenge against the governor for issuing stay-at-home orders that halted campaign rallies and other activities that might lead people to congregate and potentially spread COVID-19.

The complaint lodged by Danny DeVito — the political hopeful, not the actor — and a set of small businesses contended that Gov. Tom Wolf’s (D) order violated their Fifth Amendment rights when it halted economic use of their property.

They were ultimately unsuccessful, but some legal experts say a minority opinion in the case could end up informing future climate resiliency claims.

"Greater account must be given to the specific nature of the exercise, and … arbitrariness cannot be tolerated, particularly when the livelihoods of citizens are being impaired to the degree presently asserted," Pennsylvania Supreme Court Chief Justice Thomas Saylor wrote in his dissent.

He maintained that though the government did what was necessary in the face of disaster, the individual plights of the business owners should have been more carefully examined before a complete shutdown. Three of the court’s seven justices said the decision to scrap the business owners’ takings claims needed an additional look.

Though it came in the form of a dissent, he said, Saylor’s language could eventually affect whether climate-response efforts make it off the ground, especially if a project — like a sea wall — helps one property owner while hindering another.

"There may actually be resiliency efforts … deemed arbitrary and inconsistent," Weaver said. "Necessary — arguably — at the time, but in their execution illegally arbitrary and capricious for which there’d be compensation or injunction."

Echeverria said he expects the "whole flurry" of COVID-19 takings cases to eventually fail and die down, partly because business owners won’t be able to convince judges that government shutdown orders resulted in permanent damage.

There is a strong body of case law defining the limits of property owners’ rights to compensation for government takings, Echeverria wrote in a recent blog post for the Center for Progressive Reform.

In the 2002 Supreme Court case Tahoe-Sierra Preservation Council Inc. v. Tahoe Regional Planning Agency, the justices quashed a plea by real estate owners for payment after implementation of a comprehensive land use plan temporarily halted development. The high court rejected their claims, finding that property values would rise again after the moratorium was lifted.

"Applying the teaching of Tahoe-Sierra to the coronavirus takings cases, the claims should fail because they are based on stop-gap measures which, by design, are temporary," Echeverria wrote.

Governments won’t have the luxury of that argument in the climate change context, which will likely result in permanent restrictions on building and rebuilding in coastal areas, he added.

Because the economic and physical fallout from the coronavirus pandemic is so immediately obvious, Frank said he believes the application of law is more predictable in those cases. The consequences of climate change, however, are still slowly and steadily coming to light.

Climate change is "kind of the brave new world of takings law," said Frank. "The various impacts of climate change are really going to test takings law and private property rights in this country, and that application is far more unsettled and unpredictable."