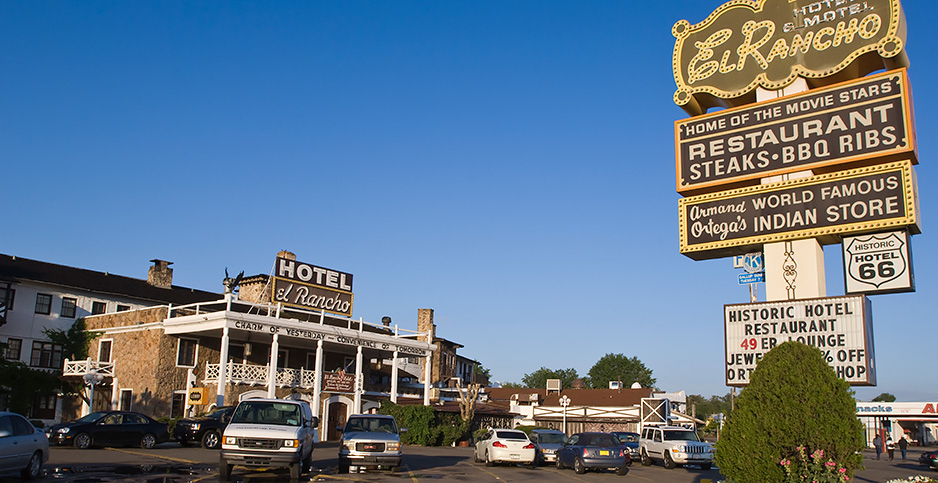 Gallup, N.M., a stop along historic Route 66, is coping with the loss of a refinery that was one of the area's major employers. Michael DeFreitas Danita Delimont Photography/Newscom

The future of the oil and gas industry arrived suddenly in Gallup, N.M.

Marathon Petroleum Corp. announced in August it was closing its 27,000-barrel oil refinery just outside the small town in northwestern New Mexico. More than 200 full-time workers and dozens of contractors are expected to lose their jobs this fall.

That could have a lasting effect in Gallup, which has a population of about 22,000. The refinery was a big contributor to local charities, and the good-paying jobs helped support restaurants and businesses in the town’s historic business district on Route 66. Marathon is already offering to relocate some of its workers.

"I know we are seeing a lot of people flat-out leaving," said Jennifer Lazarz, a spokeswoman for the city of Gallup.

In the last three months, six U.S. refineries — representing a little less than 3% of total U.S. refining capacity — have announced they’re shutting down or converting to alternative fuels, affecting communities from California to Louisiana.

And others may be on the verge of closing, through either corporate cutbacks or bankruptcy, experts say, as the coronavirus pandemic and the ongoing shift away from fossil fuels make some of the plants obsolete. Last week, California Gov. Gavin Newsom (D) signed an order banning gasoline-powered car sales by 2035 in the country’s most populous state (Climatewire, Sept. 24).

Those closures leave the surrounding cities, counties and states with a host of questions: what to do about the lost jobs, how to prevent pollution during and after the shutdown, what to do with the newly idled sites. So far, local and state governments say they don’t have a lot of answers — and with a few exceptions, they haven’t had a chance to plan.

The Gallup refinery, about 40 miles from the New Mexico-Arizona border, is typical of the refineries that are closing. It’s far from the major oil pipeline and petrochemical centers in the Midwest and on the coasts. It had a midlevel complexity rating, meaning it could handle only a small variety of crude oil types, and it produced only a handful of products like gasoline and diesel.

Increasingly, the industry is turning to plants that can process everything from sweet West Texas oil to Canadian bitumen that’s the consistency of tar. And it’s looking to integrate refineries with petrochemical plants that produce precursors for plastics and other consumer products, which oil companies hope will stave off the decline in demand for gasoline and diesel fuel.

Those trends were developing even before the coronavirus pandemic struck, and they’ve accelerated over the last few months. Most major oil companies were expecting oil demand to decline sometime in the future. Several of them now say the peak will come faster, and at least one, BP PLC, has said demand may have already peaked.

"The outlook for refining in the next couple of years is pretty bleak," said Alan Gelder, vice president of refining at the consulting firm Wood Mackenzie.

"We lost, we think, two years of demand growth."

The shake-up will likely lead to other closures, particularly on the East Coast, where refineries often must purchase imported oil at higher prices, Gelder and his colleague Marc Amons said in an interview.

The companies say they’re working to cushion the local communities. Phillips 66 Co., which is preparing to close one plant in California and convert an additional one to renewable fuels, said it’s been working on the decision for a year. And the shutdowns won’t happen until 2023.

Marathon said it’s trying to relocate employees from its refineries in Gallup and Martinez, Calif., to other locations.

"Our decision on Martinez and Gallup was difficult and not taken lightly, and we know it will affect many," company spokesman Jamal Kheiry said in an email.

Just in California, refining will have to fall 4% to 7% a year to meet the state’s greenhouse gas reduction goals, Karras wrote in a report sponsored by Communities for a Better Environment. Waiting until 2025 would require cuts ranging from 20% to 80% a year, the report says.

A gradual drop will allow local governments — and the oil companies — to reduce the shock of job losses and the decline in local taxes.

Local and state governments also need to plan for cleaning up pollution as refinery sites close, perhaps by requiring companies to post financial assurance, he said.

Companies have announced they are closing or converting at least six refineries since the beginning of June. Here’s a look at the sites and the impact.

Several European countries have begun issuing specialized "green" bonds to fund projects tied to the energy transition, said Mark Alan Hughes, a professor at the University of Pennsylvania’s Kleinman Center for Energy Policy. But those haven’t been widely tried in the U.S., Hughes said.

Connecticut and a few other states have set up "green banks" to encourage private-sector energy transition loans. But they’ve stuck to small-scale projects like rooftop solar (Energywire, Aug. 28).

The worst-case scenario is bankruptcy, Hughes said in an interview. The court system is primarily focused on liquidating a company’s assets, and it can’t typically consider environmental questions or the impact on the surrounding community.

"No one would nominate a bankruptcy as a good public policy forum," Hughes said.

The worst-case scenario for an aging refinery may be playing out in Philadelphia.

The 150-year-old Philadelphia Energy Solutions refinery exploded in a series of fireballs in 2019, and its owners declared bankruptcy a month later. That left the city coping with a brownfield site the size of its downtown business district, along with a complicated environmental cleanup that had been going on for years (Energywire, July 1, 2019).

The surrounding neighborhoods, whose residents are mostly Black and low-income, had complained for decades about air pollution from the refinery. They pressured the city to convert some of the refinery land to a park or nature preserve, but the city had no leverage.

"It’s a privately owned site, the developer is at liberty to develop according to the zoning," Jamila Davis, a spokeswoman for the city planning department, said in an email.

The new owners of the site, Chicago-based Hilco Global, announced a plan to build warehouses there. Most of the contaminated soil would be left in place and sealed under concrete.

Parts of the plan, including the cleanup, don’t sit well with surrounding residents. Pushback from community groups prompted the local school board to initially reject tax breaks for Hilco’s project — a move the board reversed last week.

Mark Clincy, who lives near the site in South Philadelphia, said residents in the surrounding neighborhood plan to keep up pressure on Hilco and local governments. He’s part of a grassroots group, Philly Thrive, that is pushing for a more in-depth environmental cleanup and community involvement in the redevelopment plan.

"You can’t bury all that gunk underneath concrete," said Clincy. "The bottom line, we have other ideas. You’re going to have to listen to the community."

The refining industry says regulations have made refining less profitable too. Both the federal renewable fuel standard and California’s low-carbon fuel standard, which has been adopted by several other states, have raised costs and lowered demand for fuel.

Two refineries that announced closures or conversions — Phillips 66’s in Rodeo, Calif., and HollyFrontier Corp.’s in Cheyenne, Wyo. — said they were changing their operations to produce renewable fuels, and Marathon is considering producing renewable diesel at its recently idled Martinez site. The moves would bring the loss of several hundred jobs in California.

"During a time of substantial demand loss from COVID-19, there is no doubt that the Renewable Fuel Standard is imposing untenable compliance costs — some five times higher than just nine months ago," American Fuel and Petrochemical Manufacturers said in a statement.

John Gioia, an elected supervisor in California’s Contra Costa County, said the state’s low-carbon fuel standard helped prevent even more job losses. Both the Marathon and Phillips 66 refineries are in his county outside San Francisco, and he said converting them to produce renewable fuels will retain some workers and create construction jobs during the conversion.

"I think we’re going to see more of this — what we see is a shift to new technologies and new types of facilities," Gioia said.

California Rep. Mark DeSaulnier (D), whose district includes the Martinez refinery, said in an interview that policymakers in California have been discussing the employment impact of the state’s regulations for decades.

"How do we talk about these changes in a way that is protective of what are very good-paying jobs?" DeSaulnier said.

Refinery towns like Gallup may be able to learn from other communities that have had to cope with the loss of coal mines and coal-fired power plants, said Jack Morgan, a program manager who works on economic development and resilience at the National Association of Counties.

Local governments have to muster all their assets — schools, businesses, nonprofit groups — and come up with a strategy that fits their regions. Ideally, communities could prepare for a plant closure the way they prepare for a natural disaster.

"This is going to be a long haul — you’re not going to be able to get all the jobs back at once," Morgan said.

New Mexico, though, is one of the poorest states in the country, ranking 47th among the 50 states in terms of median household income. And its state budget has waxed and waned along with the oil business.

State environmental officials already had a tight budget, and they’re now having to pull staff from other areas to assess the impact of the refinery’s shutdown, including air emissions and wastewater. The state is still evaluating how much financial assurance it wants to ask from Marathon, James Kenney, head of the New Mexico Environment Department, said in an interview.

"For me to put people on the closing of a refinery, I have to pull people from other key projects in the state of New Mexico," he said.

Gallup and surrounding McKinley County, though, are among the most impoverished communities in New Mexico, and the region was hit hard by the pandemic.

Democratic Gov. Michelle Lujan Grisham issued an order in early May closing all roads leading into Gallup and dispatched the state police and National Guard troops to enforce it, citing the need to contain the virus.

Losing the refinery jobs, some of which paid more than $60,000 a year, is a big blow, said Bill Lee, a county commissioner who’s also head of the Gallup-McKinley County Chamber of Commerce.

Local officials in Gallup are looking at tax incentives and other ideas, such as alternative fuels, to convince Marathon to reopen the plant, Patty Lundstrom, a state legislator who leads the Greater Gallup Economic Development Corp., said in an interview.

"I’m going to do everything in my power to keep them going," she said.