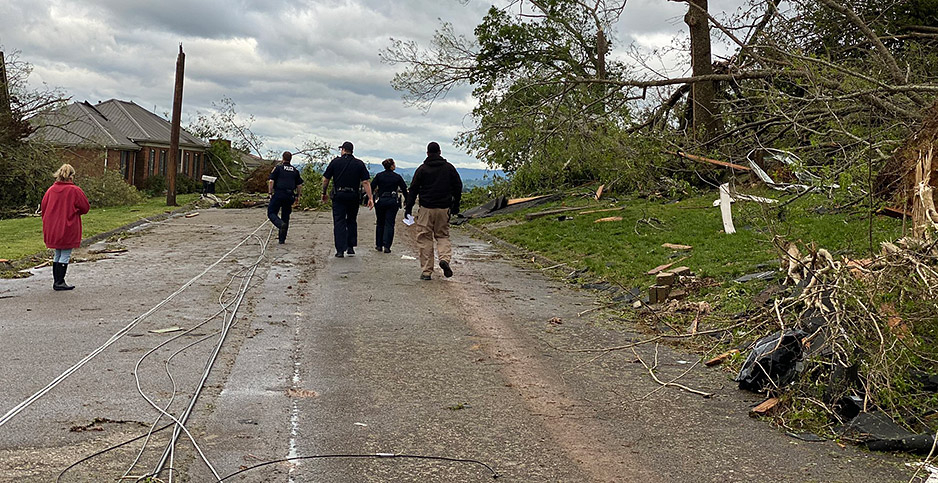 Utility crews are facing the unprecedented challenge of trying to restore power during a pandemic after violent storms tore through the South and up the East Coast.

Powerful systems that sparked floods and multiple tornadoes ripped through the South on Easter Sunday, leaving more than 30 people dead. The havoc left a trail of broken power poles and tangled wires, and more than 1 million homes and businesses without power.

That crews would be following ever-evolving safety protocols so as to not get sick or spread the coronavirus has added a layer of complexity to an already difficult job. Electric companies on Sunday and yesterday warned the extensive damage would warrant a multiday effort to get the lights back on.

"Due to the additional efforts we must take due to the COVID-19 pandemic and the significant and widespread outages, restoration times may be extended," Entergy Corp. said in a news release.

New Orleans-based Entergy’s territory spans some of the hardest-hit areas, including parts of Arkansas, Louisiana, Mississippi and Texas. The damage in Arkansas, according to the company, rivals that of back-to-back ice storms in 2000.

"Assessment could take up to three days and could be affected by our ongoing COVID-19 response," Entergy said.

The storms are adding insult to injury in the South. The region is mostly rural and has a disproportionate number of poor people who have underlying health problems. Access to health care can be a struggle, and many rural hospitals have shut down in recent years.

The region is also dominated by Republican governors and has lagged in implementing guidelines such as statewide shelter-in-place orders to help people limit contact with others.

The CDC has recommended people take extensive precautions such as frequently washing hands, wearing protective face masks and maintaining a distance of 6 feet from others to prevent getting sick or spreading the virus.

That’s difficult to do for workers who must be outside, usually traveling and operating in teams, to restore a critical service.

"There are certain jobs, by the nature of them, that require close contact. You just can’t get away from that," said Ryan Mosier, a spokesman for Duke Energy Corp., whose entire North and South Carolina territory got hit by bad weather on Sunday and into yesterday.

An example Mosier gave is replacing and setting poles, something that each electric company will be doing several times this week.

Duke Energy has briefed crews on safety measures, given them necessary equipment to safely work and asked them to be extra vigilant, Mosier said.

There is the additional challenge of making sure crews are fed and have safe places to rest after working long hours. Typically that’s done in tent cities or hotels where they can eat and gather in groups, but the coronavirus is making that difficult.

Any crews brought in from the outside will be staying in single-occupancy rooms, he said. Hotels have been accommodating, he said.

But "it is not always possible for crew members to maintain social distancing and still safely conduct the critical work that needs to be done to restore power following severe storm damage," he said.

Three waves of storms hit Southwestern Electric Power Co.’s (SWEPCO) territory Sunday, knocking out power to tens of thousands in Texas, Louisiana and Arkansas. There were roughly 22,000 outages on Sunday morning, but that figure grew to 64,000 by nightfall, even with efforts to get the lights back on during the day.

SWEPCO, owned by Columbus, Ohio’s American Electric Power Co. Inc., called on two of its sister utilities to help repair the power grid and restore electricity. What’s known as "mutual assistance" is a long-standing backbone of the utility industry. Doing so in the middle of a pandemic provides an extra layer of challenges.

"We continue to strongly emphasize physical distancing and other changes to our operations so that we can stay healthy and restore power to our customers as safely and quickly as possible," Peter Main, a spokesman for SWEPCO, said in a statement.

The industry has publicly asked people to keep their distance and let workers do their jobs, whether it’s regular maintenance or after a natural disaster such as this one.

"Please also know their work is essential to our ability to deliver safe, reliable energy, and that electric companies have taken steps to ensure their crews are operating safely in the field," the Edison Electric Institute said in a statement released Friday.

Individual electric companies have issued their own separate or joint pleas for people to maintain their distance.

The Tennessee Valley Authority reported almost 6 inches of rain in its northern Alabama and Georgia territories. The amount of rain that fell across its seven-state territory in 18 hours was more than the public utility typically gets in one month, officials said yesterday.

EPB in Chattanooga, Tenn., said it may take up to a week to 10 days to fully restore power across its system. Roughly 60,000 of its 180,000 residents and businesses lost power. EPB was able to cut that figure to 50,000 yesterday.

"We’re still at the very beginning of this, and it’s big," said J.Ed. Marston, vice president of marketing for EPB, the city’s electric distribution and telecommunications company.

The storm damage was so extreme that it affected EPB’s advanced smart grid system, a fiber optic network that connects the utility to customers’ smart meters. The fiber optic cables are strung on utility poles with power lines or may be underground in some cases.

The direct feed from the utility to the smart meters helps pinpoint damage and speeds power restoration, Marston told E&E News. In some cases, it has cut the number and duration of outages in half.

That wasn’t the case this time, he said.

"Portions of the network are so badly damaged there’s not a lot we can do" with the smart grid technology, he said.