Pandemic ends offsets boom. Is a bust in the offing? 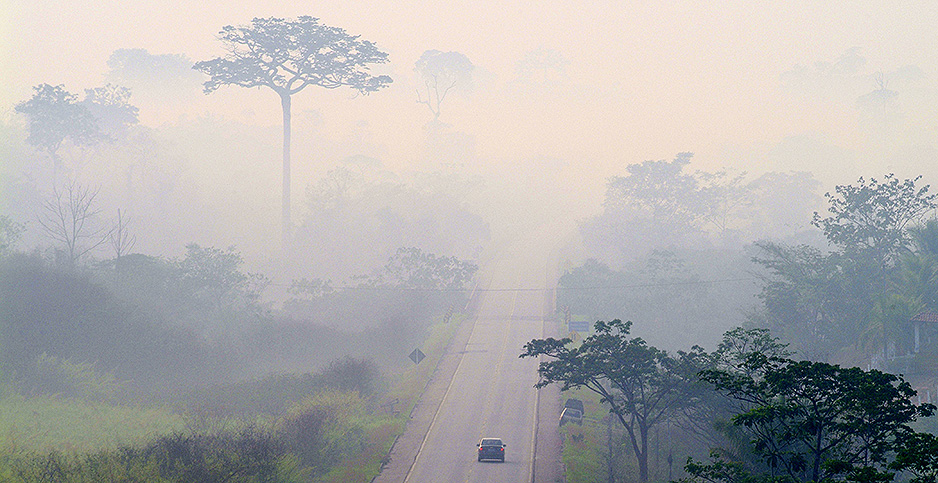 Smoke blankets a road through the Brazilian Amazon in this 2018 file photo. Analysts are watching whether the coronavirus pandemic will threaten carbon offsets markets and put at risk certain forest protection projects. P&R Fotos/agefotostock/Newscom

At the end of last year, the market for projects to prevent carbon dioxide emissions was booming. The growing demand for the carbon offset credits such projects produced was driven by companies and consumers that — due to regulations or virtue — sought to balance their pollution by preventing emissions elsewhere.

Then the novel coronavirus spread across the globe, parking cars, planes and cruise ships. It also shuttered many industrial facilities, battering balance sheets and causing carbon emissions to plummet worldwide.

The pandemic is still working its way through the globe’s fractured and opaque carbon offsets markets, according to experts and industry players. While there are few signs of trouble so far, some believe the economic and public health crisis sparked by the coronavirus could weaken demand for offsets and put at risk certain forest protection projects.

"In the past year or two, there had been a dramatic boost" of interest in carbon offsets, said Ruben Lubowski, the chief natural resource economist at the Environmental Defense Fund.

"That momentum has — at least for now — been stalled," the environmental group economist said. The question now for the offsets markets is whether the pandemic is "just slowing the boom, or is it really going backward?"

Offsets are sold on a variety of voluntary and compliance markets, and both include a broad swath of participants with widely differing interests.

Voluntary carbon markets are where individuals and companies can purchase offsets for their pollution, even though they aren’t required to do so by law. The voluntary market overall hit an estimated $295.7 million in 2018, the most recent year for which data is available, according to Forest Trends, an environmental finance nonprofit.

Both voluntary and compliance markets are supplied by a wide range of project developers, which can work on the ground with indigenous communities in Brazil to avoid deforestation or with landfill operators in Pennsylvania to reduce emissions of methane, a gas with 28 times the planet-warming potential of carbon dioxide.

The developers’ projects are audited, monitored and certified by other groups that issue and vouch for the quality of their carbon offset credits. Developers or brokers can then sell their credits to oil producers like BP PLC or vacationers looking to offset a trip to Spain.

Many experts believe the consumer portion of the offsets market is likely to tank this year, with governments around the world calling for citizens to make only essential trips and social distancing measures costing tens of millions of jobs. That share, however, represents a relatively minor part of the overall market.

"The percentage of credits that are being bought by folks who are offsetting their flights or their home emissions are pretty small," said David Antonioli, the CEO of Verra, a nonprofit that certifies projects and issues offset credits. "So in terms of the broad carbon market, it comes down to, where are corporates who’ve been doing this?"

Antonioli said he was unaware of any corporations that had abandoned their carbon offset pledges since the onset of the pandemic. In fact, he noted, some, like Delta Air Lines Inc. and oil major Royal Dutch Shell PLC, have recently reiterated commitments to make their heavily emitting businesses carbon neutral by 2050 or sooner (Greenwire, April 16).

Derik Broekhoff, a senior scientist at the Stockholm Environment Institute, is also bullish on the efforts of corporations in both the compliance or voluntary markets.

"I don’t see companies yet abandoning those commitments or those targets," said Broekhoff, who last year was the lead author on a guide to using carbon offsets. "In a lot of cases, they have long-term contracts in place for procuring carbon offsets that will continue to support demand for a while. That piece of the market is not likely to go away right away."

New voluntary corporate climate pledges, however, are likely to be put on hold, according to EDF’s Lubowski.

That’s because of uncertainty about the depth and the length of the recession the world appears to be barreling toward and a lack of splashy international events at which to make such an announcement. Fears of COVID-19, the disease caused by the coronavirus, have already delayed high-profile conferences on climate change and biodiversity, he noted.

But if demand begins to falter because companies or governments abandon their commitments, some carbon credits could go up in smoke, Antonioli acknowledged.

"This is a market," he said. "These projects depend on that revenue coming in to keep their operations going. And if their revenue stops, then — if you’re protecting a forest — you’re going to start thinking, maybe we need to get some timber or clear some more land."

Even before the pandemic threatened to cut off financial support for carbon offset projects, an investigation last year by the nonprofit newsroom ProPublica found that forest preservation efforts often failed to prevent widespread deforestation.