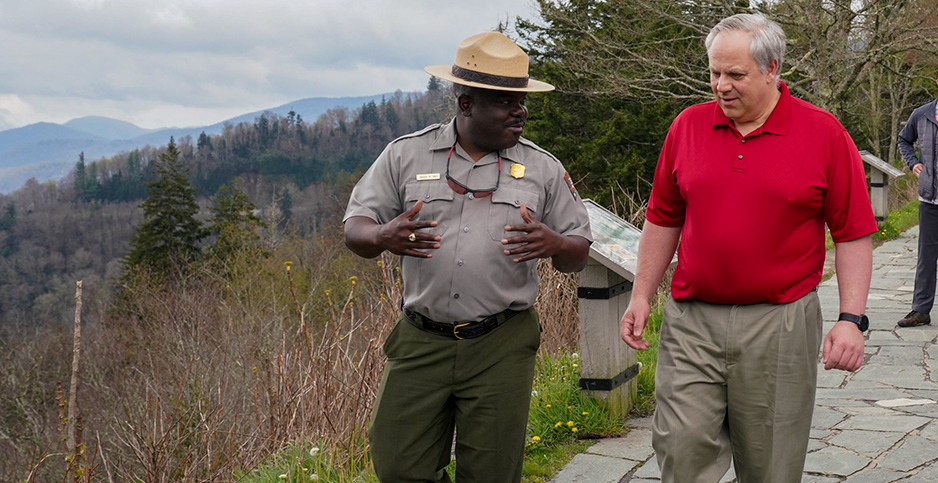 Interior Secretary David Bernhardt is on a media blitz, popping up on talk radio programs and podcasts, appearing in local newspapers, and tweeting at a pace President Trump might admire.

Although much of the coverage is spurred by Bernhardt’s tri-state tour to promote the reopening of public lands closed during the coronavirus pandemic, it marks a clear shift for the lawyer and former lobbyist who has cultivated a reputation as a workhorse.

Could it be that Bernhardt — who as deputy to then-Secretary Ryan Zinke described himself as the "understudy" — is enjoying the spotlight?

"Secretary Bernhardt has found himself in a good position to be able to understand the current situation and the challenges that we face and is stepping up and communicating more during these difficult times," said Matt Dempsey, a consultant at FTI Consulting with clients in the oil and gas industry. "It’s something the public recognizes and appreciates, especially in the West where so many of our public lands are and the role that the government plays."

Dempsey added: "He obviously has the confidence of the president. When you’re facing the challenge we’re in now, it’s important for members of the administration to step up and become more public facing."

Bernhardt spent four days last week visiting National Park Service units in North Carolina, Tennessee and Virginia. During the trip, Bernhardt was alternately photographed with and without masks as he visited with NPS employees and private businesses to promote the Trump administration’s "Opening Up America Again" plan.

"The president is doing everything he can to get this country heading in the right direction again. We’re on track," Bernhardt said in a May 7 radio interview with Greenville, N.C.-based Inner Banks Media.

But he also reiterated he would work along with state and local governments "to make sure we’re ready to go."

"My entire plan throughout this crisis has been we looked at every facility, every service, every unit, and then trying to align those with various mitigation strategies," Bernhardt said.

He made similar remarks during an April 22 White House event, stating at the time: "We’ll run right along the side of the governors" (E&E News PM, April 22).

But more than merely hyping the Trump administration’s response to the coronavirus epidemic, Bernhardt’s remarks are often laced with campaign-year rhetoric.

"My view is everybody should vote because our rights can be taken away, but this election really is more important than any other," Bernhardt told the National Rifle Association’s American Hunter in an interview conducted in January at the National Shooting Sports Foundation’s annual SHOT Show but published last week.

Bernhardt, asked how he would encourage voters to turn out in November, continued: "You will see quite a contrast in who you’re listening to. If you like President Trump’s policies, the choice is clear, and our track record is good."

He also lavished praise on the president for nominating him to lead Interior.

"I love the president’s vision and his belief that government should serve the people," Bernhardt said. "And I love the DOI’s mission, and I thought I could help him with that. My job is to tell the president, ‘Sir, you told me to do X, Y and Z, and I did it,’ and to have him say, ‘Mission accomplished.’"

Ahead of the COVID-19 pandemic that has dominated national conversation for weeks, Trump had likewise offered praise to Bernhardt.

"When you work with him, he’s beautiful because he gets it done," Trump added.

Bernhardt likewise showed up in a February photograph featuring a plane packed with Republicans all wearing "Keep Iowa Great" hats on social media.

The Colorado native’s role in campaign events is notable, given concerns voiced by some observers that Bernhardt — despite his previous service in the Trump and George W. Bush administrations and long tenure as an energy lobbyist — wasn’t enough of a "political leader" to claim the secretary’s office ahead of his nomination (Greenwire, Dec. 17, 2018).

But Western Values Project Director Jayson O’Neill, a critic of Bernhardt and the Trump administration, said the recent media blitz could be an effort by the secretary to retain his job.

"If you’re not on the top of President Trump’s mind, then you’re on the way out," O’Neill asserted.

He suggested Trump’s attention could be turned by former Rep. Jason Chaffetz (R-Utah), who slammed the Interior Department in an op-ed published by Fox News last week.

"Counter to science and common sense, the Interior Department is keeping far too many of our national parks closed," Chaffetz wrote.

He offered similar missives on Twitter last month, one of which Bernhardt responded to, writing: "Nothing like the great outdoors! We are working to keep your public lands accessible to you and the American people."