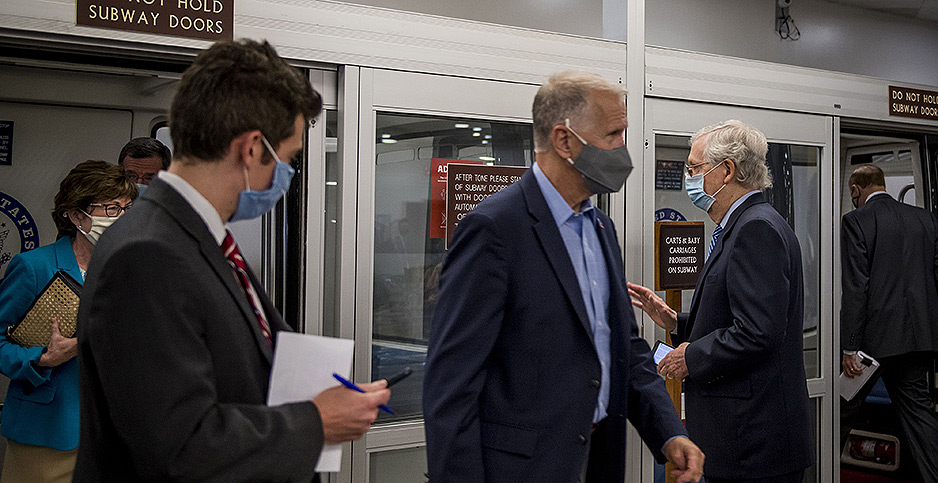 Lawmakers and reporters in the Senate subway last week. Sen. Thom Tillis (R-N.C.) (center) is among the lawmakers who has tested positive for COVID-19. Senate Majority Leader Mitch McConnell (R-Ky.) did not say Friday whether he had been tested. CNP/AdMedia/SIPA/Newscom

Senate Majority Leader Mitch McConnell (R-Ky.) scrapped plans for the chamber to be in session the next two weeks after three senators tested positive for COVID-19 in recent days, although Republican leaders insist it won’t alter their plans for having confirmation hearings for Supreme Court nominee Amy Coney Barrett next week.

McConnell announced the schedule shift Saturday — a day after President Trump was taken to Walter Reed National Military Medical Center, where he continues to be treated for the novel coronavirus. The Senate was set to consider judicial nominees this week.

"The Senate’s floor schedule will not interrupt the thorough, fair and historically supported confirmation process previously laid out," said McConnell.

Both Tillis and Lee said they would isolate for the next 10 days and would be ready for the hearings. Republicans have ridiculed House Democrats for conducting legislative business remotely, but McConnell suggested members could participate via webcast.

"Since May, the Judiciary Committee has operated flawlessly through a hybrid method that has seen some senators appear physically at its hearings while other members have participated virtually. The committee has utilized this format successfully for many months while protecting the health and safety of all involved. Certainly, all Republican members of the committee will participate in these important hearings," he said.

Judiciary Chairman Lindsey Graham (R-S.C.), who is in a highly competitive bid for reelection, said during a debate Saturday night that Barrett’s hearing would be held "safely." He added, "I’ve got a job to do, and I’m pressing on."

The Judiciary Committee allows for proxy voting, but the practice is forbidden on the floor. Should more Republicans get sick, that could derail plans to confirm Barrett before the elections.

Other senators, among them Ted Cruz (R-Texas) and Ben Sasse (R-Neb.), both Judiciary members, said they would self-quarantine after interacting with colleagues who now have COVID-19.

Sen. Ron Johnson (R-Wis.), who is not a member of Judiciary, also tested positive in recent days and is under self-isolation.

McConnell, during a news conference in Kentucky on Friday, snapped at a reporter who asked whether he had been tested recently. He refused to answer.

Senate Democrats blasted their GOP colleagues for moving ahead with the Barrett nomination amid the virus outbreak.

In a letter to Graham over the weekend, Judiciary Democrats argued that going ahead with the nomination "threatens the health and safety of all those who are called upon to do the work of this body."

They also called a potential video hearing "inadequate" and one that ignored the gravity of the Senate weighing in on a Supreme Court nomination.

Senate Minority Leader Chuck Schumer (D-N.Y.) said the latest outbreak underscores the need for a "testing and contact tracing program for senators, staff and all who work in the Capitol complex," a move McConnell and House Speaker Nancy Pelosi (D-Calif.) have both resisted.

The House is not in session between now and the elections but could return if there is a deal on pandemic relief legislation (see related story).

Pelosi, who in recent days tested negative for the virus, said on CBS News’ "Face the Nation" yesterday that she has confidence in the "reliability of the testing in the Capitol."

"Perhaps there could be some sampling. Let’s depend on science on how to deal with it," she said.