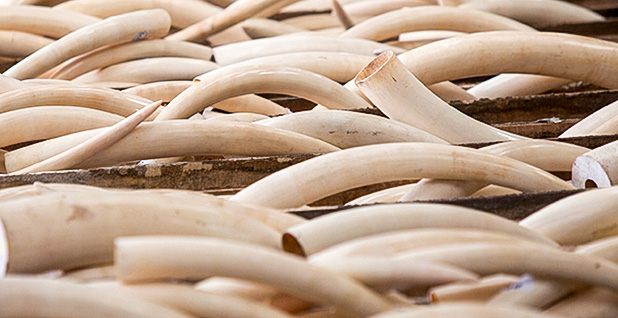 The global coronavirus pandemic, a shortage of African language interpreters and second thoughts about a plea agreement have all complicated the prosecution of a suspected rhinoceros horn, elephant ivory and heroin trafficking ring. International Fund for Animal Welfare

The COVID-19 pandemic, an esoteric African language and second thoughts about a plea agreement have all complicated the prosecution of a suspected rhinoceros horn and elephant ivory trafficking ring.

The complications, which include the length of time required to extradite one suspect from Senegal, have slowed resolution of a case unveiled by federal prosecutors 11 months ago. They also show, though, the peculiar challenges that inevitably arise with international wildlife investigations (Greenwire, July 19, 2019).

The latest hiccup happened Friday, when the initial attorney for Moazu Kromah, one of four defendants, advised that a potential plea agreement had stalled and that he was being replaced.

"It was our belief that we would be able to reach a resolution on this matter, however it seems things have changed," defense attorney Conor McNamara wrote.

McNamara said that "had it not been for the COVID-19 lockdown, we would have been able sit with Mr. Kromah and explain to him the plea offer," which McNamara said was the result of "good faith negotiations" with prosecutors.

Instead, McNamara revealed that Kromah’s family members informed him that they "intend to hire a new attorney on the case and have not given me an answer as to his position on the plea offer." In an earlier filing, the attorney said Kromah needs a Mandingo interpreter.

Mandingo is a language spoken in Guinea, Gambia and parts of Senegal.

Last June, prosecutors in the Southern District of New York announced the indictment of Kromah and three alleged co-conspirators. The men are accused of scheming to traffic 190 kilograms of rhinoceros horns and about 10 tons of elephant ivory from various countries in East Africa.

"The alleged enterprise, responsible for the illegal slaughter of dozens of rhinos and more than 100 elephants, was as destructive to protected species as it was lucrative," Geoffrey Berman, U.S. attorney for the Southern District of New York, said at the time.

The indictment added that "in certain Asian countries, rhinoceros horn is worth more than gold because of beliefs that it can cure various ailments and illnesses."

Hinting at the extent of the investigation conducted by the Fish and Wildlife Service and other agencies, the prosecutors’ material subject to discovery in Cherif’s case is "approximately one terabyte of information, consisting of video and audio information," according to a court filing.

One terabyte of storage could hold about 500 hours of video or about 2 million photographs.

"There are a significant number of videos of meetings with Mr. Kromah and his co-conspirators in which they discuss elements of the scheme," Assistant U.S. Attorney Jarrod Schaeffer advised a judge last July, a hearing transcript shows.

Schaeffer added that there are also bank documents and "records of chats, specifically WhatsApp messages between various individuals involved in the scheme."

Investigators, deploying a confidential source, determined the defendants exported the rhinoceros horns and elephant ivory to buyers in Manhattan and elsewhere, in packaging that concealed the items as pieces of art such as African masks and statues.

The two citizens of Kenya who remain at large are each charged with one count of conspiracy to distribute and possess with intent to distribute 1 kilogram or more of heroin.