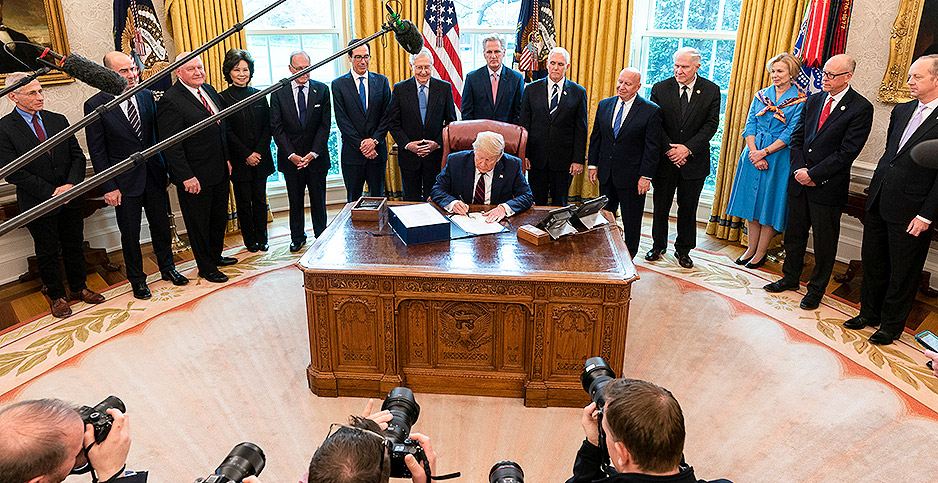 There’s an echo of climate policy in the federal government’s plan to send most Americans a check.

Congress has responded to the coronavirus pandemic and its associated economic shocks by passing the Coronavirus Aid, Relief and Economic Security (CARES) Act, a $2 trillion relief package that includes one-time payments of $1,200 to most adults along with $500 for children.

The parallels aren’t perfect. One policy is an ad hoc emergency response with short-term goals, while the other is a long-discussed plan crafted to work over decades.

Still, CARES offers climate policymakers a preview of how fee and dividend might work in practice — along with some of the administrative snags that could potentially await. CARES also represents a step toward normalizing direct cash payments, especially among Republicans, though it’s too soon to know if this crisis-era policy signals a durable shift.

"You have Republicans actively calling for cash transfers to households. And that is a new thing," said Joseph Majkut, director of climate policy at the free-market Niskanen Center. Before the pandemic, he said, cash transfers had been a major sticking point with conservative lawmakers.

There are two central components to fee-and-dividend plans. The first part is a carbon price to raise the costs of emitting greenhouse gases; that extra cost is meant to pressure companies and individuals to burn less fossil fuels. The second part is monthly payments to households; that dividend is meant to offset the costs of higher energy prices, with most people receiving more money than they paid.

"A lot of households are being affected by shutdowns for [COVID-19], right? A collective action is imposing costs on some people. And they’re seeing a cash transfer from the government is going to smooth out the stresses from that," Majkut said.

"And that’s not particularly different from the fee-and-dividend model."

The spotlight on direct payments is also revealing the government’s shortcomings.

Confusion and delay have characterized the federal implementation of CARES. Designed as immediate relief, the direct payments are unlikely to reach many people for months, according to the Internal Revenue Service.

Checks could be delayed until August or September unless the IRS already has a taxpayer’s direct deposit information.

People who are homeless, undocumented or otherwise didn’t file income taxes could have trouble collecting their payments — meaning help could bypass those who need it most.

Similar criticisms have been leveled at fee-and-dividend plans.

Michael Gerrard, director of Columbia University’s Sabin Center for Climate Change Law, said the problems with CARES could have implications for carbon pricing.

"Hopefully the IRS will identify the kinks during the current process and figure out how to fix them, so that if a tax and dividend program is adopted some day, it will go smoothly," he said in an email.

A fee-and-dividend system would presumably accompany a full legislative and regulatory process, so it probably wouldn’t suffer the same problems as a program constructed on the fly, Majkut said.

There’s a deeper risk here, too, some experts said. If voters are disappointed in the direct payments or view them as part of a bungled pandemic response, then they might sour on major government programs in general.

"Voters are going to learn from this experience whether or not big government can effectively address existential challenges," said Alex Flint, executive director of the Alliance for Market Solutions.

"It may be that it instills confidence in the government’s ability to address climate change. But it could also diminish the government’s standing in a way that makes it harder to achieve important policy," he said.

Greg Bertelsen, executive vice president of the Climate Leadership Council, said in a statement that there’s a limit to drawing too many comparisons between COVID-19 and climate policy.

But one important takeaway, he said, is that support for direct payments was bipartisan.

"After we recover from the current crisis, climate change will similarly be an issue that Republicans and Democrats will have to work together to address — that is the only way we will find a lasting solution," he said.