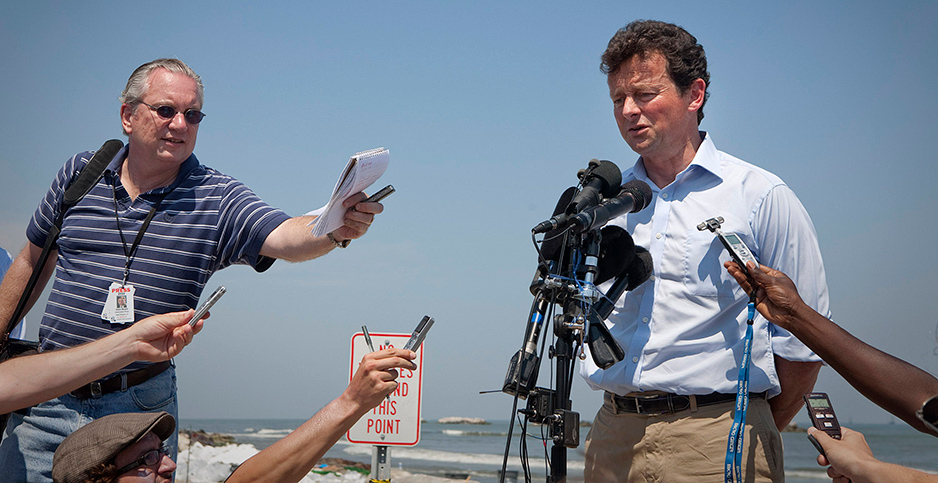 Tony Hayward, then the CEO of BP, speaks to the media after viewing cleanup efforts at the site of beached oil from the Deepwater Horizon oil spill in Port Fourchon, La., on May 24, 2010. Lee Celano/Reuters/Newscom

BP PLC’s poor crisis management in the immediate aftermath of the Deepwater Horizon explosion 10 years ago was one of the lasting legacies of the environmental disaster.

But some who were involved say the federal government’s initial response to the current coronavirus pandemic shows it didn’t learn.

"Now, you have this every day, a constant bombardment of fear," said Glenn DaGian. "Then, as now, timely, credible information assuages fear."

DaGian had retired from BP a year before the catastrophe. But he returned after the oil giant’s first public relations missteps.

The Louisiana native said there are many similarities between then and now, with the broad "exception that the scale is so much different," referring to the explosion killing 11 workers and injuring dozens more, while the pandemic has killed at least 166,000 worldwide.

Immediately after the spill, BP executives strolled the Gulf of Mexico’s beaches in starched white shirts. They said the accident wasn’t their fault. And they blamed contractors.

President Trump and his administration’s early messages about the coronavirus, which causes COVID-19, were similarly mixed.

Beginning in February, Trump’s comments on the virus have included: stating testing is widely available (later walked back by his administration), claiming widespread testing is unnecessary, comparing the coronavirus to a seasonal influenza, declaring a national emergency, and saying it will disappear "like a miracle."

Experts said those messages have created a confusing narrative for the public to follow.

"The danger in providing inaccurate or politically motivated information in a pandemic," John Cohen, former acting undersecretary for intelligence at the Department of Homeland Security, told ABC News, "is that people will either panic because they don’t have confidence that the government is protecting them, or people will disregard the crisis altogether and fail to take the safeguards to protect themselves, their family and their communities."

Christopher Reddy, a scientist at the Woods Hole Oceanographic Institute in Falmouth, Mass., has spent his career studying oil spills and quickly went to the Gulf of Mexico after the Deepwater Horizon accident.

Like DaGian, he said one of the key similarities between the Deepwater Horizon and coronavirus responses is the uncertainty surrounding the two crises. For Deepwater Horizon, it was immediately unknown how long it would take to plug the well, and fears grew larger when an underwater camera began showing the millions of gallons of oil constantly seeping out.

For the coronavirus, it is unknown how quickly a vaccine can be developed.

But Reddy pointed to a key difference between the two events: Dr. Anthony Fauci, the director of the National Institutes of Health’s National Institute of Allergy and Infectious Diseases, who has been helping lead the administration’s response.

"What Fauci is doing will go down in history," Reddy said. "There are going to be classes that talk about how Fauci did this."

Reddy and DaGian said that providing clear, verified information is key after a crisis, and they cautioned against misinformation and casting blame.

That, DaGian said, is the only way to address a fear that strikes him as similar to what he saw among fishermen and the countless other businesses affected by the spill.

"Every day you had this constant bombardment of turning on the TV and watching the oil spill out of that pipe," he said. "But now, your fear has increased because of financial instability and images of bodies in New York in a tractor-trailer."

He added that it’s a "different concept of fear and anxiety."

"Not only are their livelihoods but their lives could be threatened," he said, "but the fear was palpable in both situations."

Reddy emphasized the importance of reports from the first responders both in the Deepwater Horizon crisis and now during the pandemic.

And he sounded a note of optimism.

"I have to believe — and am convinced — that as bad as it is, it’s not going to be as bad as we think and the credit will go back to the people on the front line," he said. "Just like Deepwater."